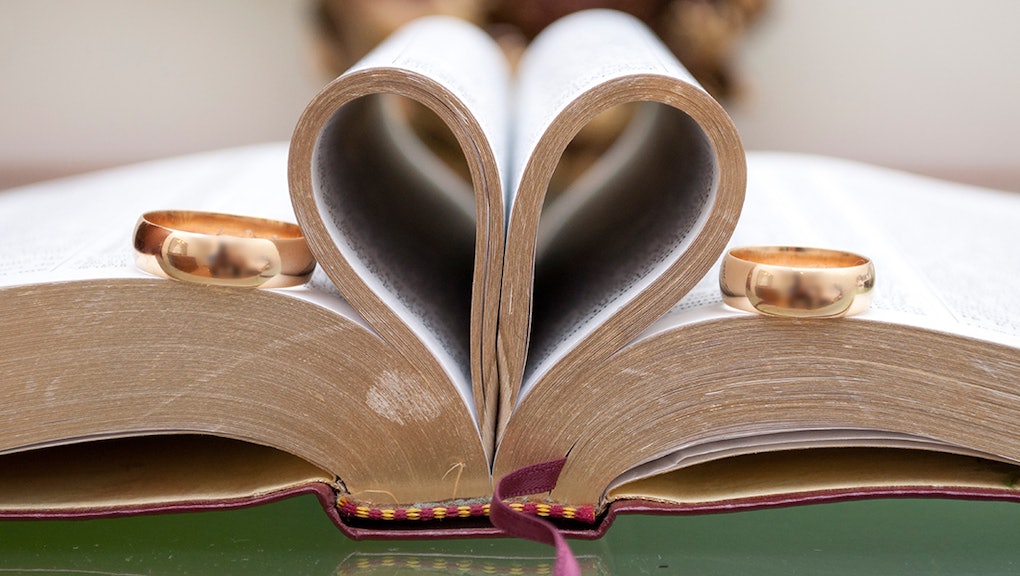 7 Simple Tips for a Successful Fundamentalist Christian Marriage, According to the Bible

Republican presidential candidates from moderate contender Jeb Bush and evangelical Christian Mike Huckabee to the truly aggressive Donald Trump all agree: The Supreme Court ruling that legalized same-sex marriage nationwide Friday is terrible. Many of them leaned on arguments gleaned from the Bible to make their point, insisting God's word is a literal instruction manual for public policy in the 21st century.

But what if that shoe was on the other foot? Here are eight passages taken verbatim from Christianity's holy book that, if as applied as virulently as the scant references to same-sex relationships in the Bible, might give Americans some disturbing tips on how to manage a truly successful fundamentalist marriage.

Note: For consistency, all passages are taken from Bible Gateway's searchable online archive of the New International Version.

1. Let the husband run the show.

"Wives, submit yourselves to your own husbands as you do to the Lord. For the husband is the head of the wife as Christ is the head of the church, his body, of which he is the Savior. Now as the church submits to Christ, so also wives should submit to their husbands in everything." - Ephesians 5:22-24

The Bible also commands men to love their wives as themselves and take their well-being into account when making decision, but this passage is pretty clear: At the end of the day women should submit to their husbands' decisions.

So better hope you married one of the good ones, ladies!

For all Christian conservatives' talk of "traditional" gender roles as fair to both man and wife, the Bible is pretty clear about this being a hierarchical relationship.

3. Seriously, listen to your husband and otherwise shut up.

"A woman should learn in quietness and full submission. I do not permit a woman to teach or to assume authority over a man; she must be quiet. For Adam was formed first, then Eve. And Adam was not the one deceived; it was the woman who was deceived and became a sinner. But women will be saved through childbearing — if they continue in faith, love and holiness with propriety." - 1 Timothy 2:11-15

Christian website Ship of Fools refers to this passage as the "worst verse in the bible." In it, St. Paul says women shall never be permitted to serve as priests in the Christian church and instead commands them to earn their place in heaven through a life of permanent subservience through childbearing.

It also instructs men to be suspicious of their wives — and more broadly, all women — who are weak creatures easily bent by temptation and sin.

"If he marries another woman, he must not deprive the first one of her food, clothing and marital rights." - Exodus 21:10

Just make sure that the first wife is prioritized appropriately. She might get jealous!

"If a man happens to meet a virgin who is not pledged to be married and rapes her and they are discovered, he shall pay her father fifty shekels of silver. He must marry the young woman, for he has violated her. He can never divorce her as long as he lives." - Deuteronomy 22:28-29

But as Christian site Got Questions explains, this passage is actually countered by Exodus 22:17, which gives the rape victim's father the right to refuse the marriage and just fine the rapist 50 silver shekels instead. It could also "be viewed as merciful to the woman, who, because of the rape, would be considered unmarriageable."

"This is why the passage leaves marriage to the discretion of the father, because every situation is different, and it is better to be flexible than have a blanket rule," added Got Questions.

"... so [Sarai] said to Abram, 'The Lord has kept me from having children. Go, sleep with my slave; perhaps I can build a family through her.' Abram agreed to what Sarai said." - Genesis 16:2

Confronted with a barren womb, Sarai and her husband Abram turned to awful methods that were fortunately later endorsed by God.

It's not said whether Sarai's slave, Hagar, consented to the sexual encounter, but one might assume no such thing as real consent exists under the considerations of slavery.

As the Annotated Bible points out, Hagar was impregnated by Abram, beaten by Sarai out of jealousy, fled and then ordered to return by an angel so that her rapists' son could grow up to be the famous Ishmael of the Israelites.

"If a man commits adultery with another man's wife — with the wife of his neighbor — both the adulterer and the adulteress are to be put to death." - Leviticus 20:10

God was pretty clear on this one: Cheating spouses should be executed.

But this is a selective reading of the Bible, trimmed to its worst parts!

That's precisely the point. These passages come from many sources that range significantly in style, message and tone, and they're mostly over 2,000 years old. The Good Book has to be read in its original context. Reducing the Bible to a series of literal instructions devoid of that perspective makes many of the passages seem extremist.

As the Not All Christians Are Like That Project explains on their website, the few references to homosexuality in the Bible are taken from the same kinds of fire-and-brimstone sections as those endorsing polygamy, executions and violent misogyny, or otherwise likely contextually refer to male prostitution or rape committed by the Roman Empire.

The rapidly growing population of religiously unaffiliated or less-religious Americans has little desire to debate the arcane particulars of a holy book that does not strictly dictate every aspect of their lives. Freedom of religion necessarily suggests a degree of freedom from religion. As the Supreme Court ruled last week, the civil institution of marriage cannot be limited by the bigoted demands of the shrinking minority of the population that wants to impose their religion on others.

"Their hope is not to be condemned to live in loneliness, excluded from one of civilization's oldest institutions," Justice Anthony Kennedy wrote in the court's majority opinion. "They ask for equal dignity in the eyes of the law. The Constitution grants them that right."