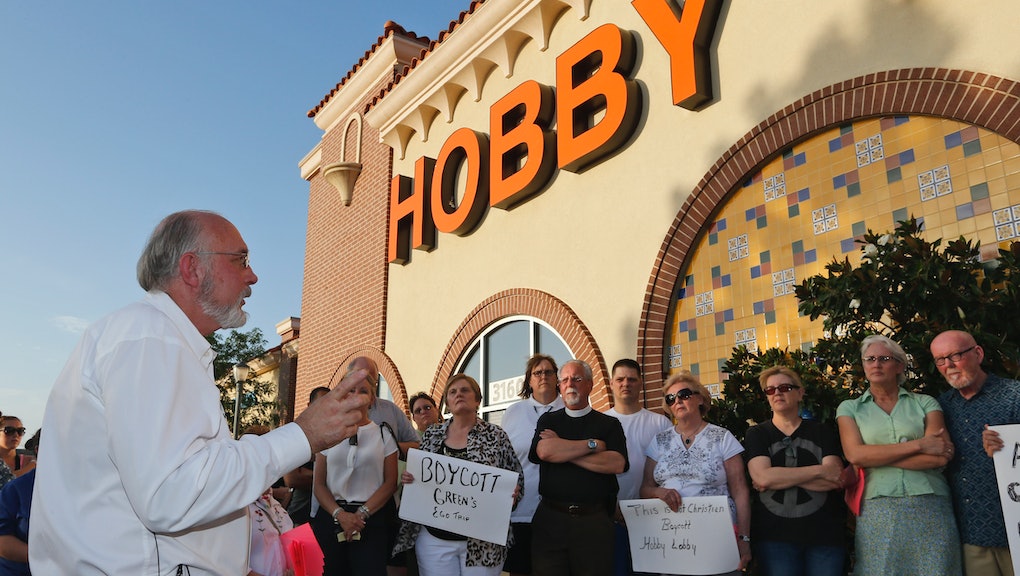 As a heterosexual white man of a certain age, Republican presidential hopeful Mike Huckabee has probably not done much personal grappling with birth control access. And yet, he has some strong beliefs about contraception.

In 2014, the former Arkansas governor said placing on the federal government or an employer the burden of providing birth control is an "insult" that makes women "believe that they are helpless ... because they cannot control their libido or their reproductive system without the help of the government."

Unfortunately, he's not the only person with political clout who believes this. In fact, one year ago the United States Supreme Court ruled in the now-infamous Hobby Lobby case that birth control is not an employee's right and that corporations don't have to provide employees with contraceptives if doing so is an affront to their owners' religious beliefs.

But contrary to what Huckabee and his cohorts believe, birth control access is hardly just about women's (apparently) raging libidos, but in fact empowers women in a variety of ways. Here are just seven examples of opportunities that empowerment has created in women's lives.

1. To pursue educational and professional opportunities

Contraception is hardly just a helpful trick women use to avoid having children, but is in fact critical to ensuring that they achieve goals like educational success and thriving careers. In fact, 51% of women who participated in a 2012 Guttmacher Institute study reported that contraception allowed them to complete their education. More recently, women have anecdotally confirmed this point using the hashtag #BirthControlHelpedMe.

2. To treat a variety of medical conditions

The fact that birth control is often prescribed to treat a variety of medical issues like endometriosis, polycystic ovary syndrome and other menstrual-related disorders is often overlooked. Yet 1.5 million women rely on the pill exclusively for these non-contraceptive purposes, according to the Guttmacher Institute. Studies also show that, after using the pill for just one year, a patient's risk of developing uterine cancer reduces considerably, as does their risk of developing ovarian cancer.

Research shows that the advent of birth control accounts for 30% of the narrowing of the known gender wage gap by 1990, according to Planned Parenthood. This may largely be attributable to the fact that reproductive control allows women to pursue professional opportunities. Half of the women who responded to the 2012 Guttmacher survey, for example, said that using birth control enabled them to obtain and keep a job. Sixty five percent reported that they use contraception to avoid the cost of a child.

Politicians who oppose widespread access to contraception and promote abstinence-only sex education also tend to be pro-life — politicians like Rick Santorum, Scott Walker and Lindsey Graham, just to name a few. And yet abortion rates are actually higher in countries like where women have limited access to contraception, according to a 2003 Guttmacher Institute analysis. Allowing women access to birth control — not to mention educating them about how to effectively use it — reduces abortion rates which, ultimately, benefits everyone.

5. To take control of unhealthy relationships

Although it's not frequently discussed, birth control actually plays a significant role in many women's experiences of domestic violence. Some abusers subject their partners to "contraceptive sabotage," in which an abuser forces their partner to forego birth control or intentionally impregnates them in order to keep them in their unhealthy relationship.

Access to birth control can also empower survivors to leave abusive relationships and alleviate them of potential custody battles or other child-related complications when they do.

The pill is often cited as a crucial element of the sexual revolution. Being able to avoid unwanted pregnancies in the 20th century allowed women to safely explore their sexuality, bucking the idea that only men enjoy sex — and undeniably continues to do so in the new millennium. It might not be a matter of life-or-death or statistically quantifiable, but empowering women to explore this significant aspect of their lives free from shame is as good a reason as any to advocate for birth control.

7. To have children only if and when they are ready

It may be the most obvious and oft-cited reason women need access to birth control, but it's a truly salient one: Birth control enables women to have children only if and when they are ready to do so. About 43 million of the 61 million U.S. women in their childbearing years are both sexually active and do not want to become pregnant, according to the Guttmacher Institute. That's a huge number of women who need and have every right to comprehensive birth control that will make this desire a reality.

But even beyond these general reasons for birth control access, it's crucial to note that many specifically need — and should have a right to — birth control provided by their employer, despite the Hobby Lobby ruling. As Justice Ruth Bader Ginsburg noted in her dissent, "the cost of an IUD is nearly equivalent to a month's full-time pay for workers earning the minimum wage."

While at the time of the ruling the Obama administration said it may try to find alternative contraception options for American women — the majority of whom, it's worth noting, opposed the Supreme Court's decision on this case, according to one survey — little has been done to this end. As the 2016 election heats up and GOP candidates continue to make statements that support the tenets of this decision, therefore, it's crucial that women continue to speak up and out against these harmful beliefs and make it known that birth control is an essential right we're not willing to let go without a fight.