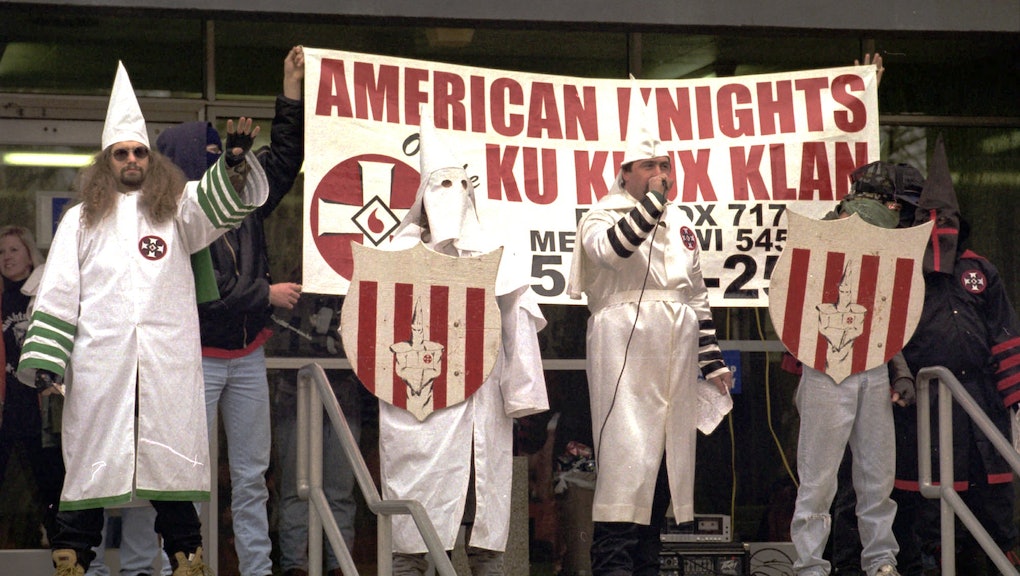 In the aftermath of a white supremacist shooting that left nine dead at a historically black church in Charleston, South Carolina, the Ku Klux Klan is stepping up to make their voices heard.

A North Carolina chapter of the United States' most notorious hate group has reserved a public space outside the Statehouse grounds in Columbia, South Carolina, for July 18 from 3 to 5 p.m. to protest the potential removal of the Confederate battle flag from the Capitol premises. Support for the removal quickly gained steam across both political parties last week in the aftermath of the massacre.

Though there is no direct connection between the KKK and Roof's activities, their shared interest in white supremacism are nearly impossible to ignore. The reemergence of the Klan should remind everyone that far from a relic of the distant past or a joke in Forrest Gump, the hooded hate group remains alive and well in the United States and is considerably more active than most people realize.

Below are six surprising facts about the 21st-century KKK.

Anyone who thought the Klan belonged to the past or was confined to the most racist pockets of the deep South should think again. According to the Southern Poverty Law Center, active Klan chapters operate in half of U.S. states. This includes both predictable places like Mississippi, Alabama and South Carolina and more surprising ones like the liberal bastions of New York, New Jersey and Illinois.

Internal rivalries and government infiltration led to a general Klan crackup around the 1970s. That disruption took a toll on membership, the SPLC said: From rolls that ran into the millions in the 1920s, the Ku Klux Klan of modern times has shrunken considerably to an estimated 5,000 to 8,000 active members. The figure represents just a fifth the number of Klan members estimated to have marched on Washington at their height in 1925, but it's nevertheless a considerable size.

Unlike in previous decades, when powerful Klan chiefs like William Joseph Simmons and Hiram Wesley Evans commanded millions of followers, the modern KKK is no longer a unified group. Many chapters operating across the country have no official relation with one another and often have their own parochial rivalries, the SPLC reports.

4. The Klan Has a special YouTube show just for kids.

Until at least 2013, the grandson of pastor and Klan chief Thomas Robb hosted a regular YouTube show, called The Andrew Show. Under the channel name AShowForWhiteKids, the roughly 9- or 10-year-old Andrew Pendergraft spread the Klan message to children. In one episode, the young Andrew reads emails from concerned white fans about struggles they face in their daily lives. Inquires to the show and pastor Robb were not returned. The elder Robb can also be seen on his own regular show, This is the Klan.

5. This former Grand Wizard of the Ku Klux Klan is surprisingly well-connected to U.S. Congressmen.

David Duke, Ex-Grand Wizard of the Louisiana-based Knights of the Ku Klux Klan, said he had known and met with Louisiana Congressman Steve Scalise (R) on numerous occasions. Scalise, who is now House Majority Whip, addressed a white supremacists gathering in 2002. Duke told CNN Scalise was just one of the politicians he was connected with, and that politicos on both sides of the aisle has in the past courted his support. Various media outlets reported Duke was considering a challenge to Scalise in 2016.

Aside from the upcoming protest in South Carolina, Klan and white supremacist rallies remain a ridiculously common occurrence across the country. According to the Anti-Defamation League, eight such events took place in December 2014 alone. A number of the full court meet-ups included "cross burnings" and "paramilitary training."

7. This North Carolina Chapter of The Klan accidentally believes in equal rights for blacks and same-sex marriage.

A look at the application form for the North Carolina-based Loyal White Knights of the Ku Klux Klan appears pretty standard until it declares that each prospective member should be a "believer in the Constitution and the laws of the United States of America." Unfortunately for the Klan, the Constitution and laws of the U.S. have changed quite a bit in the last century. Today, the 14th amendment of the Constitution explicitly guarantees "equal protection of the laws" to "All persons born or naturalized in the United States." Furthermore, thanks to recent Supreme court rulings, "current laws" now include things like school desegregation, interracial marriage and nationwide legalization of same-sex marriage.