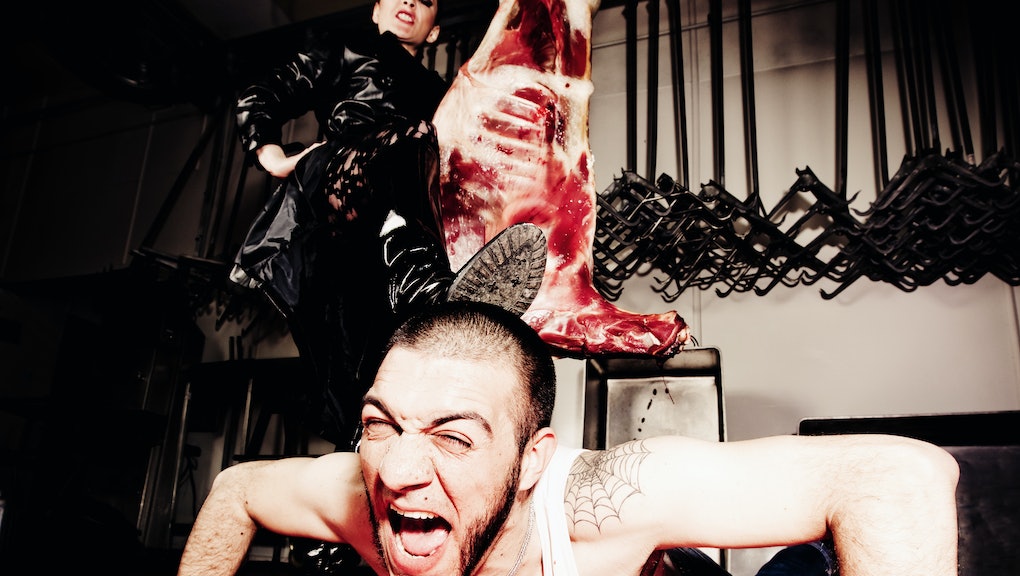 The Surprising Way Some Sex Workers Are Using Periscope

When the Black Widow applies makeup in the morning, scores of people bear witness. She isn't doing anything particularly earth-shattering — she puts on eyeliner one eye after the other, just like anyone else. Next she'll walk down the hall, iPhone in hand, the live video-streaming app Periscope broadcasting every second. More people join in to watch. They'll tell her they love her. Little hearts will float through the air. Next she pulls out a whip. She does a few practice flogs. The crowd goes crazy.

And that's all before breakfast.

Whenever a user starts to stream, all of her followers are alerted with a push notification that they can watch the stream live. After 24 hours, that stream is gone, similar to how Snapchat photos self-destruct after a brief period.

To Mistress Matisse, Periscope is a marketing tool, a way of doing one-on-one personalized videos via private streams.

One roadblock those in the sex industry face is that, most of the time, family-friendly applications are off-limits for adult content reasons. According to Periscope's Community Guidelines, users are forbidden from posting pornographic or overtly sexual content. When that rule is violated, the account is suspended.

Another domme, Mistress Matisse, has built a 1,912-person Periscope following amidst the tight guidelines. She regularly posts questions and holds conversations with her audience. "I think it's just barely beginning to be a thing," she told Mic through Twitter. "And I post a lot of streams of me doing just regular life stuff, to teach my clients 'Hey, this is ... a thing now.'"

More often than not, it's just a way to show her followers she's a real person beyond the flogging.

Early one morning, she asked for their help. "Periscope, I have a pressing need only you can help me with," she said via Periscope. "What should I watch on TV? It's like a quarter of 1 a.m. here and I'm so wound up that I'm not going to sleep for a long time."

Monetizing: For dommes, Periscope is a genius marketing tool. It's a way to manufacture desire. So when it's time to start making money, whether that's through videos or one-on-one sessions, that Periscope-established connection makes the numbers spike.

She found she could do more NSFW business by posting vanilla, even mundane, fully clothed videos of herself. "Sometimes I'll just be walking down the hallway and I'll pop on and say hello," LaFortune told Mic. "It works much better for business because they want to know more, learn more, see more, and this is a great way for them to see me and connect."

And of course, there's legality. A professional domme — versus a lifestyle domme who dominates as a hobby — doesn't have sexual relationships with clients because it can be considered prostitution. The service LaFortune offers is psychological: Her customers fetishize being controlled emotionally.

"They could get a prostitute if they wanted," LaFortune told Mic. "That's a little different from what I do. [Periscope] is a great way to introduce them and so they know [sex] isn't going to happen."

In live-streaming herself, LaFortune's able to create demand not only for her business, but also to attract digital customers who can't meet her in the D.C. area. Then she can convince them to buy video — priced between $2 and $6 per minute — instead of one-on-one sessions.

"The person could be in Japan, and they get a chance to see things I could never do in person with a client," she told Mic. "This has made me more money than any of the other types of work I've done. ... There's times I think I don't even want to see anyone in person anymore because this is so much easier."

Playing by the rules: LaFortune admits to getting kicked off Periscope, but not for intentionally broadcasting nudity. She was getting a room set up for filming a scene for her more explicit, off-Periscope media, and didn't realize she had Periscope going live on her phone. She was, in a word, mortified. "With what I do, I bend people and break them, but I don't break the rules," she told Mic. "I had to make amends and explain why I had done that. They reviewed it and I finally was able to go back on."

As for Periscope's stance on it, it seems as long as the guidelines are met, the vocation of the user isn't important.

LaFortune prides herself on creating a friendly persona when she isn't dominating clients, and she wants to help people figure out what kink culture means for them without feeling ashamed. Periscope offers the perfect forum for anyone curious about kink to ask questions.

"There are a lot of people who aren't happy with what I do," she told Mic. "But this is an interesting way to keep it vanilla enough that people are comfortable asking questions. I'm like the person next door. But I have a whip."