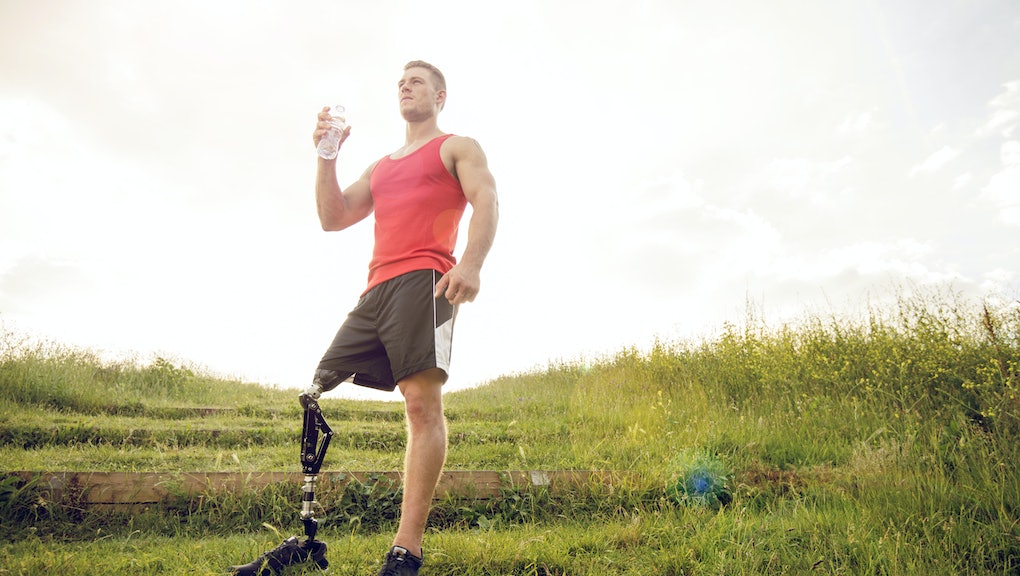 6 Forms of Ableism We Need to Retire Immediately

Nearly 1 in 5 people in the United States has a disability, according to a 2012 Census Bureau report. Yet many forms of discrimination against the disability community not only persist, but are actually largely normalized and even integrated into our culture's very understanding (or, more accurately, disregard) of disabled people's experiences.

Ableism refers to "discrimination in favor of able-bodied people," according to the Oxford English Dictionary. But the reality of ableism extends beyond literal discriminatory acts (intentional or not) to the way our culture views disabled people as a concept. Ableism is also the belief that people with disabilities "need to be fixed or cannot function as full members of society" and that having a disability is "a defect rather than a dimension of difference," according to the authors of one 2008 Journal of Counseling & Development article on the topic, as reported by Feminists with Disabilities.

This interpretation of difference as defect is the true root of ableist acts that cause far too many to feel marginalized, discriminated against and ultimately devalued in this society. Here are just six forms of this behavior that, though largely normalized, need to be retired immediately.

Perhaps the most obvious form of discrimination people with disabilities face is the inability to access places and services open to their able-bodied counterparts — even with laws in place to prevent such inequality.

Ableism has become undeniably naturalized in the English language. Many people not only use words like "crazy," "insane" or "retarded" without a second thought, but many adamantly defend their use of these terms, decrying anybody who questions their right to do so as too "politically correct" or "sensitive." But this personal defense fails to recognize that ableist language is not about the words themselves so much as what their usage suggests the speaker feels about the individuals they represent.

"When a critique of language that makes reference to disability is not welcome, it is nearly inevitable that, as a disabled person, I am not welcome either," Rachel Cohen-Rottenberg wrote in a 2013 Disability and Representation article. But beyond individual feelings, ableist language can contribute to a foundation of more systemic oppression of people with disabilities as a group.

"If a culture's language is full of pejorative metaphors about a group of people," Cohen-Rottenberg continued, that culture is more likely to view those individuals as less entitled to rights like "housing, employment, medical care, education, access, and inclusion as people in a more favored group."

It may not seem like a big deal in the moment, but able-bodied individuals fail to recognize the privilege of having access to every and any space accessible. As Erin Tatum points out at Everyday Feminism, plenty of people may not directly discriminate against people with disabilities but effectively do so by using resources allocated for them. For example, many able-bodied people use handicapped bathroom stalls or take up space in crowded elevators, rather than taking the stairs and leave room for people with disabilities who don't have other options, without a second thought.

While these actions may not be the product of ill will, they are evidence of the way able-bodied privilege manifests in our society. There's a general cultural notion that "disability is something inherently negative," Allie Cannington, a board member of the American Association of People with Disabilities, told Mic. "There's a level of silencing that happens, and erasing of the disabled experience as an important experience because able-bodied experiences are the privileged experiences in our society."

4. Assuming people with disabilities have no autonomy

"There is a very narrow-minded perception of disability," Cannington told Mic. "That narrow-minded assumption that all individuals with disabilities need and want certain things," and assuming those individuals "constantly need help without actually asking the person [if they do]," is a common ableist experience Cannington and far too many others have faced.

"Automatically helping us without asking first should never be done," Tiffiny Carlson said in a 2013 Huffington Post article. "We know when to ask for help. Just wait for us to speak up."

"Able-bodied people will often assume that our existence represents some kind of mystery that they need to get to the bottom of," Tatum explained at Everyday Feminism. But putting the onus on people with disabilities to explain themselves — to essentially describe how and why they live in their bodies — is inappropriate, unfair and insulting.

This frequently occurs, Tatum noted, among young children whose parents allow them to ask people with disabilities what happened to them, presumably because they believe the answer will provide a "social lesson" that underscores "the importance of tolerance and accepting difference." In actuality, allowing children to do so just teaches them that "they are entitled to demand explanation and justification from everyone who's different than them."

"It's not our job to educate anyone, children or adults," Tatum said. "Everyone has the right to go about their day without being accosted."

Though their experiences are undoubtedly distinct from individuals with physical disabilities, people with non-apparent disabilities certainly face ableism as well. There is pervasive stigma surrounding mental illness, for example, and it can and often does lead to inequitable treatment, such as forced institutionalization and medication and a lack of agency in treating one's mental health, Cannington told Mic.

But beyond being denied the autonomy of making personal choices, this form of ableism may even cause individuals physical harm — especially when compounded with race and class. "People with psychiatric disabilities are disproportionately victims of police brutality because of ableism," Cannington said. "It's a huge form of ableism not often named as ableism."

And mental illness is hardly the only non-apparent disability. Individuals who experience learning disabilities, developmental intellectual disabilities and even chronic illness may identify as disabled, for example, but because they are not predominately recognized as such may be denied the help and resources they need.

"As human beings we need to check our privileges in regards to our abilities," Cannington concluded. "In order to harness the power and diversity and innovation of our society, we have to realize that our minds and bodies experience the world in very different ways. If we are able to create access and be more intentional about how we create access, then we are doing everyone good."