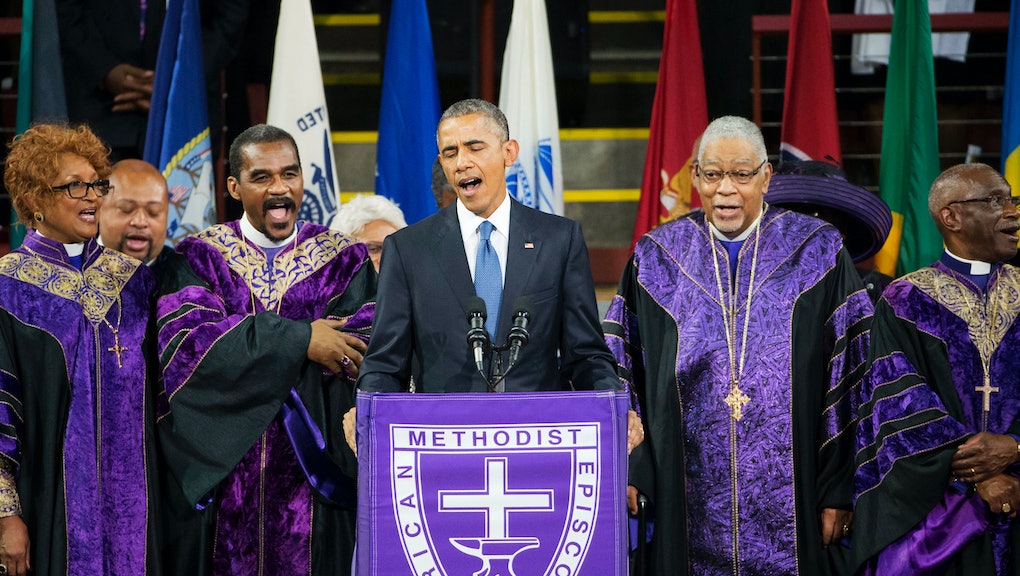 Why June Was the Most Important Month Of Obama’s Presidency

President Barack Obama still has some time left before he leaves the White House, but last month we had a preview of how the public will judge him when he does.

In the space of just two days in June, three events spanning the emotional spectrum from earth-shattering grief to raucous joy provided a vivid glimpse into the president's mark on history. First, the Supreme Court ruled in favor of the Obama administration on the Affordable Care Act, a decision ensuring the survival of the signature policy reform of his presidency. The next morning, the Supreme Court ruled that same-sex marriage was a constitutional right, falling in line with Obama's stance on the issue since 2012. Later that afternoon, Obama delivered an electrifying eulogy at the funeral of Rev. Clementa Pinckney, one of nine victims of the Charleston massacre, in one of the most remarkable rhetorical performances of his presidency, and perhaps the most unrestrained Obama has been on the subject of black suffering since entering the White House.

In June, Obama, once suffocated by the economic crisis and a Republican Party bent on his downfall, was hailed as a game-changer who deserves to be seen as one of the most effective liberal presidents in modern American history.

To put this all in perspective, Mic chatted with William Howell, a political scientist at the University of Chicago who specializes in presidential politics:

Mic: Between the Supreme Court decisions in favor of the Affordable Care Act and same-sex marriage, some people are declaring Obama the most effective liberal president after FDR and LBJ. What do you think of that ranking?

William Howell: If you want to evaluate presidents according to the impact they have had on the larger polity, then of these three, Roosevelt clearly comes out on top. Much more than either Johnson or Obama, Roosevelt altered the expectations that average citizens have of their government. He reshaped the design of the executive branch of government. He remade, in rather profound ways, the relationship between the president and the people. And programmatically, he laid the groundwork for what would later become a vast and modern welfare state.

If, on the other hand, you want to evaluate presidents according to the number of landmark laws enacted on their watch, then a case can be made on behalf of Johnson. By many accounts, the 89th Congress was the singularly most productive Congress of the 20th century. During Johnson's time in office, such landmark legislative achievements as Medicare, Medicaid, the 1964 Civil Rights Act, the 1965 Voting Rights Act and the Elementary and Secondary Education Act all came to fore. The Vietnam War would soon derail the Johnson presidency. For a stretch, though, this Texan who was full of so much swagger and insecurity managed to corral legislators like few presidents before or since.

But, of course, neither of these metrics accounts for the most basic facts about the political environment in which presidents govern. And for a variety of reasons — not least of which relate to the massive Democratic majorities residing in Congress during their terms — this political environment favored both Roosevelt and Johnson.

Obama, by contrast, has held office during an era of dissensus and partisan division. And against considerable odds, he managed to enact hugely important legislation in health care policy and financial regulatory reform. Moreover, he managed to wind down two major wars abroad, unilaterally advance all sorts of regulatory and environmental policies, refashion education policy through waivers and state competitions and a good deal more besides.

Mic: One of your specialties is moving beyond the idea of the presidency as chiefly a position of persuasion, and examining it as an office that instead depends on a great deal of unilateral action. Some examples of this would be how last week Obama announced a major decision to expand overtime pay, or last year's executive actions on immigration. How does he compare to other presidents before him in this regard?

WH: As did the presidents who came before him, Obama has looked for ways to advance his policy agenda outside of a strictly legislative process. Obama has managed to do so in policy domains that, for their controversies alone, have altogether eluded congressional action.

I do not know of any evidence, though, that Obama is exercising these powers with any more frequency than other presidents. By some counts — in particular, the issuance of executive orders — his numbers have dropped off. Still, Obama has managed to make his own distinctive mark on the president's arsenal of unilateral powers.

Mic: The Affordable Care Act has opened up the door to universal coverage — an accomplishment that has eluded many presidents since at least Harry Truman. But it has also locked in a health system governed by private insurers who can still bankrupt people with fees. By contrast, programs like LBJ's Medicare and Medicaid established the idea of health care as a government-guaranteed right for the vulnerable. In a historical context, how important is the ACA?

WH: It remains something of an open question, I think, what impact the policy will have on the longer-term health of the nation and the costs of health care provision. The early signs are positive, but much depends upon how states respond to a policy that, in the aftermath of the recent Supreme Court ruling, is only now destined to stay.

It is much easier, though, to assess the contribution of the ACA to Obama's legacy. Now that the Supreme Court has upheld it, they are considerable. In part, this is because of just how difficult it was to win the prize. As you note, presidents for decades have sought and failed to enact policy of this sort. But the ACA's impact spreads further still, reshaping the relationship between the government and private insurers, altering the expectations that citizens have of their government, fashioning new dependencies and public ventures between the federal and state governments.

Mic: Can you put the Supreme Court decision on same-sex marriage into historical perspective? It isn't by any means the end of the journey for LGBT equality, but is this on the scale of 1960s-era civil rights legislation combating the exclusion of racial minorities from American institutions?

WH: The recent decision in Obergefell v. Hodges works on two very different, but ultimately complementary, levels. Materially, it extends new rights and privileges to a group long excluded from the larger polity. By allowing gay couples to marry, the Supreme Court opened up new opportunities for these men and women to participate in end-of-life decisions, to file joint taxes, to represent one another before the state and their communities, and so much more besides.

The second level, though, may ultimately prove more important in the fight for LGBT rights. It functions at the level of symbolism. Marriage is a foundational institution to our collective experience. It structures our relationships with one another. It offers a vessel for our shared and intimate values of dedication, commitment and love. And in many households around the nation, marriage functions as the bedrock of family. Justice Anthony Kennedy understood the importance of this second level, which helps explains the soaring rhetoric of his majority opinion.

Still, in at least two ways, this decision differs from previous legislative efforts to push for voting rights, school and housing desegregation, gender equality in college sports and the like. First, it does not recognize gays — unlike African-Americans or women — as a legally protected class. Second, it does not lend any financial resources in the fight against discrimination's lasting effects on American society. It opens a door, and a culturally vital one at that. But it does not enjoin the federal government in any larger positive effort to rout out discrimination against members of the LGBT community.

Mic: During his first campaign for the White House, Obama delivered a mesmerizing speech about race that showcased his unique capacity to bridge racial divides in American society. Yet as president, the topic has been a thorn in his side. Progressives have criticized him for being unfairly critical of the black community and his reluctance to be as vocal as he could be on the spate of black deaths at the hands of the police. But some people think he found his voice as a healer during his eulogy for Rev. Pinckney after the Charleston massacre. What do you think?

WH: The speech Obama gave in Charleston was sensational — personally moving and deeply insightful. Insofar as he hadn't given an equivalent speech earlier in his time in office, this one represents something of a turn in his administration. I'm not sure, though, that he gave this speech because he had found his voice on race. He had it long ago, and his speech touched on themes on which he'd written even before coming to the White House.

To my mind, two factors contributed to its composition and delivery so late in his presidency. First, and perhaps most obviously, his first term was altogether swamped with other pressing matters — two unpopular wars abroad, an economy in free fall and a push for health care reform. Obama already had plenty on his plate. Second, the Charleston massacre came on the heels of other racially charged episodes of violence, many of which involved the police, over the past year. In this sense, the Charleston speech was about much more than the events in Charleston. It was about a historical legacy of racism that continues to rile our nation.

It is true that Obama has not pushed for many policies or programs that explicitly target the black community. His is not the liberalism of yore, which did so much to champion race-based policies. But Obama has begun the speak more frankly about the specific challenges that African-Americans face. In this regard, the Charleston speech was really important.

Lincoln's public reflections on the evils of slavery continue to inspire. It was a big deal when Teddy Roosevelt invited a black man — Booker T. Washington — to the White House for the first time. For who he is and what he represents, Obama is uniquely situated to speak both to the lasting and corrosive effects of discrimination and to the familial troubles and social pathologies that persist in many poor communities of color.