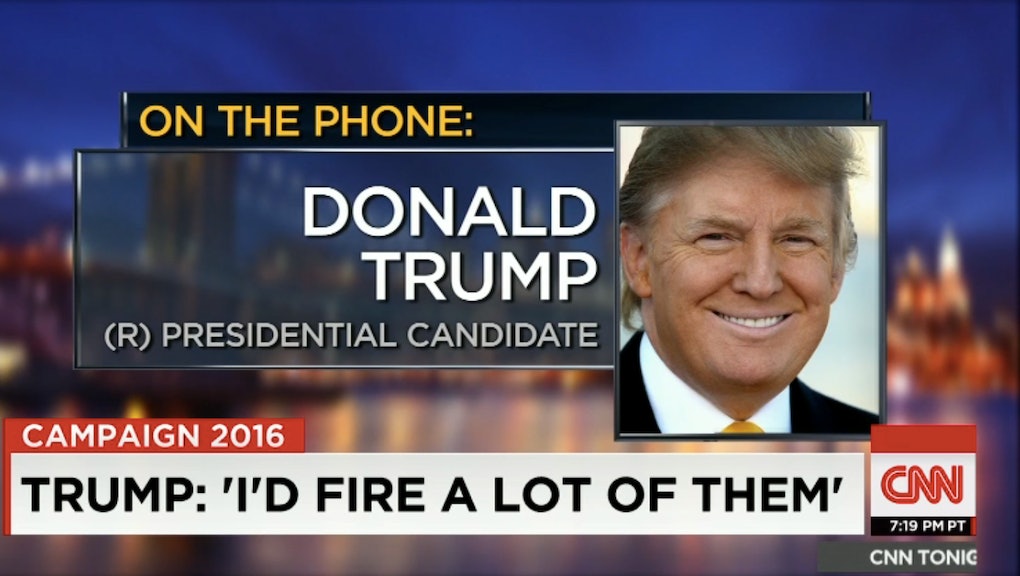 Donald Trump Just Tripled Down on Mexican Racism, Asking, "Who's Doing the Raping?"

Republican presidential candidate Donald Trump spoke to CNN's Don Lemon on Wednesday in a 15-minute on-air phone call in which the billionaire real estate mogul refused to back down from comments he made during his campaign announcement speech in June when he said of Mexicans, "They're bringing drugs. They're bringing crime. They're rapists. And some, I assume, are good people."

Trump cited as evidence a Fusion article he said illuminated the extent of America's rape problem. When Lemon pushed back, Trump offered the most Trump response to the matter yet by simply asking, "Who's doing the raping?"

In the interview, Trump also attacked the clothing retailer Macy's, which recently dropped his clothing brand, saying he was glad to get out of that business as he was never comfortable with his merchandise being made in China. He also again called the company weak, telling Lemon they "folded like dogs."

Trump also hit upon another signature issue, trade with China, and told Lemon jobs were lost to the country because it engages in unfair currency manipulation and again decried the amount of U.S. debt both China and Japan currently hold.

Taking a turn toward his television career, when Lemon asked Donald which GOP presidential candidate he would fire on the Apprentice, Trump said while there were several, he would stay mum, adding that "I want to be a nice person, I've striven all my life to be nice."

Trump, who is now polling second nationally and in key early voting states among Republicans, sounded far more serious than during his rambling — largely ad-libbed — campaign announcement in June at Trump Tower.

As the debates approach and people eventually begin to move past Trump's campaign announcement, he will eventually have to flesh out more concrete policy positions. How Trump would fight the Islamic State group or his long-term plan for the Affordable Care Act, which he has said will destroy the country, are a few of the issues Trump will need to lend more than soundbites to in the coming weeks.