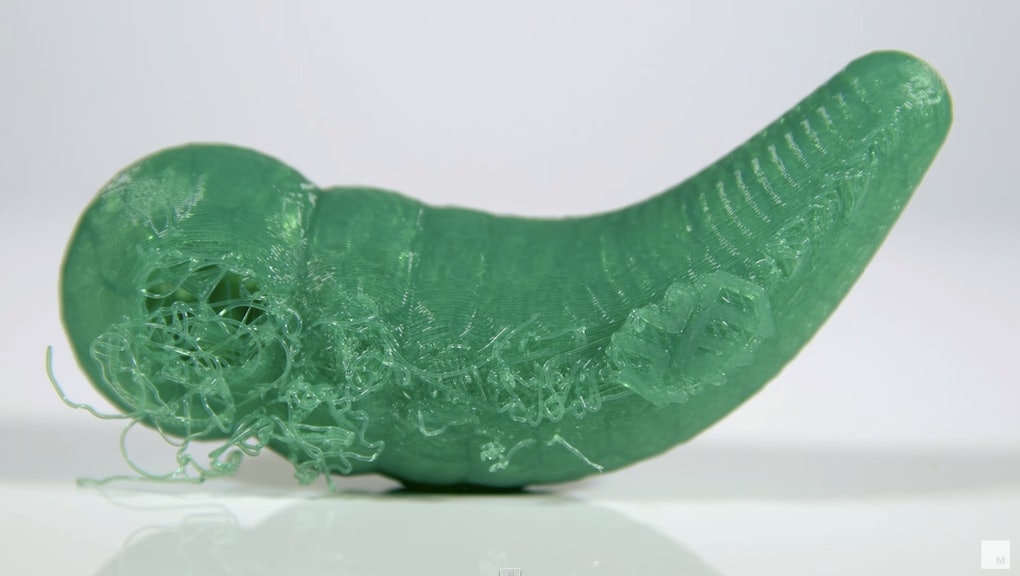 The same technology astronauts are using to fix problems in space can now be used to spice up your sex life.

In 1983, Star Wars: Episode VI — Return of the Jedi smashed the box office and Chuck Hull created a tiny plastic cup on the first-ever 3-D printer. Last year, that same technology was sent to the International Space Station, where it's being used to fabricate functional tools like ratchet wrenches for astronauts to repair things around the station. And now, on the cutting edge of technology, it has a new and inevitable use: sex.

Here are some of the best ways we're using, and will use, 3-D printing for pleasure — for better or worse.

Astronauts can print a new ratchet if it malfunctions, but a malfunctioning condom could have some serious consequences. Which is why the Bill and Melinda Gates Foundation offered a grant to anyone who could develop the Next Generation Condom. One of those grant winners, a team of researchers from the University of Wollongong in Australia, began working with hydrogels, materials that are essentially just water kept together with a chain of polymers. Because they're so soft, hydrogels can be designed to feel like skin but maintain the toughness of rubber, and can be stretched to over 1,000 times their initial size, according to the project's website.

But the really cool part is that hydrogels can be 3-D printed, making an advanced material much cheaper. Currently, research is underway to figure out how to best print the hydrogel condoms, which means we're incredibly close to having affordable, astoundingly durable condoms that not only promote safe sex and can be used by anyone allergic to latex, but also feel realistic and really, really good.

What might be one of the most promising and consumer-level lucrative advancements in 3-D printing is the ability to print sex toys with our own bodies in mind. There are sites, like MakerLove and SexShop3D, that allow you to either buy the plans for a sex toy or upload your own plans for others. And because the plans are all 3-D printer files, rather than the completed product, they are either free or extremely cheap. People have uploaded everything from simple dildos and beads to, well, a bright pink penis accompanied by what you might aptly call a Wicked Witch of the West hand.

If you haven't heard this yet, read carefully: Regardless of its intended destination, do not use a fresh-off-the-printer sex toy. Most 3-D printers print layer by layer instead of as one big, cohesive piece. Because of this, sex toys and most everything else you print needs to be smoothed out and sanded down to create a desirable, smooth exterior.

But that's not the biggest, or the least-visible, problem: Until researchers figure out how to print a combination of hydrogels and regular 3-D printing compounds, there will be microscopic gaps between the layers of any printed object. Those gaps are almost impossible to clean and can easily house any number of bacteria. According to Mashable, those breeding grounds can lead to bacterial vaginosis, bladder infection or sexually transmitted infections like chlamydia, syphilis and herpes.

If you spray the new toy down with several layers of a silicone lubricant, you can fill in those gaps. It's a good thing, too, because an STI would put a real damper on your new wave of the future.

There's been a fair amount of attention on printing small-scale human organs, like bioprinted ears made with "living" ink or metal finger bones. As further research occurs in biological 3-D printing, the ability to print larger, complicated organs becomes more accessible. Some labs are even looking into how that can be applied to reproduction.

There's a rare genetic disorder that can occur in women called Mayer-Rokitansky-Küster-Hauser Syndrome, which causes the vagina and uterus to be either underdeveloped or totally absent. Using 3-D printing, a team from the Wake Forest Institute for Regenerative Medicine tested a procedure to surgically implant the replacement organs.

"This is not like a defective organ that you augment or something you put in between two places," Dr. Anthony Atala, director of the Wake Forest Institute for Regenerative Medicine, said, according to CNN. "We had to create the organ."

The procedure's accompanying paper says that basically, the doctors printed 3-D "scaffolding" to create the basic shape of the organs outside the body, then added muscle cells from the patient to slowly grow a new organ around the printed structure. After it was grown, the organ was implanted, and the body recognized and accepted the familiar tissue without rejecting the foreign material.

It's ambitious and definitely not standard practice, but the procedure shows how 3-D printing has advanced with science, giving patients with a rare condition some hope for treatment.

Despite how simple a typical intrauterine device is, acquiring one can be ridiculously expensive. A Berlin-based designer named Ronen Kadushin developed the Bearina, named for its bear head shape, to show how easy it would be to create a free, open-source IUD for anyone who can't afford the often three-digit price tag attached to the widely used form of birth control.

Kadushin is careful to make sure anyone who comes across Bearina understands they shouldn't use it for contraception. Bearina is a statement; a means of starting a conversation. "As an Open Design, the Bearina IUD promotes collaboration and free sharing of knowledge," Kadushin writes on his website. "Further developed by a networked community or in partnership with a forward looking pharma company, [i]t is always available for experimenting with and improving, and could evolve into a functional IUD."

With Kadushin demonstrating how simple the design is, and given the number of people who can't afford birth control, it may not be long before a working, safe 3-D printed IUD is brought to the market.

In the name of upcycling, FOSSCAD, a open-source design community, recently uploaded The Songbird, a 3-D printed hand gun by a designer named James Patrick. Instead of using traditional pistol ballistics, it uses three condoms to push the gun's hammer forward, hitting the base of the bullet. It is, effectively, a working hand gun, probably the gold medalist of the controversial 3-D printed deadly weapon genre.

Unlike the other entries on this list — which mostly aim to create a safer sexual environment, develop openness to sexual expression or provide affordable contraception — this 3-D printing innovation could soon singlehandedly prevent you from having sex at all. This is the "worse" part. Sorry.

7. Public printers for everyone

Most of this technology, if you're going to make it on your own, requires access to a 3-D printer. And while consumer models roll out all the time, they aren't cheap. Fortunately, some companies offer printer use to the public. The UPS Store is one of them, and as the Daily Dot pointed out, there's no rule against asking them to print sex devices.

There are some guidelines. You can't print guns or gun parts. You have to have a working file. And, less officially, you probably can't go in and shout when they won't turn your drawing of a bazooka into a working anti-aircraft device.