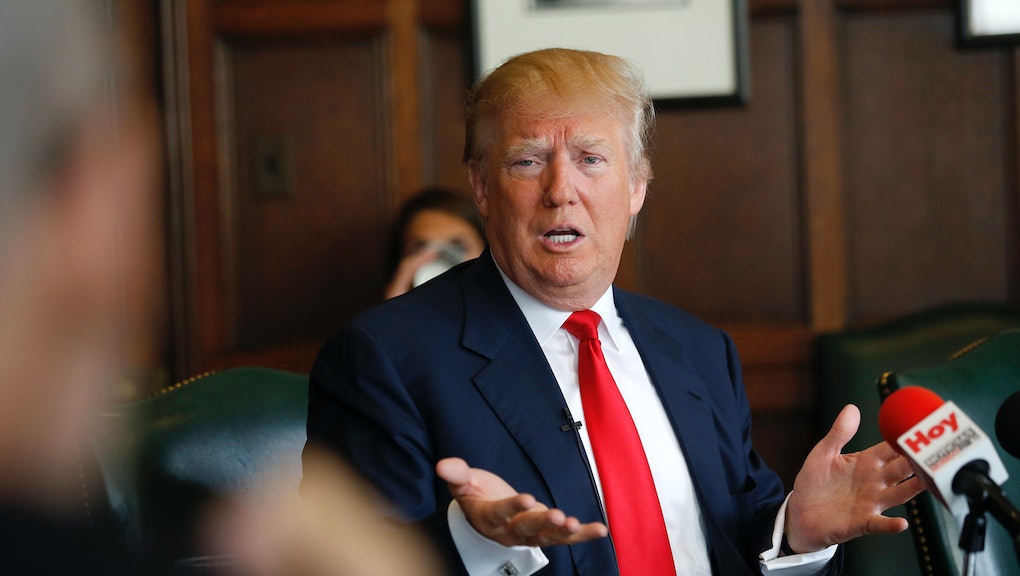 Donald Trump is as much of a problem for Republicans as a coughing fit is to a patient with advanced pulmonary tuberculosis.

For all his loud and disdainful rhetoric, Trump's rise in the polls is little more than a painful symptom of an increasingly dangerous rot in the Republican Party base. Even if primary voters are likely to suppress his voice in the early stages of 2016, there is no apparent plan or desire within the GOP to address the underlying illness.

In today's GOP, Trump is not an outlier or kook. He is a carnival barker for sure, but the message behind his brash words is pretty much in line with what Republican candidates said during last year's midterm election season. The main difference? Now, because it's a presidential cycle, more people are actually listening.

Same old song: Naturally, Democrats are loving every second of it. Days after Trump entered the race, Hillary Clinton scored a political point that had the added virtue of being true.

"You don't talk like that on the kind of political campaigns," Clinton told Nevada journalist Jon Ralston. "But I think he is emblematic, so I want people to understand it's not about him, it's about everybody."

Throughout his career as a real estate developer, casino magnate and, eventually, reality TV host and tabloid news headline generator, Trump has been a magnet for the lowest common denominator of the American public. In his short time as a candidate in the Republican nominating contest, he has made similar appeals, targeting immigrants when he isn't pumping up fears over the Islamic State group.

It's a familiar play. And for more than few Republicans last year, a winning one.

Sens. Tom Cotton (R-Ark.) and John McCain (R-Ariz.), former Texas Gov. Rick Perry, now a presidential candidate himself, and Rep. Duncan Hunter (R-Calif.), all hinted at one point or another that the Obama administration's immigration policy could help pave the way for IS fighters to enter the country from Mexico.

"At least 10 ISIS fighters have been caught coming across the Mexican border in Texas," Hunter told Fox News in October. The claim was eye-rollingly dismissed by Department of Homeland Security chief Jeh Johnson, but the whisper campaign continued. At a town hall meeting in Arkansas, Cotton said "groups like the Islamic State collaborate with drug cartels in Mexico who have clearly shown they're willing to expand outside the drug trade into human trafficking and potentially even terrorism."

Hunter won re-election to his House seat with more than 71% of the vote and Cotton, a senator for fewer than six months, has already made headlines for publishing a concern-trolling letter to Iranian leaders in an effort to scuttle their delicate nuclear negotiations with the White House.

Both Hunter and Cotton were appealing to deeply conservative constituencies, and Trump is doing the same. But the GOP's hardline minority has an outsize influence on the primary race. That Trump is running so well in these early polls is a logical extension of their power.

Not going away: NBC and a number of corporate retailers have seized on his comments about "Mexicans" as an out from unseemly business partnerships and his doubling down Wednesday night on CNN — "Somebody's doing the raping?" he argued to a befuddled Don Lemon — points to a more blinkered worldview than even his harshest critics might have suggested.

Yet Trump seems primed to impose his will on the Republican debate. Literally.

With the Republican field is so spectacularly swollen — there are now 14 formally declared participants with two more expected to join the fray by the end of July — Fox News decided to invite only the top 10 polling candidates to its first debate in Cleveland on Aug. 6. Trump is a lock to make the stage, steal headlines and bull more cautious opponents like former Florida Gov. Jeb Bush into uncomfortable positions.

Commentators will blame Trump for giving the party a bad name and surrogates for actual national contenders like Bush and Florida Sen. Marco Rubio will launch a media blitz seeking to dismiss Trump as a joker and aberration. They'll only be half-right.

Trump is a Frankenstein monster of this Republican Party's own creation — from the base who cheers him to the establishment that once looked on happily when his brand of rhetoric was winning them seats in Congress and statehouses, the Trump surge belongs to them.