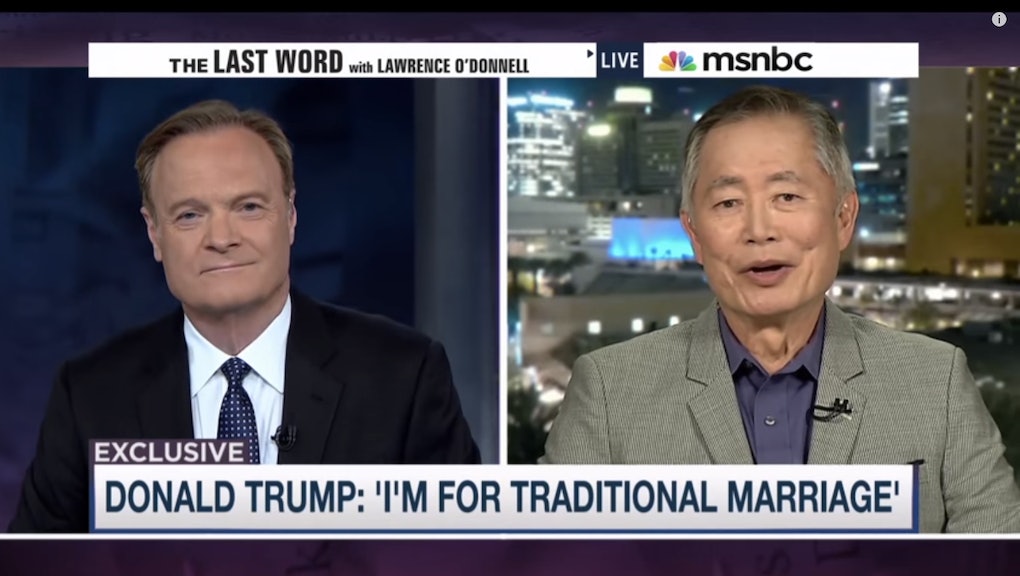 "He was for traditional marriage despite the fact that he's been married three times," Takei said. "That is not traditional."

As another New York City icon, Takei knew Trump before his presidential announcement as a contestant on Celebrity Apprentice. Takei spoke of once trying to convince the real estate magnate to change his ways, but ultimately, even the power of Mr. Sulu could not move Trump and the two agreed to disagree.

As Takei continued, he did point out an obvious problem with Trump's position on traditional marriage that will likely follow him as the election heats up.

Takei said he accepted Trump's ways because he felt it was important that Trump be allowed to find love. Takei has been with his husband Brad for 27 years, eight of which have been as official husband and husband.

Looking forward, Takei predicted the issue was destined to fade away much like his own interracial marriage, which would have once caused controversy, barely even registered today.

Trump's positions may be appealing to the ultra far-right Republican voters, but as the election draws closer, these views are increasingly at odds with ever more critical blocs of the electorate. Today, solid majorities of Americans support same-sex marriage, with Takei himself citing particularly high favorability among millennials.

Trump has also found himself in controversy with the latino community after he referred to Mexicans in the United States as criminals, drug-users and rapists in his campaign launch in June in New York. The statement led to many of Trump's corporate affiliates, including Univision, NBC and Macy's, to sever their associations.

Nevertheless, with Trump now polling second among Republicans nationally and in key early voting states, the rhetoric on all fronts is only likely to increase.