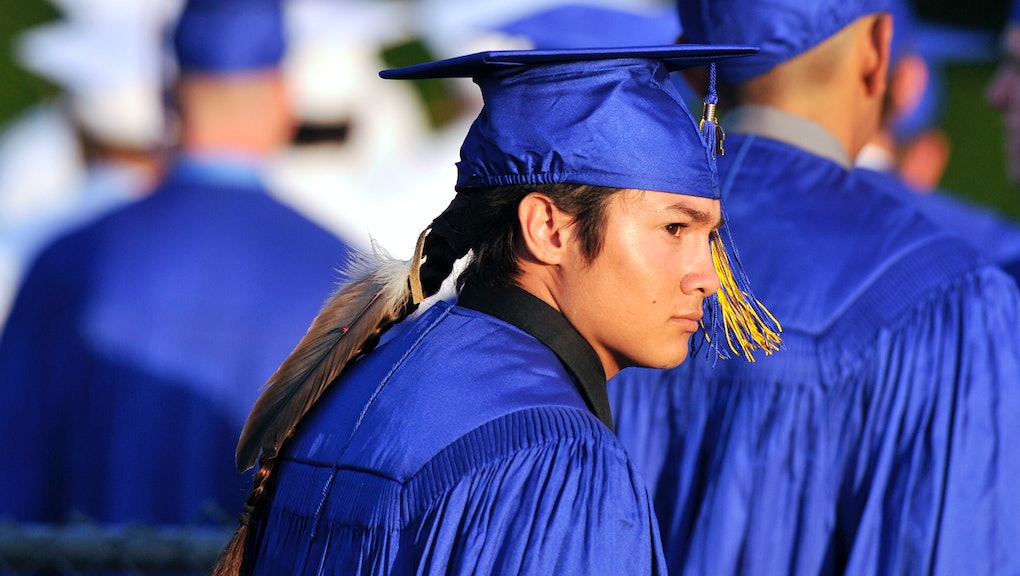 The Most Powerful Graduation Moments of 2015

The seconds it takes to cross a graduation stage can be primetime for the politically minded student. A captive audience of family, friends, supporters and, with any luck, haters, is the ideal platform for airing one's views without the requisite threat of punishment (you're not a student anymore — what can they do?).

This year, across the United States, high school and college graduates and their families have repurposed this stage to make a range of memorable statements — political, controversial, both or otherwise.

Here are five of the most poignant, powerful and galvanizing of Grad Season 2015:

Titman had to go to court before making his statement.

The 18-year-old Pit River Tribe member called on the American Civil Liberties Union to represent him. His case, which gained national coverage, set out to determine whether the Clovis Unified School District had violated his rights to freedom of expression by refusing to let him wear an eagle feather — a "sacred" symbol of transition gifted to Titman by his father, the Los Angeles Times reports — in his graduation cap.

It's not the first time such a dispute has arisen. High schools in Lakewood, Washington; Seminole County, Oklahoma; Ramona, Oklahoma and more have faced backlash for categorizing traditional feathers worn by Native students as "dress code violations."

Titman ended up winning his case. On June 4, he walked in Clovis High's ceremony with the feather on full display, telling the Los Angeles Times: "I climbed that ladder so I could graduate. I want to wear this because I accomplished a great thing."

Esparza sparked the ire of conservatives and so-called "patriots" across the country when she walked her graduation stage draped in the flag of Mexico, the country of her birth.

Esparza, 22, is undocumented in the U.S., according to the San Diego Union-Tribune. She moved to California when she was 2 years old, and though her academic experience has been sprinkled with uncharacteristic good fortune — including access to scholarships and significant institutional support from her schools — she still faced many of the challenges that confront undocumented young people: uncertainty around residential status, employment, the potential deportation of family members and the persistent anxiety that accompanies them.

Many found Esparza's display of hometown pride offensive to the United States (which you may know by its other name, the Greatest Country on Earth). She was characterized as ungrateful and disrespectful in the Union-Tribune's heated comment section. Many suggested that her presence at the university came at the expense of a more qualified, American-born student. Takedown pieces were written about her in newspapers. Her story received national coverage.

But in spite of it all, Esparza is doing just fine — she recently started a master's program at the university, which she plans to parlay into a career in education. She also founded the university's Undocumented Student Services Center, geared toward helping more students like her and ensuring the impending Mexicopocalypse.

Easily the highest-profile story on the list: the 22-year-old Columbia graduate extended her demonstration against the continued enrollment of the man she accused of raping her by carrying the mattress on which she was allegedly assaulted — a symbolic protest she turned into her senior thesis art piece — across the stage at graduation.

Sulkowicz's case was the centerpiece of a New York magazine profile in September 2014. It has since become emblematic of the widely criticized ways college campuses fail to protect women students from sexual violence, and how they process allegations.

The Washington Post reports that 1 in 5 women in college are sexually assaulted, a staggering number some say violates Title IX of the 1972 Education Amendment, which prohibits gender discrimination in schools. But Sulkowicz has faced particular public backlash for her activism: On the day she graduated, fliers appeared around Columbia's campus calling her a "Pretty Little Liar," while a Twitter account called @FakeRape was set up to share images of the posters and otherwise attempt to discredit her.

The price of demonstration is often high. Sulkowicz persists nonetheless.

In the early hours of May 16, Aaron Dunigan — a star high school football player and beloved son — was killed in a car accident on his way home from his senior prom, NBC Chicago reports. He was 18 years old, and slated to graduate four days later.

Days later, his mother, Katherine Jackson, walked across the Thornton Fractional North High School graduation stage in his stead — something she says she was unable to do at her own high school's ceremony.

"[My son] knows his mom never walked the stage," she said, according to the report. "I'm going to be his legs and he's going to be my wings and we're going to go up there and get our diploma.

"All of  this was divinely orchestrated by [Aaron]."

A moving tribute to a boy killed long before his time.

In a heartwarming moment, the 18-year-old took time in her valedictorian speech to specially recognize her father, Jamal Abdullahi, who "works nights as a supervising custodian at her high school," the Huffington Post reports.

"My parents Jamal and Zubaida made their way to Rochester, New York, from Ethiopia in the '80s and '90s," Duresso said, according to local television station WNYW. "They had the audacity to imagine something better for me and my siblings."

The Huffington Post reports that Abdullahi grew up in civil war-era Ethiopia, and moved to the U.S. in 1983 knowing no English and paying his way by working odd jobs, like "washing dishes and changing sheets at hotels." He eventually worked his way up as a custodian at the school.

But he always valued education, according to the reports. And now — to bring things full circle — his daughter plans to attend Barnard College, then medical school, before eventually opening a clinic in (guess where?) Ethiopia.