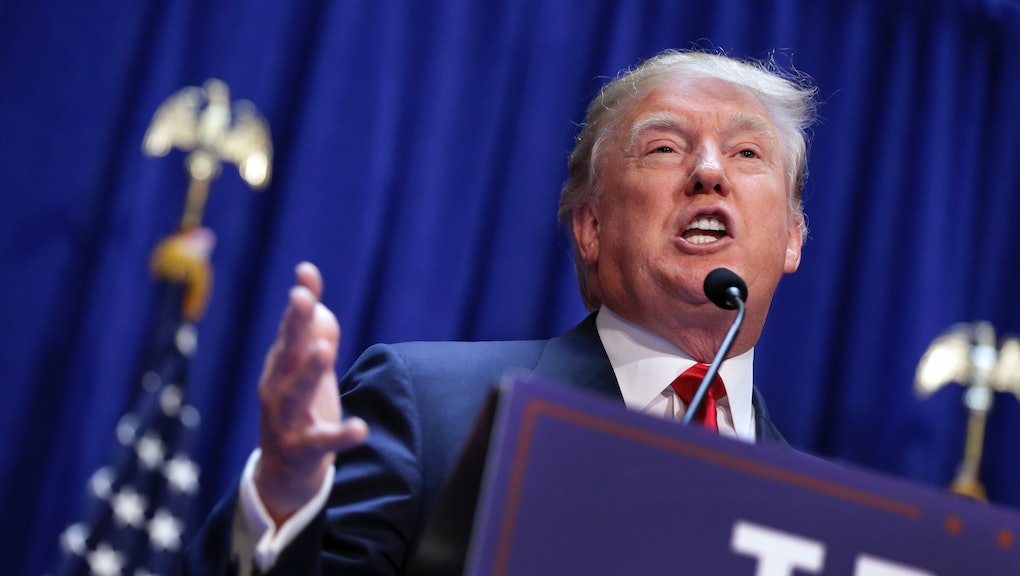 When Donald Trump launched his presidential campaign on June 16, he made one very big mistake. He went off script, insulting Mexican immigrants, and has since been paying a heavy price.

The backlash that ensued was varied: Several companies dropped Trump, ending their business relationships with him entirely, celebrities censured him and the Twitterati went wild. Trump takedowns abound, but the very best deserve to be recognized. So here are a few of the best responses from the past week. Some are powerful, some are funny, some are original. Different though they may be, they all require a round of applause.

The young Latina actress published an open letter to Donald Trump in the Huffington Post on Thursday, thanking the presidential candidate for his racist remarks.

"You see, what you just did with your straight talk was send more Latino voters to the polls than several registration rallies combined! Thank you for that," Ferrera wrote. "Remarks like yours will serve brilliantly to energize Latino voters and increase turnout on Election Day against you and any other candidate who runs on a platform of hateful rhetoric."

Rather than lambasting the bigoted businessman, Ferrera took the high road and thanked him for how galvanizing his remarks were.

"He was for traditional marriage despite the fact that he's been married three times," Takei told O'Donnell. "That is not traditional." The actor speaks of commitment from experience, having been with his husband for 27 years.

Takei noted how outdated Trump's views on same-sex marriage are. "In another 50 years, it's going to be as common as interracial marriage, producing presidents of the United States." Takei took down Trump's bigotry in a thoughtful and eloquent way, making his point all the more powerful.

"His statement was totally out of line ... working with someone so closed-minded was not going to work," Arturo Elias, Slim's spokesman and son-in-law, said, according to Reuters. Slim's decision to drop the bigoted presidential candidate makes this one more in a growing number of business ventures with Trump that are being cancelled.

After Trump's campaign announcement and his concomitant rambling, Stewart literally thanked the candidate for all the joke fodder. "Thank you, Donald Trump, for making my last six weeks my best six weeks," Stewart said. "He is putting me in some kind of comedy hospice."

The Daily Show proceeded to play nonsensical and highly offensive clips of Trump's speech, including the famed proclamation that Mexicans are drug dealers and rapists. "It's amazing! America's id is running for president. Trump is the part of your brain at 3 a.m. that's like, 'Let's go take a shit in a mailbox. Come on, who's gonna know?'" Stewart said.

In a similar vein to Ferrera, Stewart opted to thank Trump, rather than chastise him, for his absurdity.

Mexico's response was probably the most festive of all. Donald Trump piñatas swiftly became popular after his bigoted comments against Mexicans. Artist Dalton Javier Avalos Ramirez designed them and they've been in high demand at his store, Piñateria Ramirez.

"A lot of Mexicans are angry at this person," Avalos Ramirez told BuzzFeed News. "We've made piñatas of controversial people in the past, and we thought it would be a good idea to make a piñata of Trump because a lot of people would like to hit him."

Nothing heals a wound quite like swinging a bat and eating some candy.

Republican and leader of the American Principles Project's Latino Partnership Alfonso Aguilar has been encouraging members of his political party to disown Trump's remarks, as many have been hesitant to address them.

"The time has come for the candidates to distance themselves from Trump and call his comments what they are: ludicrous, baseless and insulting," Aguilar told the Associated Press. "Sadly, it hurts the party with Hispanic voters. It's a level of idiocy I haven't seen in a long time."

Miami is an important city for any American mogul or property magnate and, unsurprisingly, Trump owns a resort there. But it would appear the city doesn't want anything to do with him anymore. Miami mayor Tomás Regalado said, in his city, Trump is to be regarded as persona non grata. On top of which, Regalado gave back $15,000 in campaign funds, which he received from the Trump.

This was followed by a Miami-Dade County Commission resolution, passed unanimously on Wednesday, that officially "condemns Donald Trump's recent racist and derogatory remarks about immigrants."