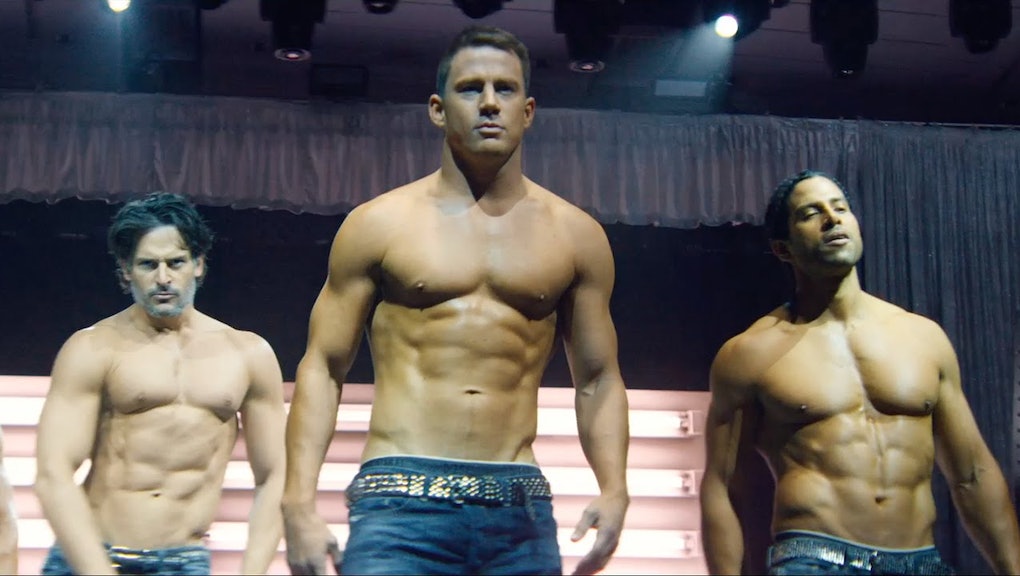 What 'Magic Mike XXL' Gets Right About Straight, White Masculinity

Magic Mike XXL plays like the club remix of the rock anthem that was Magic Mike, with the former's Springsteen-like riffs on a depression-era economy drowned out by thumping samples from back catalogs of lust and make-believe. In the first movie, working class guys hustle to make a buck by supporting themselves at a bar in Tampa. In the second, they create a fantasy, trying to come up with a winning act at a strippers' convention in Myrtle Beach.

But doing so involves more conflict that you might initially imagine. For as much as the strippers at the film's center make their way across the South with remarkably little conflict or purpose, the film contends with, and rewrites, many of the myths surrounding male attractiveness and desire.

XXL takes an axe to one of film's most brittle tropes — the male romantic hero — and reveals the ways that trope constricts the pleasure of men and women alike. In doing so, the film becomes just as much of a vehicle for straight male self-actualization as it is for straight female pleasure.

1. It understands that traditional models for masculinity are toxic.

Big Dick Richie never wanted to be a fireman, according to a running joke in Magic Mike XXL. Richie, played by Joe Manganiello, is afraid of fire. Yet he puts on (or, rather, takes off) a fireman's suit as part of his stripper act, because the act makes money. Why change what works?

Richie's anxiety might as well be the campy analog to the way many men feel when faced with conventional ideals of masculinity. Consider the number of TV shows built around the "Difficult Men" model: Mad Men, The Sopranos, Breaking Bad. They're all about men who contend with the expectation to be stoic heroes and provide for their families. Or consider campaigns against language such as "man up," which often invokes old-fashioned ideals but limits emotional growth.

XXL, a movie about men whose business it is to fulfill fantasies, is full of examples of how easy it is to act according to the expected model and still come up short. Mike's girlfriend turned down his marriage proposal, even though he had what he thought was necessary for an ordinary life: an apartment, a job, Downton Abbey on the DVR. The other strippers have their own dreams, from art to a froyo business. The common denominator: None of them dream to be the roles that they play onstage.

At the stripper convention later in the film, the team goes up against clubs that feature all the old stereotypes: cops and cowboys. One even re-enacts Twilight. Nobody keeps score during the competition, but it's pretty clear that Mike's team wins.

2. It allows various gazes to control the action.

The audience members at the club in the first Magic Mike are mostly young white women: cheering sorority girls, spring breakers and tiaras. The film treats them like a run-down college bar treats its customers, thankful for their patronage but wary of their enthusiasm. Matthew McConaughey's character, Dallas, promises that the men have all the control. "Who's got the cock?" Dallas tells the new guy, "You do, they don't."

In doing so, the film espouses a kind of masculinity, specifically white masculinity, that depends on acting on behalf of white women without violating their virginity. It's the kind of chivalry you might see in Gone with the Wind (or, more disturbingly, in Birth of a Nation), in which part of being a romantic hero means defending your woman. Even if she never asked you to help.

The first Magic Mike's stripper acts aren't the really the focus of the movie, but they reveal how the fantasies we take for granted are built around the most basic archetypes. "Never kiss the girls, man," Dallas says. "That's performer 101."

XXL rewrites that old lesson plan by including a few new voices on the syllabus. Dallas is gone, and so is the focus on a single kind of audience and the certainty of a "one swagger fits all" kind of performance. As the men make their way across the South, they entertain the kinds of audiences that Hollywood rarely pays lip service to: performing at a drag bar, in a club that caters to black women and at a plantation-style home for a group of older white women. In each space, the demands are different, and the strippers change their personae with them. Some girls may want a guy to save them, but others just want to talk — or to grab hold of him themselves.

3. It acknowledges that there's a lot left to be explored.

Despite all the attention it gives to women, Magic Mike XXL is really a fantasy for straight men. Much of the fiction around typical models of masculinity depends on there being only a few set ways to please a woman by following a few set models. XXL promises that it's possible to earn women's affirmation while also following your authentic desires.

During its finale, XXL has all its strippers perform their dream acts. One dances with candy, another paints and Richie finally gets to propose. Here, the performers almost seem happier than the audience members, who end up coated in whipped cream or hooked into a grim sling-like apparatus. In the midst of this chaos, the film becomes overeager, as if, after responding to just one batch of user input, it's certain it's built the perfect algorithm for exhibiting the male body.

'Magic Mike XXL' promises that it's possible to earn women's affirmation while also following to your authentic desires.

A cynical reading of Magic Mike XXL might argue that the film's innovation stops there, with the old masculine ideal replaced with a new, sleek update: Hunk 2.0, now with abs and emotions. But there's something earnest in XXL's commitment to bringing multiple versions of manhood into the picture, recognizing the way that desire depends on the fantasies of the object and the subject.

This vision of masculinity turns against history, tries constantly to make something new. To put it more simply, there's one moment in Magic Mike XXL where perhaps the men are happiest: After deciding they hate their old personae, the strippers throw all their gear out of the truck window and start reworking their act. "It's over. History," they agree.

The next step? "New stuff."