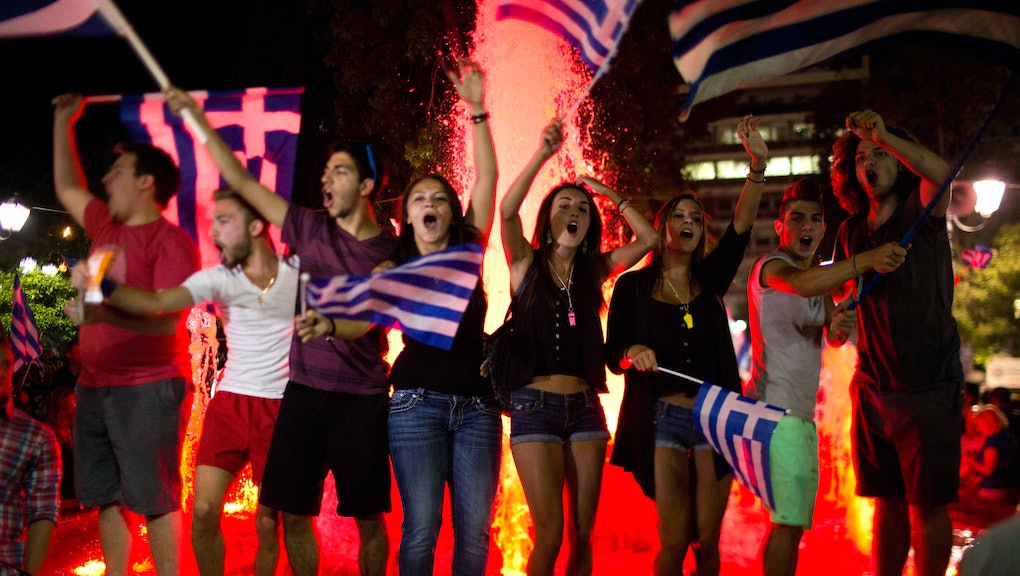 Greece went to the polls on Sunday to vote, with nearly a two-thirds majority, a resounding "no" on a referendum to decide whether or not the country would accept the terms of the European Union's bailout package amid the nation's deepening debt crisis.

What's more, almost all districts across Greece voted against the EU's proposed plan, meaning the feeling was pervasive and not restricted to certain pockets of the country.

Following the vote, Greek finance minster Yanis Varoufakis resigned in the hopes it would facilitate dialogue with the EU.

After the results, thousands of Greeks flocked to Athens' central Syntagma Square in front of parliament to celebrate their liberal victory against hegemonic pressure from the more conservative EU.

"I applaud the people of Greece for saying 'no' to more austerity for the poor, the children, the sick and the elderly," presidential candidate Bernie Sanders said in a statement on Sunday, according to the Pappas Post. "In a world of massive wealth and income inequality, Europe must support Greece's efforts to build an economy which creates more jobs and income, not more unemployment and suffering."

While many fear this referendum ultimately means the end of negotiations, the withdrawal of Greece from the eurozone and a return to its own currency, Prime Minister Alexis Tsipras did his best to reassure the country in a national televised address after the vote.

"The mandate you gave me is not the mandate of a rupture with Europe, but a mandate to strengthen our negotiating position to seek a viable solution," he said.

Despite the uncertainty, Greeks took the time to celebrate their immediate victory.

What does this mean? This referendum and Greece's refusal to capitulate to the European Union's austerity measures is completely unprecedented and therefore almost impossible to predict. In the worst case scenario, Greece withdraws from the eurozone and starts its own currency, followed by a withdrawal from the European Union. This could, in turn, cause financial panic, destabilize markets and possibly even lead to more countries abandoning the euro.

In response to the referendum, European and Asian markets took a dip and the value of the euro began to fall. Major European leaders on Monday demanded an emergency summit to discuss how best to proceed as markets are pre-emptively jumpy at the thought of a euro collapse.

America is far from insulated from this crisis. Given how interconnected the global economy is, the U.S. will invariably feel a sharp pinch if Greece descends further into chaos and brings the euro with it. This isn't a matter for Greece to sort out on its own — it's a matter for the whole world to resolve, as the outcome will affect everyone.