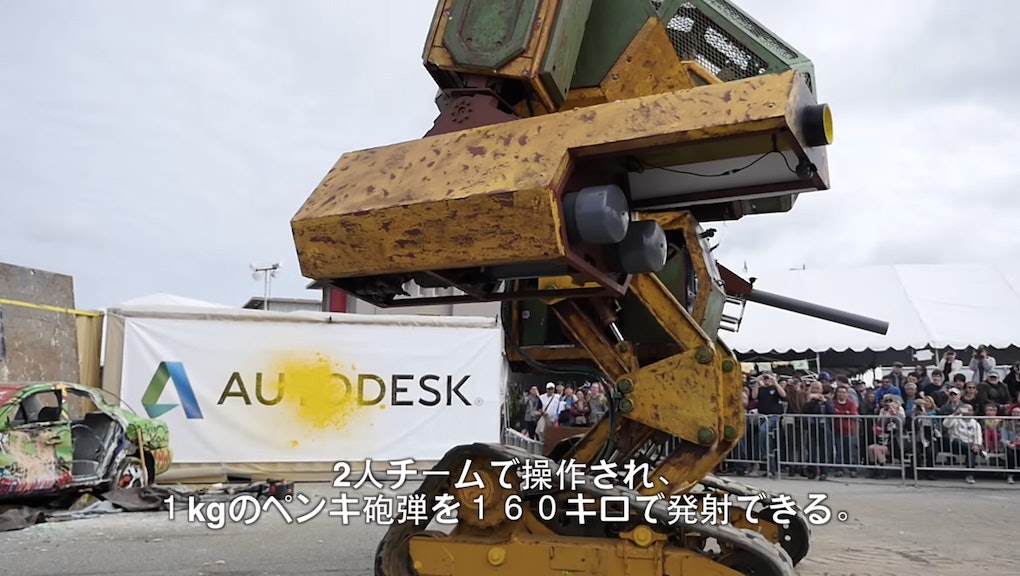 The United States dominated Japan over the weekend for the Women's World Cup title, but the next major competition between the two countries will be huge. Literally.

On Sunday, Kogoro Kurata, the Suidobashi founder and Kuratas' namesake, uploaded a video accepting the challenge, and burned America in the process.

While the Mark II looks like it can hold its own, stepping into the arena with a robotics lab from Japan, the cultural mecca of giant robots, is no joke. Kuratas is drum-tight when it comes to design and completion, since Kurata originally wanted to mass-produce the robots for $1.35 million. Kuratas is more nimble than Mark II, only being piloted by one person instead of the two needed for Mark II. And its operating and targeting system is advanced and terrifying: Its 6,000-round-per-minute BB gattling guns are triggered by the pilot smiling.

Despite the wicked firing power of Kuratas, Kurata is calling for the robots to be modified for hand-to-hand, not ballistic, combat. They don't screw around at Suidobashi.

As of right now, there's no set date or location. But the MegaBots team proposed to fight in one year, asking Suidobashi to pick the battleground.

This is probably the coolest robot-on-robot death match since the heyday of the TV show BattleBots. Only these robots are massive and operated by people, which likely means it won't be a real battle to the death.

Hopefully, the latest Japan vs. U.S. battle inspires robotics labs in other countries to start working on their own massive robotic gladiators. If that happens, the next big sport of the future could be global giant robot fights. Because if there's one thing the world needs, it's two gigantic death machines engaging in steel-on-steel combat for international bragging rights.