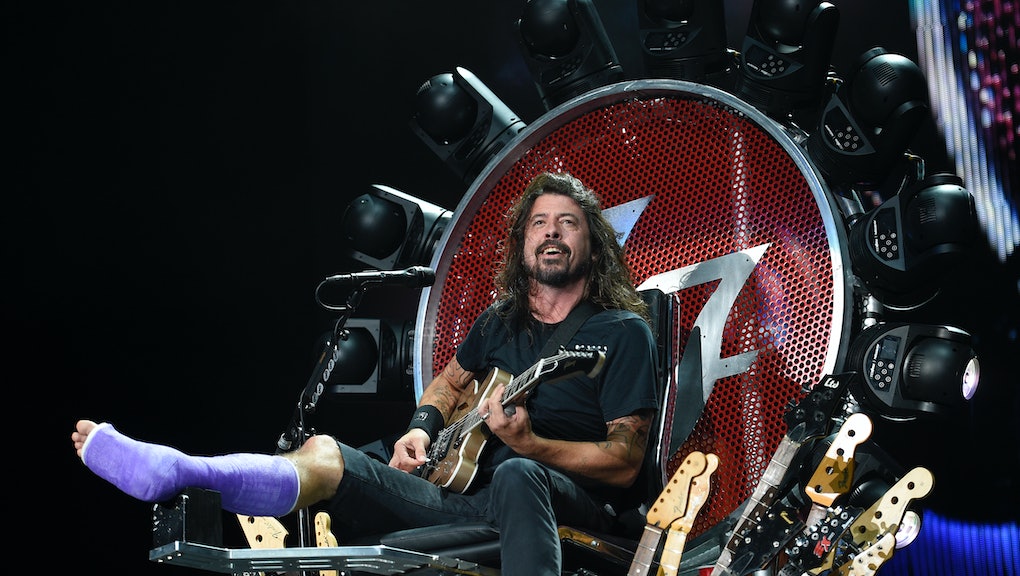 Less than a month ago, Dave Grohl broke his leg after falling off a stage in Sweden. He didn't let it stop him from performing then. And he's not letting it stop him now.

On the Fourth of July, Foo Fighters played a massive concert in Washington, D.C., celebrating the 20th anniversary of the band's debut album. Grohl performed the entire set seated on an epic rock throne he designed himself. From it, he rocked as hard as ever.

Covered in stage lights with guitar necks protruding from its sides, Grohl's performance getup was vaguely reminiscent of the Iron Throne from Game of Thrones. During the set, he shared the blueprints for the throne with the audience, complete with arrows pointing out the "lazers and shit shooting from the top."

"I was as high as a kite when I drew that picture," he laughed with the audience, telling them the full story about the fun times he had with oxycontin while getting his leg set at the hospital. But his road crew built it for him anyway. "Nothing is impossible in the Foo Fighters' world!" Grohl shouted to the audience, before launching into "Big Me."

Atop his throne, Grohl could still guitar and scream without any interference. Every song from the Foo Fighters' set — which included "Monkey Wrench," "The Pretender," as well as "For All the Cows" off their debut — sounded as epic as they always do. Few rock stars alive embody this diehard dedication Grohl exhibits every night. Here's to 20 more years of Foo Fighters domination.