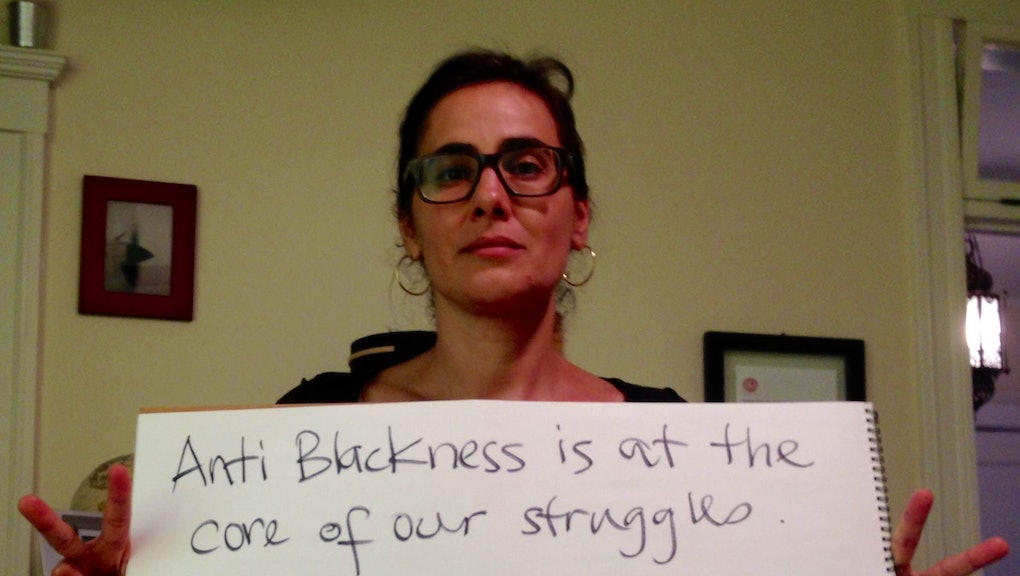 The People of Palestine Have a Message for #BlackLivesMatter Protesters in the U.S.

The connections between black people protesting state violence in the United States and Palestinians fighting occupation in Gaza and the West Bank have been well-documented.

In the subsequent months, this transnational solidarity has only grown stronger. Activist and scholar Angela Davis has spoken at length about its links, highlighting, for instance, how the multinational security company G4S has provided both material support for the Israeli occupation — a support they have vowed to scale down over the next three years — and for private prisons in the U.S., which profit from mass incarceration, a phenomenon that disproportionately impacts black and brown people.

"Both communities share many of the same grievances, suffer from the same systematic forms of violations, and therefore also campaign against some similar actors that profit from these abuses," Fadi Quran, an activist and educator in Palestine, told Mic. "[G4S] is just one example of many, and that's why solidarity and connecting our struggles is not only important, but necessary if we want to put an end to injustice."

It doesn't end there. Patrisse Marie Cullors-Brignac, a co-founder of Black Lives Matter, in February expressed solidarity with the people of Palestine in a letter addressed to the students of Stanford University, some of whom were voting for their school to divest from "corporations that profit from the Occupation" in February (the university declined to divest shortly thereafter).

"No studying could prepare me for the level of violence and trauma that exists inside Palestine," Cullors-Brignac wrote of a recent visit she took to Palestine. "The Black Lives Matter movement can benefit greatly by learning about struggles outside of the U.S., but particularly the Palestinian struggle."

To further illustrate the degree to which these movements are mutually intertwined, Mic has asked people from across the Palestinian diaspora — students, artists, educators, Americans, Europeans and people currently living in Palestine — to create a set of visual responses to the question:

"If you could say one thing to black American citizens about police brutality in the U.S., what would it be?"

The answers come from Palestinians from all over the world, of varying backgrounds and spanning a 45-year age range. But they all have one thing in common: They depict, unambiguously, how the civil rights struggle in Palestine and that of black Americans aren't as disconnected as one might presume.

Here's what they had to say:

"When I dare to be powerful, to use my strength in the service of my vision, then it becomes less important whether I am afraid." — Audre Lorde

"Standing in solidarity with all black people in the fight to abolish the different faces of oppression and build a world based on dignity, justice and love for all of humanity. Black lives matter. Lena Bahou, Edinburgh, Scotland."

"Murad Odeh, Palestine. As Imam Ali said: 'Don't find the path of truth desolated due to the paucity of its followers.' Your struggle against the killing machines is ours, until our freedom, hand by hand, joint struggle till liberation."

"Even during the pain ... the sunshine comes after the rain! #oneloveoneblood."

"It's not about one racist cop; the whole damn system is guilty as hell."

"Salute to all black Americans struggling for justice. I know how you feel, just as Palestinian poet Tawfiq Sayigh does: 'My feet are torn/And homelessness has worn me out/Park benches have left their marks on my ribs./Policemen followed me with their suspicious looks./I dragged myself from place to place, destitute except for day-long memories of a home that yesterday, only yesterday, was mine, and except for evening dreams of my dwelling there again.'"

"Anti-blackness is at the core of our struggles. In solidarity, Salma from Beit Ummar — Palestine."

"The Great Fear is that you will rise up, en masse, buoyed in the truth that you are an extraordinary people, of a powerful legacy, and an exquisite culture. #BlackLivesMatter."

"I, too, am the 'darker brother' in this world ... Tomorrow we will reach freedom. Together, we will create justice. And they'll see how beautiful we are. From: Palestine #BlackLivesMatter #OneStruggle."

"From Ferguson to Palestine."

Sa'ed Atshan, an educator and activist who helped Mic coordinate this project, had this to add:

"As African-Americans process the killing of nine precious lives during the recent Charleston shooting, the burning of their churches across the South and image after image of police brutality, many Palestinians in the U.S. and across the globe are bearing witness to this suffering. Although there is much to be done in addressing the long history of anti-Black racism in the U.S. and around the world, the legacies of Black-Palestinian reciprocal solidarity inspire hope. In this project, Palestinians from different walks of life send our messages of love and support to our Black sisters and brothers."