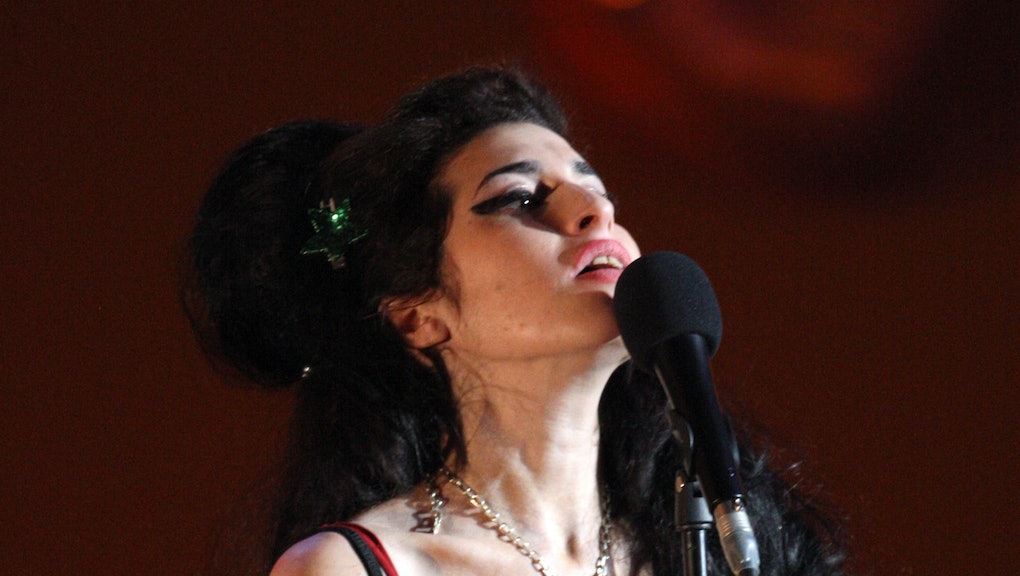 She, better than any other artist, could gracefully meld classic jazz instrumentation with devastatingly modern lyrics. Delicately crooned lines like "What kind of fuckery are we?" fit right alongside classical truths like "Love is a fate resigned" without the slightest friction. She had "a voice to kill, and a habit of fearless inquiry into the unsightly innards of human emotion," SF Weekly wrote after her death in 2011. She co-wrote every song on Back to Black, and her producer Mark Ronson told the Telegraph in January, "When she wrote, there was no editing. It came out like, this is the truth and this is how it's gonna stay." You'd never learn these facts watching Amy.

That's because beside the occasional shot of a lyric sheet or snippet of concert footage, Amy Winehouse the artist is largely absent. The film prefers to explore Amy Winehouse the tragic spectacle — the tabloid figure the media pursued throughout the last few years of her life.

A double standard that stretches beyond death. Winehouse is not the first female artist to have her artistic achievements overlooked in favor of a close read of her erratic behavior. In her look at Amy for Pitchfork, Molly Beauchemin offers an exhaustive list of female artists who have suffered the same postmortem treatment as Winehouse, including Janis Joplin, Billie Holiday and Whitney Houston.

Unfortunately, the documentary's angle fits an all too common trend in the highly gendered way that the media celebrates our artists and their legacies. Male artists can count on their artistic contributions receiving lengthy discussions following their deaths. Female artists, on the other hand, will struggle to have their art recognized through the scandal.

Beauchemin compares these with the legacies of Jimi Hendrix, Keith Moon and Michael Jackson. In the obituaries of each, their drug use is treated as an afterthought to discussions of their artistic achievements. Montage of Heck, a documentary about Kurt Cobain released in January, offers a perfect contrast to Amy. The film explores Cobain's drug use, but it dedicates more time to his development as an artist — his countless hours of practice, his idolization of punk rock heroes and his endless doodling, which offer insight into his anti-patriarchal and anti-establishment views.

Amy hits Winehouse's jazz influences like bullet points in the opening minutes of the film: Dinah Washington, Sarah Vaughan and Thelonious Monk. It revisits her artistic development briefly when Winehouse records her duet with Tony Bennett, another of her idols, who notably called her a "true jazz singer." The rest of the film is drugs, manipulative family members and paparazzi flashbulbs, which the New Yorker claims were digitally enhanced to make their glare more blinding.

The media has relished this narrative for years. "With men, there's an emphasis on, 'he had this issue, but he's getting over it,'" Rebecca Roy, a psychotherapist in Beverly Hills, California, told the New York Times in 2008. "But with women, it's like they keep at it, keep at it. It's almost like taking the wings off of a fly."

Amy is the ultimate demonstration of this inequality. After Winehouse's infamously disastrous final performance in Serbia, the film runs through clips of the ensuing media maelstrom. "She had the chance to make a big comeback and she totally blew it!" one newscaster exclaims. "Did you see Amy Winehouse in the papers last week? My God! She looks like a campaign poster for neglected horses!" says comedian Frankie Boyle.

The film relishes Winehouse's demise, and makes little effort to elevate her beyond the role of victim. We learn next to nothing about what made her such a unique talent, or any discussion of the way her music will be remembered in the future. In doing so, it contributes to numerous cliches that plague women in art: that women can't write their own music, or that they're only famous because powerful male figures lifted them into the spotlight.

"The more they see of me, the more they'll realize the only thing I'm good for is making tunes," Winehouse says in the film. "Just leave me alone." The film neither honors her wish nor turns its critical lens to her work.

But such is the reality of our treatment of female musical casualties, in which their artistic contributions are a mere footnote to the drama of their lives. In a way, it's heartening that Winehouse isn't around to suffer seeing her legacy sensationalized again.