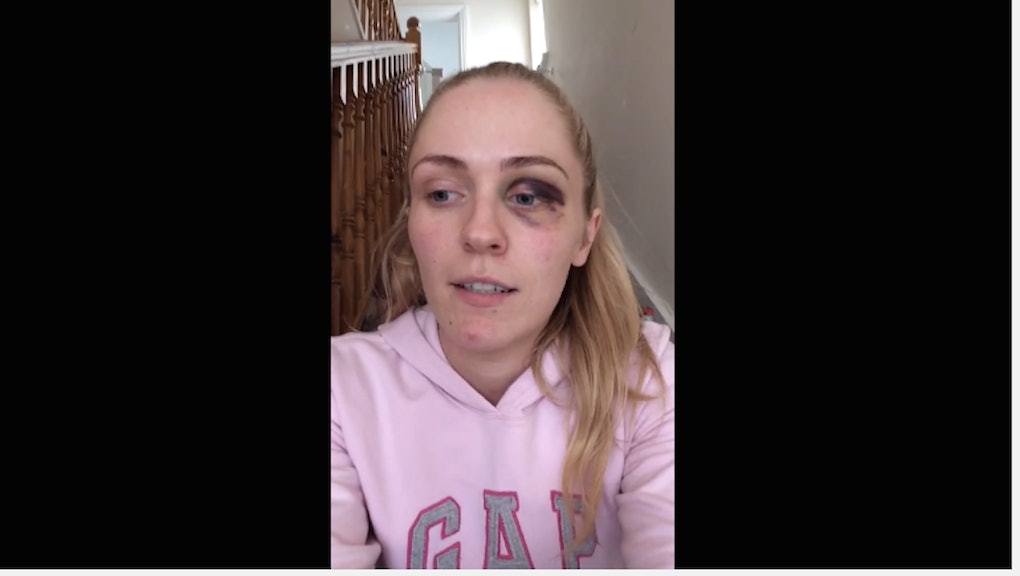 The latest viral Internet video is a stark reminder for all of us that domestic violence is a serious problem in many millennial relationships — and there are women readily speaking out.

Emma Murphy, a 26-year-old mother of two from Ireland, took to her Facebook and YouTube accounts on Monday to share a heartbreaking personal story about an abusive relationship that she recently walked away from.

"I'm a firm believer in standing up for what is right," she writes under the video. "If you or anyone you know can relate to my story, get in touch. ??"

Pain that's not just physical: "I've been in a relationship for three and a half years with a guy who I thought was the love of my life," Murphy tearfully starts, before sharing her story. Recently, she confronted her partner about his cheating habits — a confrontation that eventually turned physical.

"He punched me in the face, and it wasn't the first time," she says. "Last year, he split my head open ... at an event prior to that, he punched me as well and I had a black eye."

In addition to experiencing physical trauma, Murphy makes it clear that the abuse was also emotional: "I've been told that I'm paranoid, I'm a psycho, I'm nuts, my insecurities will kill me one day." That emotional manipulation, she says, was akin to "mental torture."

Finding voice on YouTube: Murphy's video is just the latest in a number of personal stories of domestic violence that have found an empowering platform on YouTube.

In a 2013 video, Jessenia Vice shared her experience in disturbing detail. "He's cursing, he's yelling and he's coming at me," she says of one incident with her abusive ex. "And then he pushed me. I remember being knocked down so hard to the ground that it took the air out of me." She says her ex "continued to kick me, spit at me, blow punches to me."

Heartbreaking stories like these have been told over and over and over again on YouTube. They serve as a stark reminder that despite hashtag campaigns like #WhyIStayed and #WhyILeft shedding light on the issue of domestic violence, many women continue to be physically assaulted by their partners.

It's a millennial problem too: According to a 2010 report from the Centers for Disease Control and Prevention, approximately 1 in 3 women will be victims of domestic violence at some point in their lives. Millennial women appear to be particularly vulnerable to intimate partner violence: According to the anti-domestic violence organization Safe Horizon, women between the ages of 18 and 34 are at the greatest risk of being physically assaulted by a partner.

As painful as videos like Murphy's are to watch, they are important in allowing victims to feel like speaking up is an option in a world where they're sometimes scrutinized more than their attackers.

Last year, for instance, beauty and fashion vlogger Sammi Maria opened up about her past experience in an abusive relationship. She said that in addition to the abuse she suffered in her relationship, when she finally summoned up the courage to publicly tell her story, she was accused of making it all up.

"I can't deal with being called a liar about that," she told her viewers. "When I've had to go through it."

The most important thing that these videos remind of us is that if domestic violence presents itself in a relationship, it is essential to find the strength to leave. It's not easy to make the decision to leave someone you love. But as the survivors in these videos are quick to note, it could actually save your life.

We see plenty of viral videos of happy relationships, but the ones that show the darker side of connecting are also worth watching — and sharing.