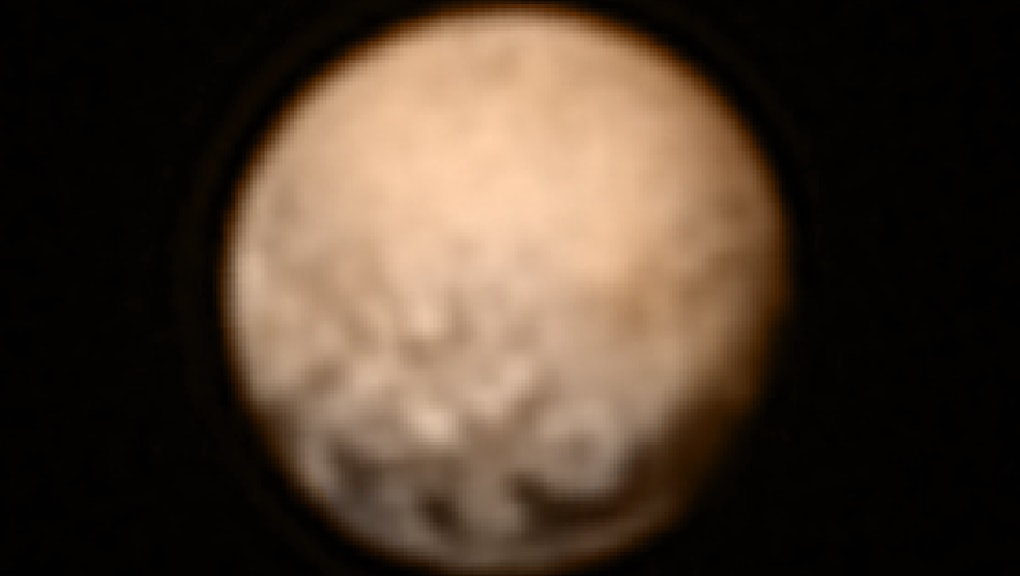 Turns Out We Were Completely Wrong About How Pluto Looks

What color is Pluto? If you search for the dwarf planet on Google, the overwhelming majority of images suggest that it's a sort of steely blue or gray color. But now, NASA's New Horizons spacecraft is closing in on it, and new, non-crappy images are revealing something completely different.

According to NASA, New Horizons' principal investigator, Alan Stern of the Southwest Research Institute, says scientists have known about Pluto's reddish hues for decades, but because images have never been taken from this close, they didn't know for sure. But thanks to the maps developed from New Horizons' data, recorded from roughly 7.8 million miles away between July 1 and July 3, researchers are now able to see the real detail of its coloring and texture.

As it turns out, the sneaky thing is red. Or, at least, reddish brown, similar to Mars. But while the coloring on Mars is from iron oxide, Pluto likely has a different agent. According to NASA, "[T]he reddish color is likely caused by hydrocarbon molecules that are formed when cosmic rays and solar ultraviolet light interact with methane in Pluto's atmosphere and on its surface."

New Horizons is scheduled to fly by Pluto on July 14, but the journey has already had a harrowing experience. Due to a computer overload, the ship's system partially shut down on July 4 — probably causing some anxiety near Mission Control because, after 9.5 years and 3 billion miles, this was the first time anything really went wrong, and it was 10 days before the trip would come to fruition.

In one week, New Horizons will be 7,750 miles from Pluto, the closest distance anything manmade has come to it. Once the photos and maps come back, we'll finally have real answers about the perplexing dwarf (or maybe not) planet way out on the edges of our solar system. It's just one small step on the path to understanding our known universe. And it starts by totally disrupting what you thought you knew about our tiniest neighbor — soon to be known as the "other" red planet.