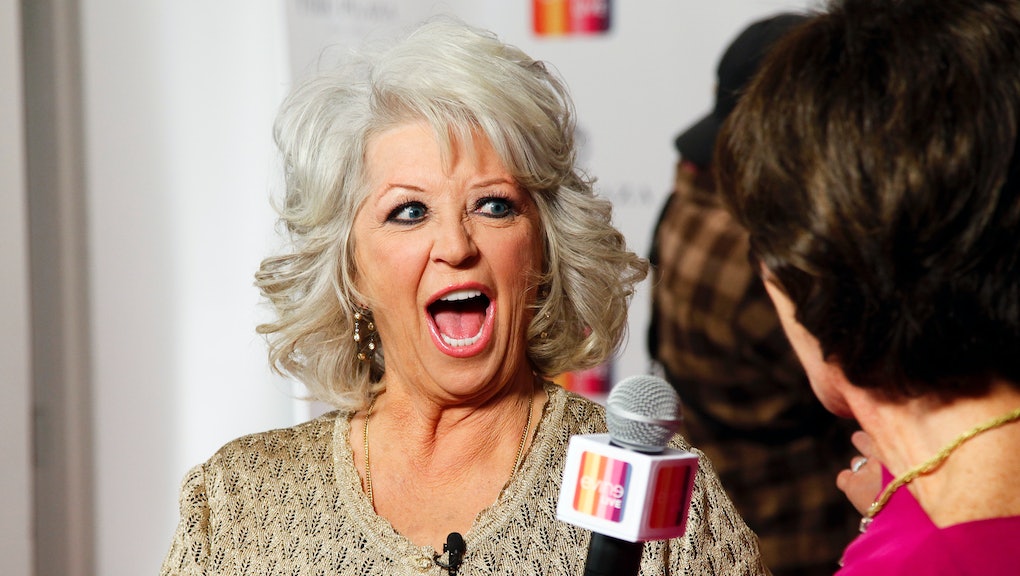 Paula Deen Tweets Photo of Her Son in Brown Face, Has Learned Absolutely Nothing

Paula Deen best get out the butter, y'all. She'll need some help slipping on out of another sticky situation.

The onetime Southern cooking queen-turned-nationally-shamed-casual-racist has managed to throw herself into boiling water with a tweet (since deleted) featuring a photo of her and her son Bobby dressed up as Lucy and Ricky Ricardo from I Love Lucy. This might be cute, were Bobby a man of Hispanic descent.

While generally egregious, the brownface is particularly terrible here because of Bobby's unpainted hands held up to his head. Quite clearly, his facial skin is a different shade than the rest of himself. This isn't just self-tanner gone wrong: It is racism, as plain as, well, the brown on his face.

On her Facebook page (where she also posted and later deleted the photo, because Deen can't make a mistake in just one place), she clarified the shoot was for an episode.

At first, it could be presumed it was for her new cable TV show. But according to Yahoo, the photo is actually from a 2011 episode of Paula's Best Dishes, her now-defunct Food Network show. This would seem to be true: There's even a 2011 photo of Bobby Deen getting made up in brownface on her Facebook page.

"We had so much fun on this episode, y'all," she told her Facebook fans when re-posting the brownface picture. "I just had to share this photo with you!" The question now, of course, is why Deen felt it necessary to share a photo of her son in brownface four years after the fact. Certainly there were more appropriate #TransformationTuesday options, Paula!

Deen clearly learned absolutely nothing from her previous time on the hot plate of controversy. Her 2013 admission that she uses the N-word, and once almost hired black waiters and waitresses to dress up like "slaves" for her brother Bubba's wedding, should have removed her from public view forever. It didn't take long after her return to TV, however, to bake herself into a biscuit of drama once again.

While her fans on Facebook may remain mostly supportive, that hasn't stopped Twitter from coming for her once again.

The posts may have been taken down, but Deen remains silent on social channels now. It remains to be seen if she'll respond — and if so, what her bizarre, teary apology will look like this time.