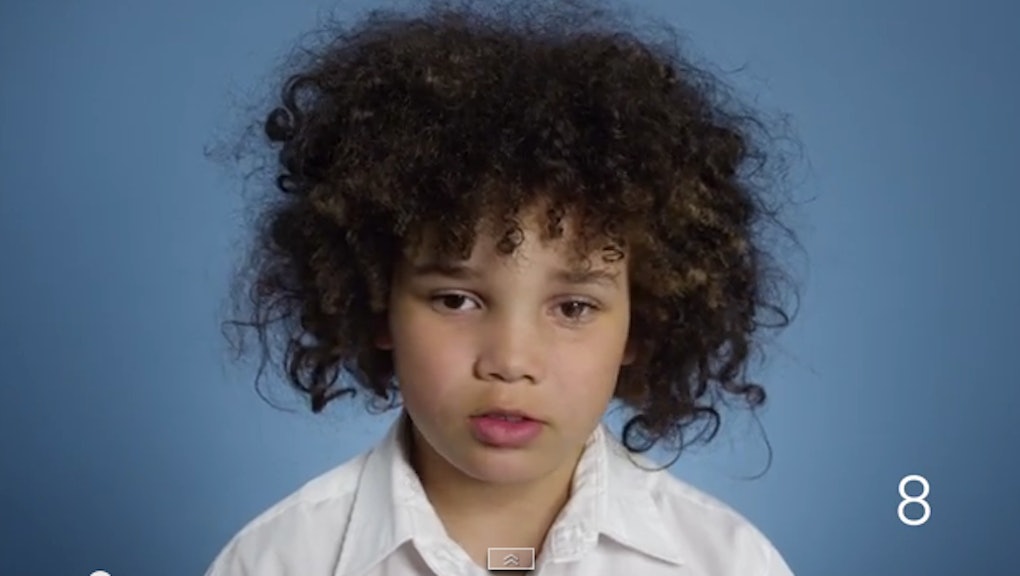 While they have undoubtedly enjoyed plenty of privilege throughout history, it's important to remember that men face undue societal pressure, too — especially when it comes to toxic masculinity standards.

But is the tide starting to change on that front? Cut Video decided to find out by filming boys and men between the ages of 5 and 50 responding to a phrase that has become somewhat emblematic of American manhood: "Be a man." So what does this directive mean to men in 2015?

Traditional understandings of masculinity are, unfortunately, alive and well. The youngest participants proved just how early cultural messaging about masculinity influences them — and how that understanding can be used to judge others and measure value.

But plenty of others rejected toxic standards of brute strength and denial of emotion.

The 21-year-old described the phrase as "misleading," adding, "I've learned that being a man doesn't mean to shut out your feelings, it's to embrace them."

"A lot of people feel that when you're telling someone to be something you're inherently wrong because people can be anything they want to be," the 23-year-old said.

"Classically, men have beat the shit out of women," the 29-year-old said. "That's what men have done. And so that's not the man I want to be."

Others still noted that this phrase was sexist, as it implies that "being a man" involving an ideal set of traits for which they should strive — and, conversely, insulting womanhood as something to avoid.

"I feel like it's kind of sexist," the 15-year-old said."When someone just says, 'Be a man' — well there are strong women as well."

"It's a very accepted form of sexism," the 42-year-old said.

Perhaps most encouraging of all: This message of equality has not only influenced younger generations, but was evident among older men, too. Although men in their 30s and 40s were arguably born in eras that more strictly enforced traditional gender stereotypes, the video participants in that age range recognized how toxic this phrase is. It's an encouraging indicator that feminist thought has not just reached, but really truly influenced many.

Being a man is "overrated," according to a 38-year-old.

"Who defines what a man is?" the 39-year-old asked. "I mean, we all have to walk our own paths. What I consider to make me a man may not be what makes you a man."

Studies back this video's anecdotal findings up: A report released in April by A Woman's Nation, for instance, found that modern masculinity is far more complex than it has been previously — that men value and prioritize their familial roles more than ever before. They're also embracing emotional intelligence more than ever.

But as encouraging as many of these answers are — and although they indicate a shifting landscape of American masculinity — some responses prove there's still a long way to go before the idea that masculinity is far more complex than this deceptively simple phrase could ever suggest.