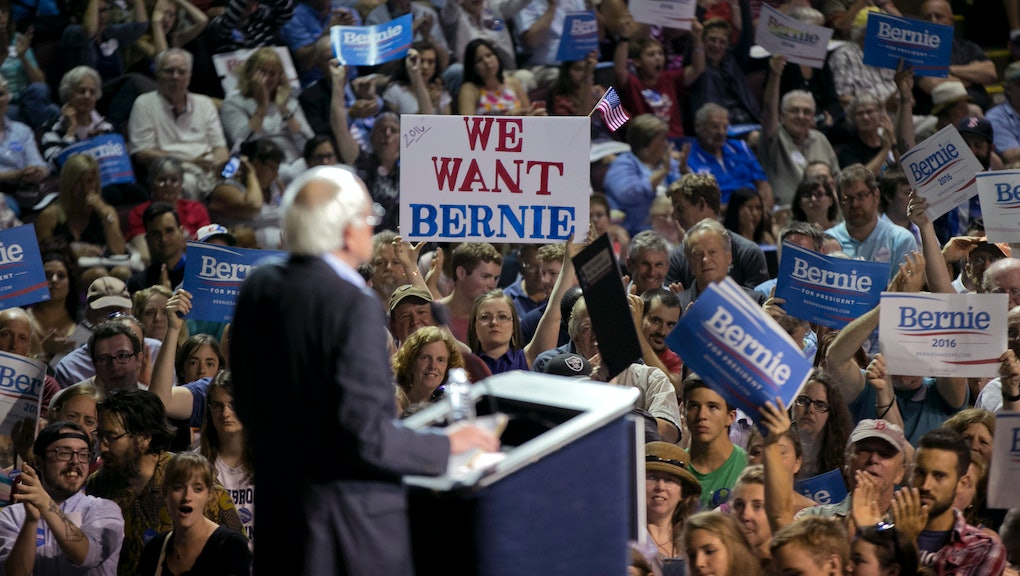 The most recent poll out of the key presidential swing state of Florida shows Sen. Bernie Sanders (I-Vt.) rapidly growing his base of support among Democratic voters while Hillary Clinton's numbers remain strong but stagnant.

Sanders was the pick for 21% of registered Democrats in a Gravis Marketing survey conducted in late June. Clinton retained a significant lead, scoring more than 63%. This is in line with her average performance in the state over the past year, with her poll numbers hovering around the 60% mark. Sanders, meanwhile, has seen a 20-point spike in his statewide backing since March.

According to the Huffington Post's Pollster app, which tracks and balances a series of polls, Sanders jumped from 1.5% in March to an average of 20% support in June:

Florida decided to hold its 2016 presidential primary on March 15, later than in past cycles, as legislators and Republican Gov. Rick Scott sought to avoid further clashes with the Democratic and Republican party officials. In 2008, Clinton's win in Florida was essentially negated because the state decided to hold its vote Jan. 29, a week ahead of the "Super Tuesday" contests. Ultimately, the Democratic National Committee cut its delegate count in half.

Despite voting later in the process this time around, Florida will represent a pivotal stop in a primary campaign shaping up to be more competitive than most Democrats expected. For Sanders, it represents a crucial test of his appeal to voters outside the mostly white, liberal electorates in Iowa and New Hampshire, where he has been consistently gaining on Clinton.

The strategy: Rather than plant resources on the ground there — the campaign has no staffers in Florida — Sanders is banking on national coverage of his massive rallies across the country to build excitement in places like the far flung Sunshine State.

"Our experience all over the country has been that the more people know about Bernie the better they like him," Sanders communications director Michael Briggs told Mic on Wednesday. "At this early point, I think what you're seeing is him touching a nerve" on issues ranging from raising the minimum wage to $15 an hour to tuition-free college.

The strategy is beginning to take root. Poll numbers are up and online communities, like the "Florida for Sanders" Reddit page, are actively recruiting volunteers and sharing information about small gatherings and organizing meetings. Sanders has raised about $15 million from a quarter-million donors since formally entering the race April 30. The average donation: $33.51.

Florida firewall? Clinton, meanwhile, has already traveled south on fundraising duty, hitting four events in three locations, from Miami up to Orlando, over two days in late May. Obama campaign alum Sandy Ducane is heading up Clinton's early efforts in Florida, as part of the candidate's plans to have active ground presence in all 50 states. The campaign said 91% of its $45 million first-quarter haul came from small contributions.

With its diverse voting base and expensive media markets, Florida will provide Sanders a unique challenge. In 2012, eventual Republican nominee Mitt Romney flexed his financial muscle there and effectively wiped out a slate of underfunded challengers. If Sanders is still in the mix come March 15, 2016, expect Clinton to go the same route.