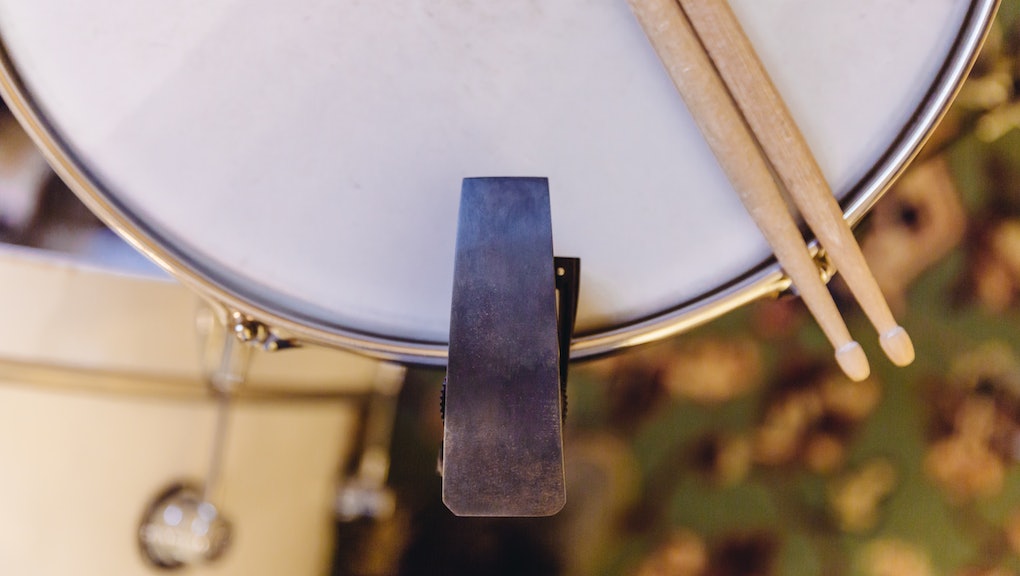 As music goes increasingly digital, live drummers are becoming an endangered species. So much of today's most experimental and cutting-edge beats come out of samplers and pads of hip-hop and EDM. Drummers who still want to get the feel and subtlety acoustic drums can provide have been at a loss for ways to mimic those sounds. However, we may be about to bridge that divide.

A new technology from new music tech company Sunhouse called Sensory Percussion introduced Wednesday on Kickstarter may prove to revolutionize electronic drums. Using new trigger and signal technology, the device allows drummers to manipulate the sounds of their existing drum set and rearrange them into any shape and texture they can imagine. This may be the technology that finally marries digital and acoustic drums into a single instrument and will hopefully bring flesh and blood drummers back into the limelight.

"The mission is to bring drumming into the 21st century," Tlaceal Esparza, founder of Sunhouse and drummer for ARMS, Friend Roulette, El Topo, the Dave Harrington Group and sometimes Nicolas Jaar, told Mic. In his eyes, the product is an effort to preserve drumming as a physical artform.

"I want to empower drummers to create more and fit the new music and start feeling like they have control again," he said. "I want to bring back the drummer's primacy in rhythm making." He notes that live drummers have largely become novelties in pop, hip-hop and EDM, replaying beats that were not composed or recorded on drum sets. He finds this reality disappointing.

"There's a real genius to the physicality of playing real drums and the kinds of musical phrasing," Esparza said. "And the ways in which you can think through rhythms is very unique and very powerful. The idea is to take that and make that work with digital sounds."

How it's different: Most traditional drum triggers function along a simple binary, on or off. You hit X drum, you get X sound. But acoustic drums do not function in these black and white terms. Striking the center of a snare sounds different from striking its edge, which sounds different from its rim. By analyzing a drum's various timbres, Sensory Percussion allows to assign digital sounds and effects to each of these different hits along a fluid continuum using a digital interface.

Drummers can use all the techniques they've trained for years on their own sets to bring forth an infinitude of new sounds to the table.

"I don't have to play a little fucking pad anymore! That's my biggest arch nemesis as a drummer," Kiran Gandhi, drummer on M.I.A.'s Matangi tour and artist behind the upcoming Madame Gandhi project, told Mic. "I don't know how drummers do so well with those things because you literally have to remember which sound you put in each square ... For me, to have that mapped onto drums I know and love and understand is a game-changer."

Gandhi says she uses Sensory Percussion to change her entire kit into a chorus of chopped-up vocal samples, making melodies as she rolls around the toms. "Some people will be averse to it and that's completely fine," she says. "But for a lot of people like myself who only have been schooled in drumming but have always wanted to have their own musical body of work, Sunhouse triggers are amazing. This gets me so excited because I feel like my drum skills can be melodic they can be musical, they can make songs not just a drum beat."

There will be skeptics. Traditionalists have long held that no electronics should come between a drummer and his set. "Guys are scared of an electronic drum kit for some reason," Nicholas Ley, drummer for the Flaming Lips Academy of Contemporary Music at the University of Central Oklahoma, told Mic. "But for me, it's a part of growing up listening to hip-hop just as much as rock and wanting to emulate the sounds and wanting to emulate the sounds.

"And I don't think it'll just be drummers. It'll be DJs and electronic musicians that want more movement onstage. It can be pretty boring to sit there and watch someone look at a computer screen. But break out out that melodic part or vocal hook of a song and play it and people can see my arms moving — all that will go into it as well."

The future: With Sensory Percussion we may finally be able to rethink the division between traditional acoustic drums and their electronic successors. The benefits of traditional drums provides — including the greater freedom improvise, perform in a dynamic fashion and get the human rhythmic feel that science has proved is far more appealing than mechanical electronic drums — can now filter through into digital music. Sensory Percussion could keep the art of drumming alive for the hip-hop and EDM generation, if we choose to let it. Check out Sunhouse's Kickstarter page to support the change you want to see.