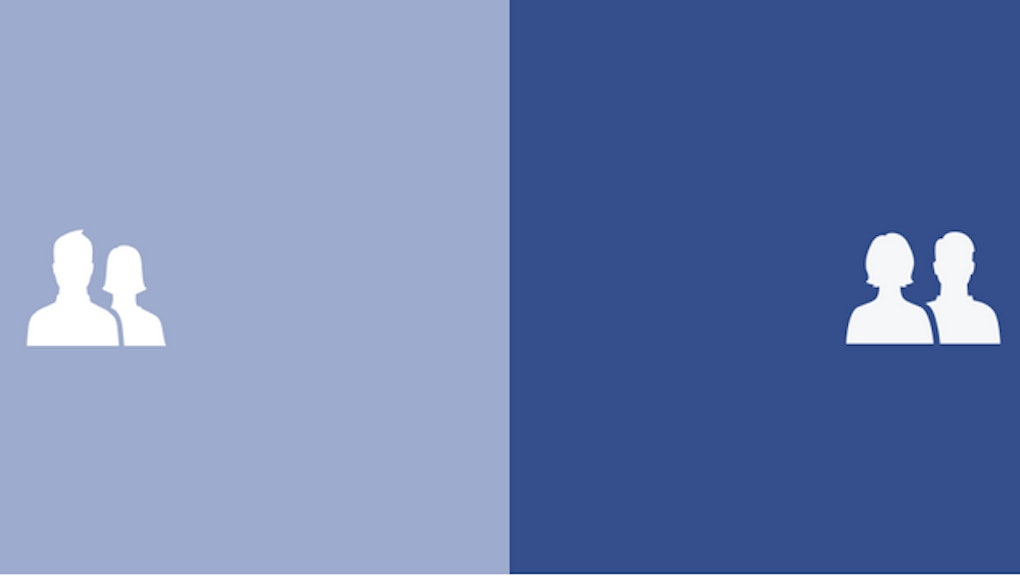 One small step for faceless Facebook icons, one giant leap for women on the Internet.

"Giant leap" may be a slight exaggeration. But Facebook's latest redesign, as minor as it may seem, is a victory to be savored when it comes to being a woman on the Internet, which feels all too often like our needs are less important than men's.

On Tuesday, Caitlin Winner, a design manager at Facebook, revealed that she had tweaked the social network's friends icon to put the female figure in front of the male figure and to make the two the same size. Previously, the female "friend" had been relegated to a position behind the male "friend" — and in the process, she was given a literal chip on her shoulder to ensure the two designs fit together seamlessly.

This, she decided, wouldn't do.

"As a woman, educated at a women's college, it was hard not to read into the symbolism of the current icon," she writes in a Medium post. "The woman was quite literally in the shadow of the man, she was not in a position to lean in."

She set to work, trying a variety of combinations before she found the right one. "My first idea was to draw a double silhouette, two people of equal sizes without a hard line indicating who was in front," she explains. "Dozens of iterations later, I abandoned this approach after failing to make an icon that didn't look like a two headed mythical beast. I placed the lady, slightly smaller, in front of the man."

Here are the two versions — older one on the left, newer iteration on the right — side by side:

She also adjusted the positioning of the group icon, placing the female silhouette — who now sports a new bob haircut — in the foreground, flanked by two male figures:

She initially worried that the changes, which she undertook by herself, would ruffle feathers. As it turned out, she had nothing to be concerned about.

"Instead, and somewhat magically, the new icons began to appear in new products across the company and our many platforms," she writes. An engineer put them into the desktop web version for employees; the "master of icons" added Winner's icons into his own work.

It may seem like a thoughtless tweak, but changes like this can be remarkably powerful when it comes to changing long-held perceptions about gender. Winner, for her part, noted she'll be on the lookout for ways to implement small adjustments like this in the future — and she's asking the rest of us for suggestions, so head to caitlinwinner@fb.com if you have any.