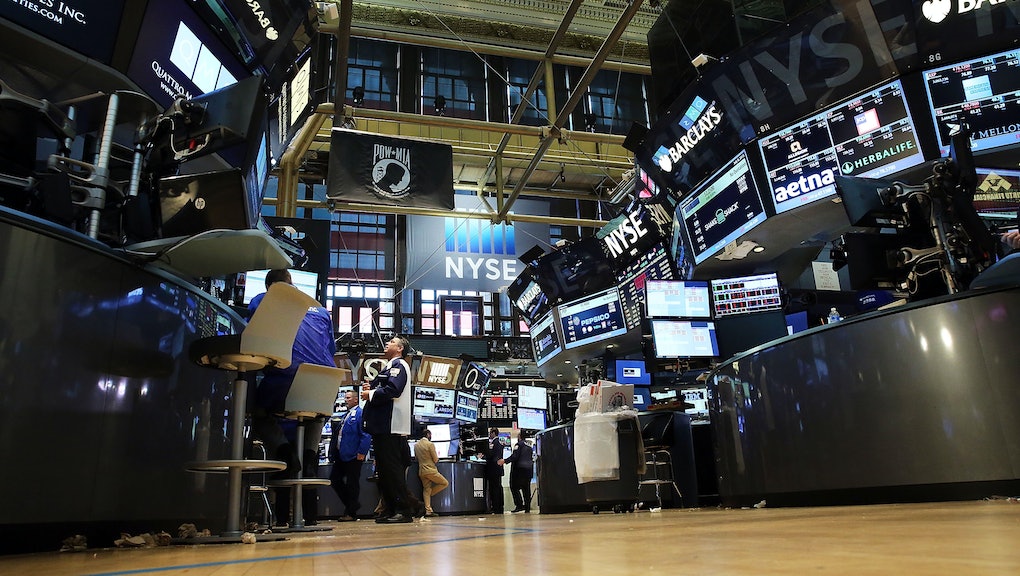 Forget the Stock Market: These Are the 5 Cyber Threats You Actually Need to Worry About

On Wednesday, in a perfect storm of total coincidence, a number of major institutions — the New York Stock Exchange chief among them — experienced minor technical problems. It caused a pause in day trading, grounded some flights and made the Wall Street Journal temporarily unavailable online.

Conspiracy theorists latched on pretty quickly (if not facetiously) with the theory that the United States was under cyberattack by an organized and coordinated threat, either by another country or a hacker group like Anonymous — whose news platform ominously tweeted this prediction the night before.

Of course, that was simply not the case.

The New York Times later revealed that NYSE computers were just acting up after a system glitch. But while security for our financial institutions is vital, a temporary pause in the trading day isn't the apocalyptic disruption it's made out to be. When high-frequency trading algorithms act up and cause flash crashes, it can cause the loss of millions of dollars for a handful of investors.

As for you and me? We have way bigger problems to worry about in terms of cyberthreats — today and in the very near future.

1. Hackers can use your nude selfies to blackmail you

Hackers have been repeatedly jailed for gathering the nude selfies of strangers under false pretenses and using them as blackmail to illicit even more explicit photos. We shouldn't stop making nude art just because the forces of evil are out to expose us, of course. We should just  be aware of what we can do to minimize the threat of extortion while major tech companies and legislators catch up with the times.

How to defend yourself: Use a phone passcode that isn't just a four-digit PIN, with emojis if you ever get the chance. Don't back up your nudes to iCloud or another online storage system, or if you do, enable stronger security protocols like two-factor authentication. And be very, very sure that you know and trust the receiving party.

It used to be that if someone cracked your Twitter account, the worst that could happen to you is that someone would make some post about butts and you'd have to delete it once you noticed, hopefully before someone important saw.

But Facebook and Twitter particularly have carved out bigger roles in your life over the past few years, all thanks to something called OAuth. That's where you give a social media account like Facebook permission to provide certain elements of your information to another service, like Spotify or Tinder, without actually giving your login info to those services. Using your Facebook account as your federated identity — which is exactly what Facebook is counting on for the future of their business — means that someone in possession of your Facebook account becomes the master of a whole host of your life services.

How to defend yourself: When you have the option of logging in with social media or making a new account, choose the latter and make a strong password. If you have to log in with another social media account, read closely where it tells you exactly what the new, connected service will be able to see and have access to.

3. Someone could steal your Social Security number today and impersonate you 10 years down the line

According to the Pew Research Center, most people consider their Social Security numbers to be the most important piece of personal identifying information. They're also a personal data nightmare.

Of course, it's a total slog to change them. Worst of all, you never know if the person you hand it over to at the gym or at your kid's school is just storing them on an Excel sheet saved in a shared "My Documents" folder.

And when a health insurance provider like Anthem gets hacked, exposing the SSNs of up to 80 million customers to what is presumed to be a state-level Chinese hacking group, that compromise could last the rest of your life.

How to defend yourself: Ask your health provider, school or whoever you give your money to how they're protecting that information. Even if you can't defend something you've given away, you can hold them accountable later if they fail. People are known to get pretty sick deals when hackers make away with their data.

4. You home appliances could wake up one night and kill you

The Internet of Things is on its way — a magical world where your air conditioner knows that you're sweating it out and turns on by itself, and your fridge knows when you're out of milk and orders you more. With the rise of Nest, Wink and other Internet-connected systems, American homes are filling up with lightbulbs, refrigerators, door locks, thermostats and even security cameras that you can manipulate remotely.

But it also opens up a fantasy world of hackers who can cook up scenarios straight out of a horror adaption of The Brave Little Toaster. Consider an oven that turns on while you're asleep and a nanny cam that sends a live feed out into the world without your knowledge.

How to defend yourself: Avoid connected devices that don't come from major, brand-name providers with proven track records — think Google and GE, the kind of people who can be held accountable.

Military hackers have, in demonstrations, proven that they can use software-based hacking to kill a car's engine.

5. Someone can cut down an entire airline — or cut your car brakes from miles away

One of the tech hiccups this morning was an error in operational management software that grounded every United Airlines plane and affected 4,900 flights.

But airlines aren't the only industry that will lean hard on computerized navigation and management. Companies like Google and Uber want the country's urban centers to run on networked fleets of self-driving cars, where algorithms are literally in the drivers seat. Even the traditional cars we've had are more Internet connected — military hackers have, in demonstrations, proven that they can use software-based hacking to kills a car's engine.

How to defend yourself: Limited options. Support airlines, transit institutions and politicians who have a track record of protecting citizen privacy and security. It's not ideal, we know.