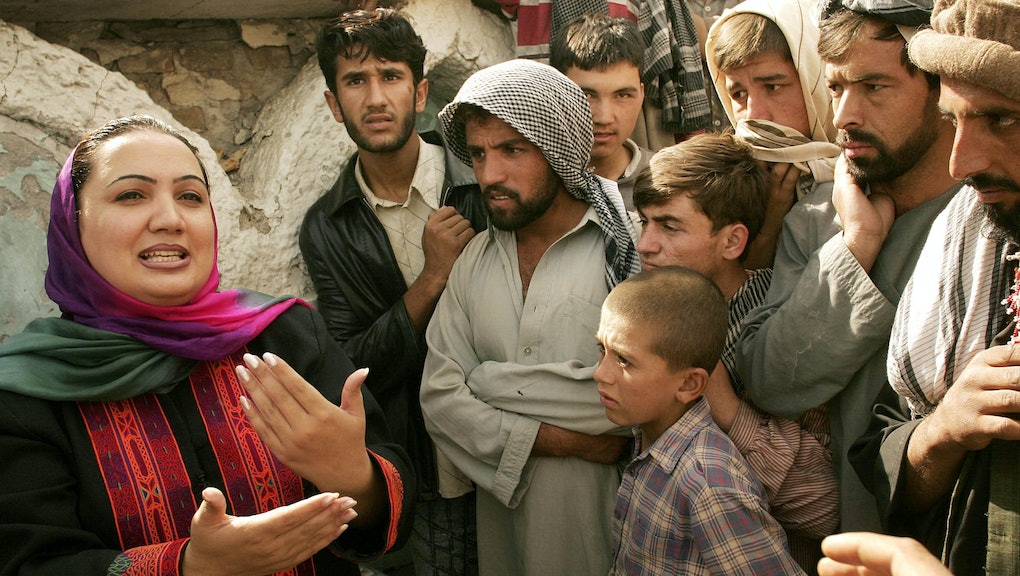 Shukria Barakzai has endured a miscarriage from Taliban attacks, a secretly polygamous husband, street beatings by extremists, an aggressive opposition campaign from that same husband and multiple assassination attempts. Just one of these would stop most normal people in their tracks.

But Barakzai is not normal people. She is a feminist politician reshaping the social and political landscape of Afghanistan.

Equal rights: While Barakzai was lobbying for women's rights, her husband, whom she described as previously being her "best friend," took a second wife without telling her. "I don't know if I should say that it was the most bad accident of my life or another wake-up call, because I was and I am against polygamy," Barakzai said. She found out about the second wife not from her husband himself, but through rumors.

At the time, she happened to be battling her male colleagues on the Constitutional Drafting Committee for equal treatment of women under the law. The irony of her personal life only added to the humiliation.

But she kept up the campaign, and when the 2005 parliamentary elections came along and women were allowed to participate, Barakzai ran for office in part to effect change for gender equality — a campaign that included the promise to outlaw misogynistic practices like polygamy. But her husband was one of many male competitors who challenged her for the parliamentary seat.

"He was a multimillionaire at that time. [He] spent half a million U.S. dollars, [with] big pollsters, and I was like a poor woman with one microphone, with a loudspeaker. I did a street campaign," Barakzai told Mic, recounting her political race a decade ago. "Even today it's not an easy job for any woman to [be using] a loudspeaker and walking on the street and asking for democracy and explaining the election and asking men and women to vote for a woman."

"Luckily, I got triple — or maybe four times — the votes" that her husband did, Barakzai said in a matter-of-fact tone.

She believes she won because she didn't run on slogans, but instead built a campaign on two simple ideas: rights and justice. "We all are thirsty for that. Justice in Afghanistan is like oxygen for us," she told Mic.

Barakzai was fighting back long before she took office. She was galvanized into action years before she became a politician. After the Taliban beat her in the street for not being accompanied by a male family member, Barakzai had an awakening. She recalled a range of emotions on that day: "I feel very sad and disappoint[ed], I cry a lot. But I remember, when I stand up on the street, I feel double energy," she said. "And that energy made my future: to be someone, to stand against injustice and to fight for equality."

The incident spurred Barakzai into action. She started an underground school for girls, and her students would hide learning materials under their burqas and clothes — places police are not allowed to search on a women. "More than four times [the] Taliban came back to my house, back to my doors, but they never [discovered] it was me" running the school, Barakzai said.

A target: Still, the rebel paid a heavy price for her activism. She has been the target of numerous assassination attempts and death threats, a number of which are loudly rumored to be orchestrated by the Taliban.

"I was in my car, driving to my work in the parliament, but that morning I was a bit late ... I still remember the red car which came [in]to my car," she says of the attempt on her life Nov. 16, 2014. Nine people died, but Barakzai emerged from the car to help other victims while parts of her body and clothing were still burning.

Shortly after the explosion, Barakzai made a national address from the hospital, still visibly injured. She was adamant to show her fellow Afghans she wasn't defeated and that, no matter how much extremists terrorized her, she would not let her voice fall silent. She hoped the image of her defiance would inspire the country to not capitulate in the face of fundamentalist threats.

A refusal to be defeated: In June, Barakzai met with a Taliban delegation in Oslo, Norway, to negotiate and discuss the possibility of a power-sharing deal that includes equal rights for all Afghans. She describes meeting them as a difficult decision after the years of oppression, public beatings and assassination attempts, one of which involved miscarriage, they had subjected her to.

"I was then asking myself whether I am prepared or not, whether I am ready or not ... Too much anger was inside [of me]," Barakzai said of her conflict. "It was because of them I lost my two kids. Because of them the country was being divided." Precisely because of the latter, Barakzai pushed herself to go, making history given the rarity of the Taliban's negotiating with women.

Barakzai left Oslo making it clear that peace — laying down arms — was non-negotiable. At a minimum, she needed that for her country. As a chairwoman of the Defiance Committee and a member of the Standing Committee on Peace and International Security of the Inter-Parliamentary Union, she has devoted much of her time as a politician advocating for peace and stability.

Both the Taliban and female Afghan lawmakers concluded the talks with a mutual understanding that dialogue between them had to remain open in order to move forward. The mutual agreement to meet was in itself tremendously symbolic, signaling the possibility of the Afghan government and the Taliban coming to an agreement to restore peace. The Taliban's resistance to the established government mires the country in violence; given the group's track record on gender equality, the willingness to meet with female politicians and lawmakers is a sign of hope for many. It is also a testament to how successfully Barakzai has established herself as a respected voice in Afghanistan's political landscape.

The future: Barakzai shows no sign of letting up or slowing down. Afghanistan has been starved of an inspiring female role model because of the political tumult and concomitant volatility of the last several decades. Given the tremendous impact she's made already, Barakzai is likely to keep surprising her country — and the world — for the better.

Listen to portions of Mic's interview with Shukria Barakzai here: