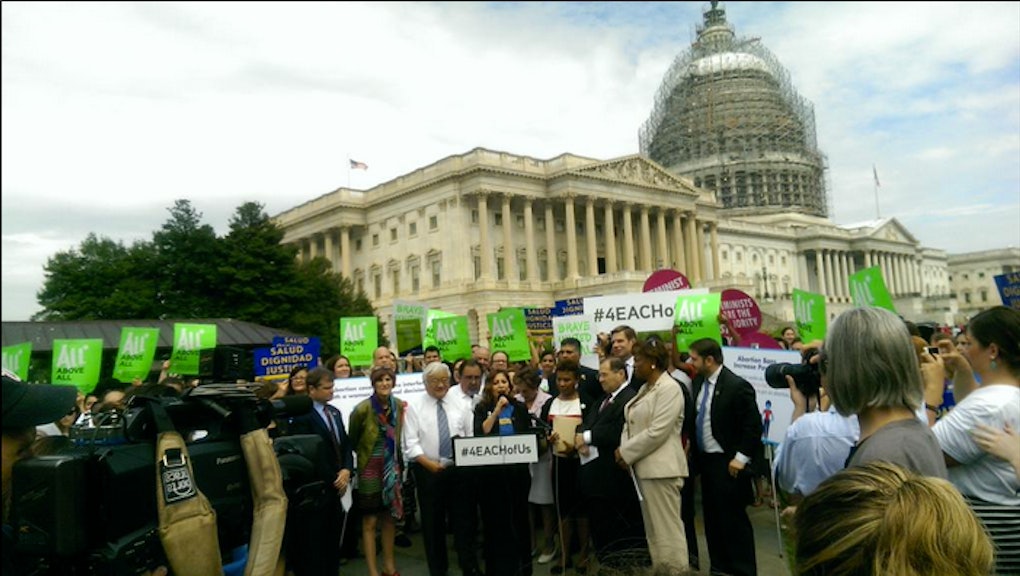 Though Roe v. Wade made abortion legally accessible more than 40 years ago, women's reproductive rights remain disturbingly precarious in the United States. A whopping 282 abortion restrictions have been enacted since 2010 — 51 of them in the first half of this year alone, according to the Guttmacher Institute. But a group of Democratic Congress members — backed by 70 Congressional co-sponsors and 36 women's health and reproductive rights organizations — are pushing back to dismantle one of the most restrictive policies at its heart.

Since 1976, the Hyde Amendment has prevented Medicaid from paying for abortions, even when a pregnancy puts a woman's health at risk. The amendment particularly disadvantages the 12.5 million predominately low-income women ages 19 to 64 who have Medicaid coverage according to Planned Parenthood. The Affordable Care Act also explicitly adheres to the amendment as well.

But the EACH Woman Act (Equal Access to Abortion Coverage in Health Insurance), introduced Wednesday, would serve a lethal blow to this legislation by requiring insurance plans and programs offered or managed by the government to cover abortion services. Additionally, individuals enrolled in private health insurance plans would not face political interference in their coverage. Ultimately, as the organization behind the act, All Above All, states on its website,"The bill respects that every woman should be able to make her own decisions about pregnancy."

This does not mean an abortion free-for-all: Though it may seem counterintuitive to some, making abortion inaccessible doesn't decrease its rate of occurrence.

Research shows women in states with strict abortion restrictions or bans aren't deterred from obtaining them, but are rather forced to pursue less-than-ideal alternatives. For example, a recent Associated Press report found that the only states with an increase in abortion during a time otherwise marked by declining rates were states whose neighbors passed restrictions — like Michigan (up 18.5% since 2010) and Louisiana (where abortions increased 12% between 2010 and 2014), whose respective neighbors Ohio and Texas have passed stringent restrictions.

These bans didn't dissuade women from pursuing the reproductive choice that made the most sense for them: It just imposed the burden of lost time and money by forcing them to cross state lines to act on their choice.

And, of course, this burden most severely impacts already disadvantaged populations, like low-income women, women of color, and young women.

"None of us should have our reproductive rights denied simply because we are struggling to make ends meet," Miriam W. Yeung, executive director of the National Asian Pacific American Women's Forum, wrote about the legislation. "We cannot leave our reproductive rights to the whim of politicians who use financial blackmail to coerce and influence our personal decision-making."

The EACH Woman Act has a long way to go before possibly becoming law, but hopefully individuals across the country will heed the calls of the act's supporters and fight back against this "financial blackmail." After all, as Yeung put it, while the legislation may not destroy every barrier to abortion access, it would allow every woman to "truly have the right to determine her own future. And isn't that something each of us deserves?"