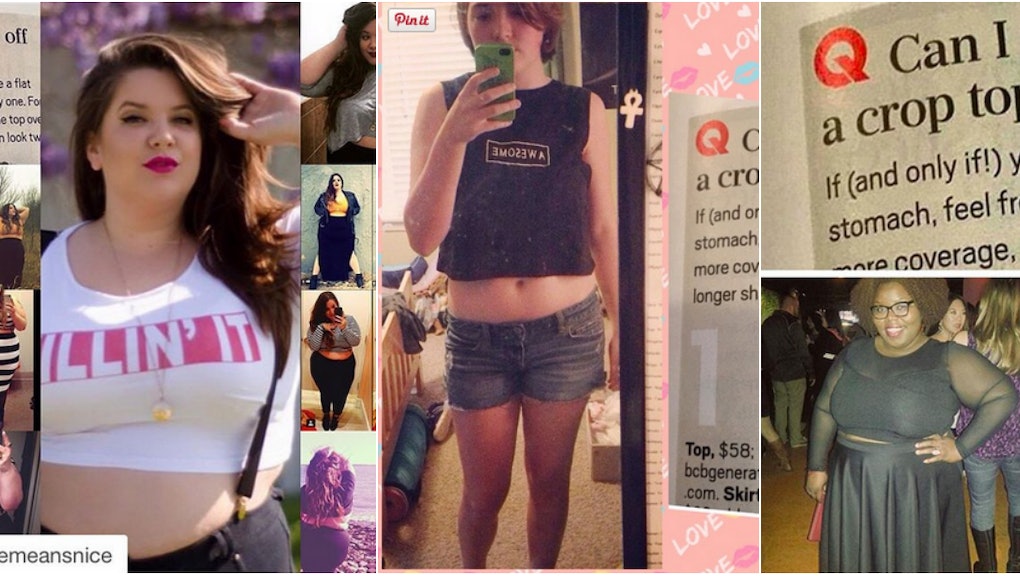 The #RocktheCrop Hashtag Is Empowering for All the Right Reasons

That was the seven-word question posed in a Q&A section of O, The Oprah Magazine that sparked outrage, birthed a hashtag and prompted plenty of photos of crop-top wearing women to post their own badass responses.

The furor online is aimed at the short and decisive response given in the style Q&A of the magazine. In his answer to the question, "Can I pull off a crop top," O's creative director, Adam Glassman, stated only women with a flat stomach can pull off a crop top.

"If (and only if!) you have a flat stomach, feel free to try one," he wrote in his response, published by the magazine.

That didn't sit well with some female readers.

After writer Tamar Anitai stumbled on the section in the magazine, she took to Instagram and chastised the magazine for body-shaming its readers and telling women what they can and cannot wear:

Surprised to see this level of #bodyshaming (????) in Oprah magazine. The feature is about women feeling healthy. Part of health is self-esteem and that's intrinsically connected to body image. Stop telling women what they CAN'T wear. We can wear and do and be ANYTHING that makes us feel strong, powerful, passionate and in charge of our own destinies. I hope young women and women of any age don't feel like they're restricted by editorially imposed fashion "rules." The only rules are there are no rules. Wear what you love, what makes you feel confident, and own it. Confidence is power, and it's contagious. ????????????????????????????????????????????

In the post, Anitai tagged StyleIt blogger Sarah Conley, who turned it into a call to action, according to BuzzFeed. In a blog post, Conley called others to post photos of themselves wearing crop tops under the hashtag #RockTheCrop — the clear reminder that having a flat stomach isn't a prerequisite for fashion.

And women started joining in.

Even Tess Holliday, the plus size model who graced People magazine in May chimed in to the conversation.

"I can't take credit for the first person to use #rockthecrop, but I thought it was important to merge our conversations about O Magazine into a safe environment where crop tops were being celebrated by women of all sizes. I #rockthecrop, you #rockthecrop, we can all #rockthecrop!" Conley told Mic via email.

"Even if you're thin, you may not be able to achieve a flat stomach. Even worse than being body-shaming, it's narrow-minded and inaccurate," she added.

She even tweeted a photo of herself wearing a crop top to Glassman. He seemed to take the issue in stride when he retweeted the photo along with a "Bravo. And fun!"

Despite the kind sentiment of Glassman's response, it overlooks a clear conflict between fashion editors and readers. Editors have long held the reigns on what's "in" or "out," and style Q&As are a regular part of fashion magazine. There are, of course, tips and "best practices" for fashion (e.g. vertical stripes are more slimming than horizontal), which are the insights editors can offer.

But as Conley wrote, "I'd hoped in the era of the fatkini, plus-size bloggers and Instagram hashtags that we've moved beyond such narrow-minded thinking, but I can see now that it's time for a show and tell."

That narrow-minded thinking has dominated magazines for years, in which thin bodies have reigned supreme with "damaging" effects, Conley said. The solution is not to necessarily banish style advice, but to consider multiple perspectives.

"It can be challenging to write about what you don't know or haven't experienced," Conley said. "If you've never had to worry about a store not carrying your size, not being able to shop with your friends, or the complications brought on by the majority of your options being online only, then maybe your voice shouldn't be the only one that is being presented" in magazines.

In the meantime, fashion editors can take a look at #RockTheCrop to learn from women themselves.

After seeing the photos under #RockTheCrop, Conley tweeted: "We're so beautiful!"

And it's true: There's nothing more beautiful than a confident woman, smiling and in love with her body. That's the ultimate style advice magazines can offer.

July 9, 12:12 pm: A spokesperson from O, The Oprah Magazine responded with the following statement, sent to Mic: "We support, encourage and empower all women to look great, feel confident and live their best lives – in this case, we could have expressed it better. We appreciate the feedback and will be more mindful going forward."