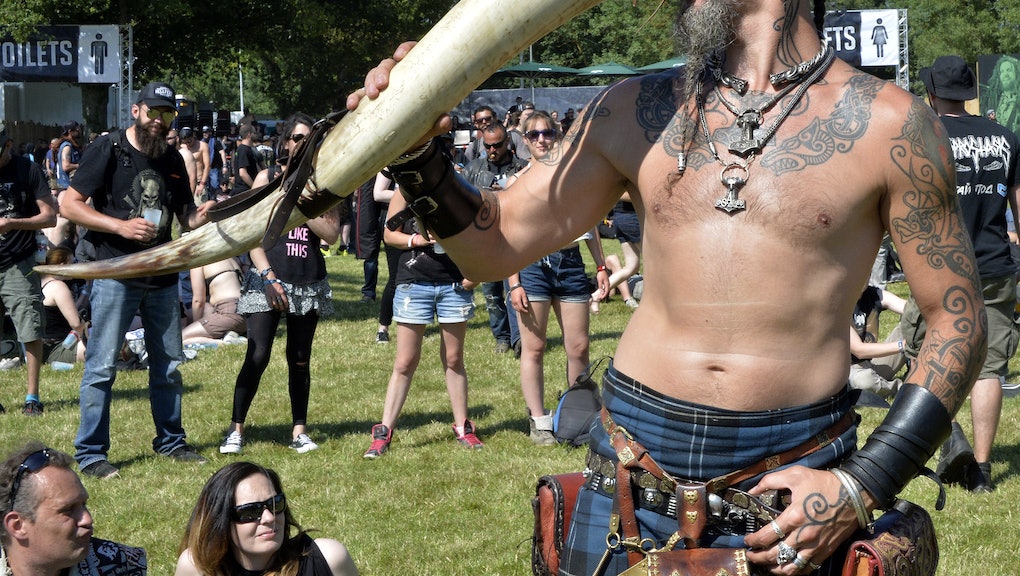 Throughout the '80s, metal was the most persecuted genre in music. Afraid of its punishing sounds and explicit lyrical content, Tipper Gore and the Parents Music Resource Center led campaigns on Capitol Hill to ban and censor the music. Individual families attempted to sue metal bands like Judas Priest for driving their sons to suicide by including subliminal messages in their music. Even the U.S. surgeon general argued metal was similar to pornography, and the graphic imagery in its videos would lead to "suicide, Satanism and drug and alcohol abuse" among youth, according to the New York Times.

Though this paranoia has subsided somewhat, metal fans are still misunderstood. And no unbiased experts actually ever checked to see whether any of these fears concerning our metal-tainted youth had any basis at all. A group of researchers finally have, and it turns out the Satanic Panic was mindless paranoia. According to a new study, '80s metal fans have grown into "middle-class, gainfully employed, relatively well-educated" adults who are "significantly happier in their youth and better adjusted currently" than their peers who took to other genres.

This research applies specifically to metal, though it may help vindicate fans of all aggressive and explicit genres, such as hip-hop, punk and various forms of hardcore. Confrontational music does not destroy our youth. It may provide exactly the outlets they need to help them find themselves.

The study: Led by psychologist Tasha Howe of Humboldt State University, the study surveyed 377 participants — 154 of them metal fans, musicians and groupies in the '80s, plus 80 fans of other genres and 153 students at a California university. Each of the groups answered personal questions about their youth, such as "the number of sex partners, suicide attempts, seeking counseling, using sex as leverage to get something they wanted, number of marriage partners, missing work due to problems, education, income." They were also asked to evaluate their current happiness.

Researchers found that despite "stressful and risky events in their youth, all three metal groups reported higher levels of youthful happiness" than fans of other genres or the surveyed college students. Metalheads were also less likely to express regret for anything they did in their youth. As an extension, they did not seek psychological counseling for emotional problems in middle age to the same degree as fans of other genres did. Though they never inspired half the media frenzy, Madonna and Toto fans may have truly been the ones who needed their demons exorcised.

One big happy heavy metal family: Researchers also found that while many '80s metalheads did come from troubled homes and engaged in a heavy rock 'n' roll lifestyle, they were not significantly more likely to attempt suicide or have sex at earlier ages than other kids. They also were far more able to ameliorate the negative effects of any of these risks because they had something other fan groups did not have to the same degree: a support system.

"Fans and musicians alike felt a kinship in the metal community," the study's authors write, "and a way to experience heightened emotions and intense connections with like-minded people, which seemed to contribute to their eventual positive identity development."

This community aspect is something the metal community has always prided itself on. And it complements the findings of previous studies on metalheads, which find metal as a subculture can offer a nurturing community for alienated youth. Research from University of Westminster found in 2013 the "catharsis afforded by heavy metal may, in turn, help boost self-worth and promote positive self-evaluations among those with otherwise low self-esteem." Metal may truly be the best genre for helping young people work out the identity crises that come with adolescence.

Of course, the study has its shortcomings: It only reached fans who were "relatively high-functioning individuals who volunteered to participate and report on their lives." Pacific Standard points out that the drug addicts or suicidal individuals who relied on metal in the '80s would not be available to sit down for a long, tedious survey. But still, the comparisons to the other fans and today's youth are striking and do a lot to combat the stereotypes that metalheads are violent, depressive dangers to themselves and others.

Maybe those of today's youth struggling to find themselves should take a taste of High on Fire or Liturgy and see if it suits them. They will not go over to the devil. They may simply grow up into "middle-class, gainfully employed, relatively well-educated" adults with heads full of bloody, debauched memories to fall back on when life gets too boring.