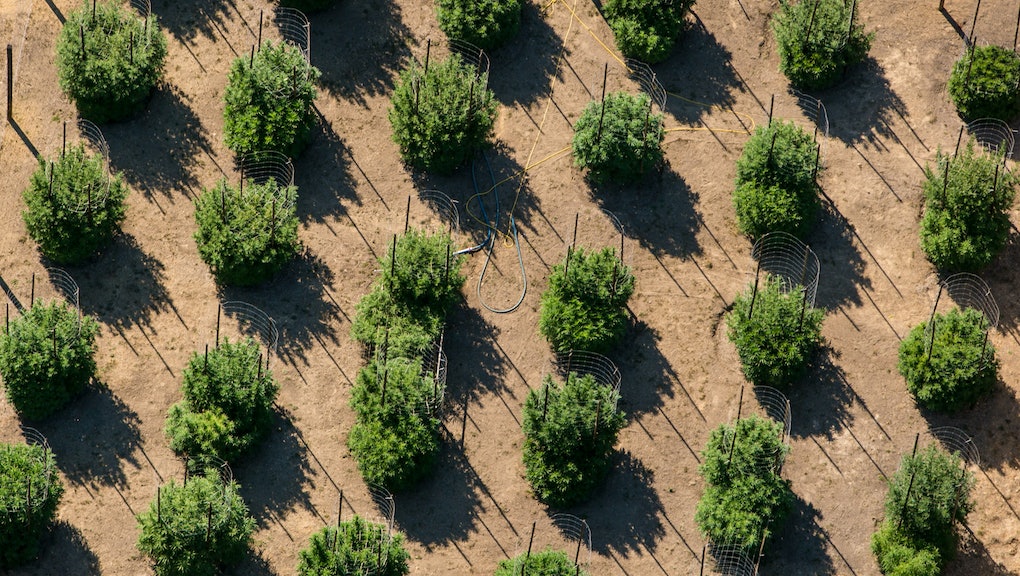 As California enters the fourth year of a historic drought that has cost the state billions of dollars and thousands of jobs, the parched residents of the Golden State are in the midst of an agricultural witch-hunt to name a scapegoat for the water shortage. Some blame the beef industry; others deem the almond the source for the state's woes; broccoli (already unpopular) is getting its share of the finger-pointing as well.

But as residents struggle to comply with draconian regulations aimed at curbing water usage, a new culprit has emerged: illegal marijuana growth operations.

Marijuana, it turns out, is one thirsty plant. No raindrop feels responsible for a flood, and no stoner feels responsible for a water shortage, but a cursory look at the scale of California's illegal marijuana growth industry indicates the state's most famous agricultural commodity is making major waves. Indigenous to the humid river valleys of Central Asia and the Indian subcontinent, a single cannabis plant sucks up nearly six gallons of water per day — the same amount of water needed to sustain a head of broccoli for an entire growing season.

According to the Drug Enforcement Administration's Cannabis Eradication program, the government agency tasked with fighting the war on drugs seized 4,300,833 illegal marijuana plants in 2014 — the bulk from grow operations in California. Had those plants been allowed to reach full maturity over marijuana's five-month growing season, they would have sucked up nearly 4.7 billion gallons of water. That's enough to keep meet the water needs of every single person in San Francisco for more than four months.

California law enforcement has already started cracking down on illegal grow operations for stealing municipal water. Following a massive June raid in Humboldt, Mendocino and Trinity counties — an area nicknamed the Emerald Triangle for its high concentration of marijuana growing operations — county law enforcement accused illegal growers of using streambed alterations and artificial reservoirs to siphon half a million gallons of water a day from a nearby river.

"Some of the areas had the most devastation that I've ever seen," Lt. Chris Stoots of the California Department of Fish and Wildlife told the Ukiah Daily Journal. "The amount of water and tanks out there was unreal."

Cannabis growers say they're trying to combat the problem. According to California Cannabis Voice Humboldt, a local political action group that advocates for the responsible cultivation of marijuana, some of those arrested in the raid were members of its organization.

"We have been more than public and vocal that we're against trespass grows, water diversions, pesticide use and illegal grading of properties," Richard Marks, the group's former executive director, told a local newspaper. "We would applaud the sheriff's office to continue those efforts to eradicate those farms. But why they decided to choose private property owners that were trying to come into compliance — we're a little bit disappointed."

Some marijuana farmers are encouraging grow operations to cultivate drought-resistant strains of cannabis from Afghanistan (hey, it worked for the Taliban). After all, no particular strain is particularly more profitable than another, and as pot farmer advocate Hezekiah Allen told Mother Jones, the dollars-per-gallon financial yield of marijuana makes it the most efficient crop in the entire state.

"If we step back and take a look at this industry and the jobs that it creates, California cannot afford not to grow cannabis in the 21st century," Allen said. "It's one of the most adaptable, resource-efficient ways of generating revenue on small farms."

What would really help, the growers and their allies say, would be to simply legalize marijuana. For one thing, it would push growers out of remote, environmentally sensitive areas like the Emerald Triangle. When hills are graded by grow operations, the removal of precious topsoil means that runoff into nearby streams ends up choking waterways with silt and mud, lowering the water quality of the entire watershed. Throw in unregulated pesticides and fertilizer, and the effects of lawless marijuana cultivation can harm countless downstream residents.

If marijuana were legalized, advocates say, it would encourage grow operations to relocate to areas where their farms would be more efficient. "Cannabis farming doesn't happen out in the woods in Humboldt County because that's a good place to grow things," Cris Carrigan, director of the California water board's office of enforcement, told the New York Times. "It happens because you can hide there."

In short, if marijuana were regulated like broccoli, growers would likely move their operations out of the woods and onto actual farmland, where their water expenditures could be monitored by the state. It would also allow environmentally conscious California consumers to spend their green (dollars) on marijuana certified to be grown responsibly — or, at least, as responsibly as almonds.