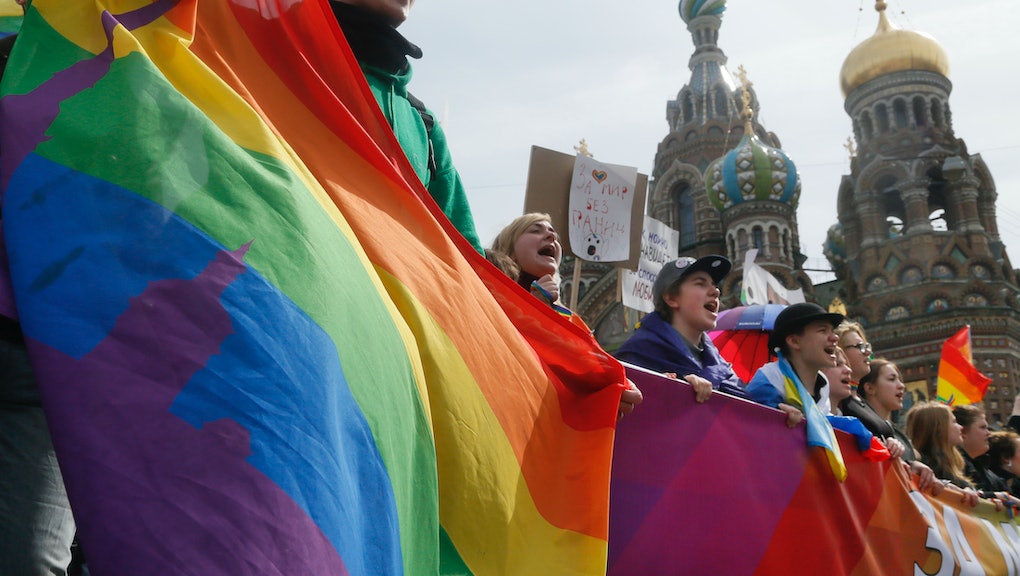 "We have to warn about gay fever at home and maintain traditional values," Alexey Lisovenko, a top figure of Russian United, the political party behind a new heteronormative flag, told Russian news outlet Izvestia.

The flag, depicting a heteronormative family, was created to counteract the ubiquitous rainbow flag that has become synonymous with LGBTQ rights and has been gaining popularity throughout the generally homophobic country. "This is our response to same-sex marriage, a mockery of the concept of family," Lisovenko explained.

Their flag was posted to social media with an accompanying hashtag that translates to #RealFamily. However, it didn't take long before LGBT Russians and allies, along with supporters across the globe, co-opted the hashtag and started posting pictures of same-sex couples and families with it. The hashtag was also accompanied by messages of peace, love and acceptance.

Moscow rule: In 2013, Russian President Vladimir Putin signed a law banning the vaguely described "homosexual propaganda" and allowing the state to heftily fine anyone who disobeys, prompting homosexual hate crimes and stifling the country's LGBT communities. The legislation bans all material "directed at forming nontraditional sexual setup" or that suggests same-sex and opposite-sex couples are "socially equivalent," according to the Telegraph.

Controversy surrounding Russia's official stance on homosexuality percolated in January 2014, when the country hosted the winter Olympics in Sochi. Current and former gay athletes urged the Olympic committee and Russian government to officially ban discrimination against homosexuality, but Putin did not capitulate.

While the LGBT rights activists' counterattack to institutionalized bigotry on social media is encouraging, all the same-sex couples and families only portrayed men. The exclusion of any women from the campaign speaks volumes regarding how far Russia still has to go. But, while it may not be perfect, campaigns such as these certainly help give a voice to a demographic traditionally marginalized there. It's a step in the right direction.