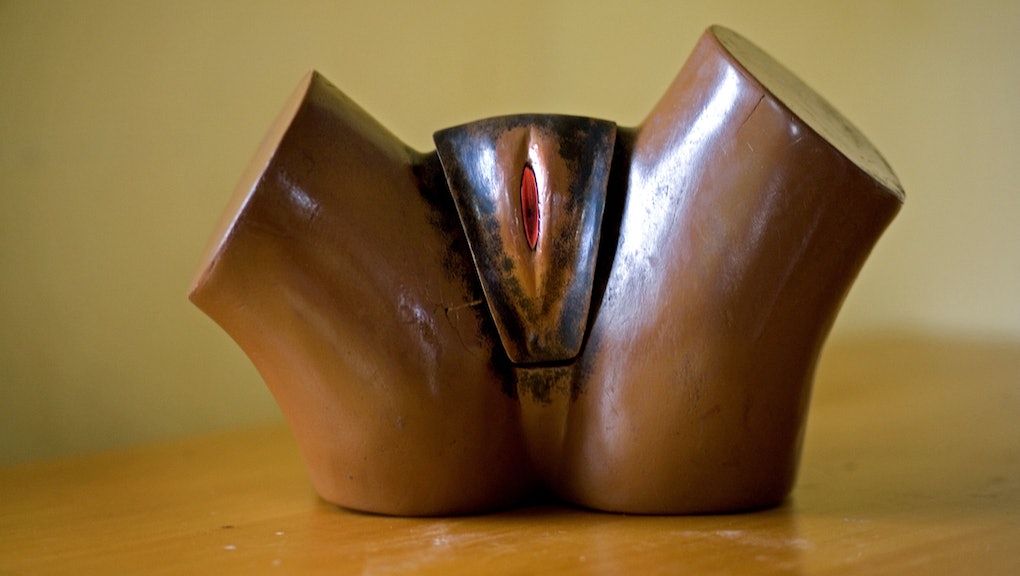 To those who have them, and especially to those who don't, vaginas can be a mystery.

It makes sense, really. In addition to the historical taboos associated with female sexuality — unlike manhood, which metaphorically and literally dangles proudly out in the open — the vagina sits quietly tucked away, out of sight and out of mind. The result is that many heterosexual men are positively baffled by the female anatomy.

Of course, it goes without saying that our lack of understanding of the human anatomy goes both ways: After all, it's not like women know everything about penises, either. But for those dudes who feel like they could use a refresher course in the female reproductive system, we surveyed a bunch of 20-something women to find out what they really wish men knew about their vaginas. Here's what they had to say:

First, you should learn what a vagina is—and what it is not.

We all know that abstinence-only sex education in the United States has been, put simply, a colossal failure. One of the results of our poor sex education system is that most guys don't  have a clue as to what the vagina actually is (or even, in some cases, where it actually is).

"Honestly, most people don't know about the vagina at all," one respondent wrote. "I have known people that thought [women] peed through the vagina. They didn't know [they] had a urethra."

"It's general anatomy people should know," another respondent wrote. "If you ask a random person on the street about how a vagina is constructed, nine times out of 10 they won't know the difference between the actual vagina, clit, urethra, etc. Physiology is also misunderstood."

But hey — at least some men knew there was a "baby hole."

You have to pay attention to the clitoris.

The clitoris is the only organ in the human body that exists for pleasure alone. With some 8,000 nerve endings, the clitoris is the epicenter of orgasm, especially since only about 25% of women can reportedly orgasm from intercourse alone. That's why it's so important for men to have a comprehensive understanding of how the clitoris works.

"NEVER underestimate the importance of the clit," one woman wrote. "Tons of women orgasm solely from clit stimulation and not from penetration at all." Another respondent echoed the sentiment: "We don't turn on like a damn light switch, [the vagina] has to be warmed up first. Literally...To satisfy us, pay attention to the clit. We thank you in advance."

For this reason, the importance of paying attention to the clitoris during sex was a recurring theme throughout the survey. As one woman bluntly put it in her advice to future partners: "The majority of women prefer clit stimulation to vaginal because the vagina is basically numb. Ask the vagina-haver what their preference is before becoming a human jackhammer."

That said, you need to approach the clit with care.

Apparently, while some dudes aren't paying enough attention to the clitoris, others are focusing on it a bit too much. "Direct clitoral stimulation sometimes hurts," one respondent advised, while another chimed in: "Clits are pretty damn sensitive. There is such a thing as too much stimulation, and it is NOT fun."

The other parts of the vagina need love too.

Although the clitoris is usually the star of the show when it comes to delivering orgasms, the rest of the vagina is sensitive in its own right. For example, the G-spot, which runs along the urethra on the anterior vaginal wall, is, for some women, even more of a pleasure zone than the clitoris.

Other ladies just think men should take the time to get to know their vaginas, rather than just heading for the G-spot or the clitoris. "The entire vulva is an erogenous zone. It isn't just plug and chug," one woman said. "I wish folks would get friendly and explore!"

That said, there's one thing all men would do well to keep in mind before they go spelunking: "Cut your nails."

Every woman has a certain amount of vaginal discharge, although the amount may vary throughout her menstrual cycle. In fact, these fluids keep the vagina healthy, flushing out any unnecessary bacteria and restoring its natural pH level.

So, gentlemen, if you spot a mysterious spot on the sheets or on your significant other's panties, don't bug out: It's totally normal. "That stain you see in your black underwear is normal because of the slight acidic discharge women have," one woman told Mic.

Some vaginas are allergic to latex.

Although less than 1% of the general population suffers from latex allergies, women who are allergic to latex typically have three common types of latex sensitivity. The first, and least threatening, can result in itching and burning skin; the second is a bit more severe and can possibly spread. The most dangerous of latex allergies is latex hypersensitivity, which results in not just skin issues but also cramps, pink eye, irregular heartbeat, pain, difficulty breathing and even anaphylactic shock.

"Latex allergies are more common than people think. Sometimes [having sex with a latex condom] burns, sometimes it doesn't," one respondent told Mic. "Sometimes you just get a horrible yeast infection. If your vagina doesn't feel right, try a different type of condom." In sum: Before you pull out the latex condom, you might want to double check that it's not going to send anyone to the emergency room.

Vaginas don't just magically lubricate themselves without any stimulation beforehand.

Some guys think that women's vaginas have the ability to self-lubricate without any arousal whatsoever, as if Niagara Falls itself was located in their pants. Sadly, that isn't the case. It takes a lot more than a few seconds of foreplay to prep a vagina for sexy time, especially if a woman is on the Pill or other medications like antidepressants.

If you want to know what a vagina wants, you should probably just ask.

Not only does communicating during sex give you a greater insight into what your partner wants or doesn't want, but a 2012 study also found that talking about sex while having sex makes for greater sexual satisfaction.

"Ask the person. Seriously. Stop generalizing what is good, bad and ugly. ASK," one frustrated woman wrote. Another chimed in: "I wish all people without vaginas would know to ask what the vagina-haver wants." Overall, when it comes to foreplay, it's best to adhere to the following words of wisdom: "Don't just blaze right in there. Patience is a virtue."