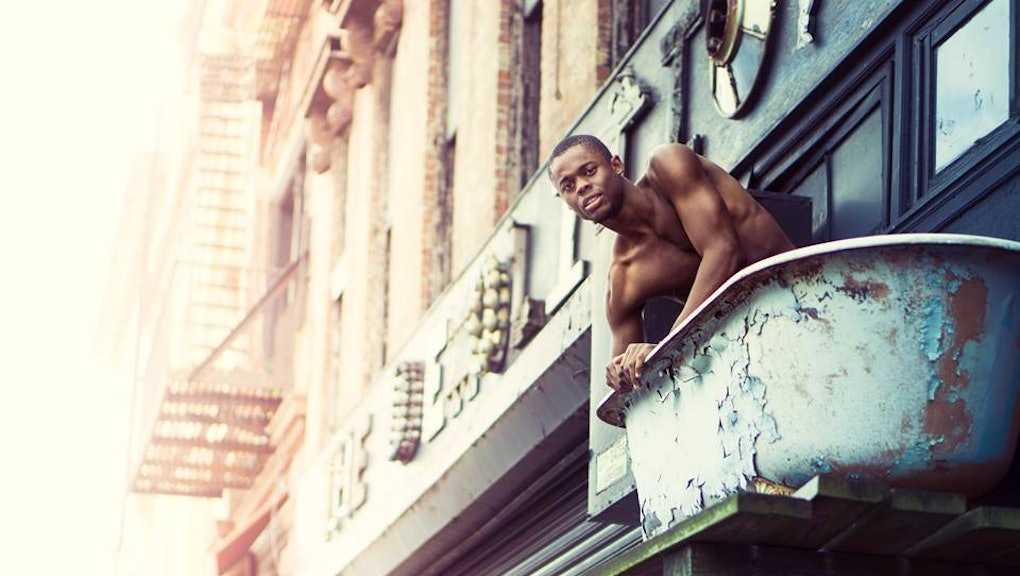 Prince Harvey understands how to hustle in 2015.

While working on his debut album, the 25-year-old New York City rapper suffered the kinds of setbacks that would have killed the drive of a lesser artist. "First, my computer basically crashed," Harvey told Mic. "I got it fixed at the Apple Store for free, but then my computer got stolen by my landlord. I just had to keep going and do what I needed to do." He started from scratch, and the Apple Store became his saving grace again.

By befriending a few employees, Harvey recorded his entire album using the microphones and computers set up at the Apple Store SoHo in New York City. Crafting all the beats using nothing but his voice (and the voices of a few other shoppers), Harvey crafted an album he's calling P.H.A.T.A.S.S. — Prince Harvey At The Apple Store: Soho. The tracks he's dropped are absolute fire, embodying the hustle that hip-hop has been about since day one.

How he pulled it off: Two employees that were moved by his mission helped take off some of the heat while Harvey recorded. He came every weekday for four months and saved his work by hiding his files in the computer's trash before he left at night in order to skirt the memory wipes the store performs. He occasionally sent himself files or used a portable hard drive, though these invited their own problems: During a fire drill, an employee disconnected his hard drive before he could save. One track was lost.

Though the hurdles were high, Harvey didn't want to let excuses crush his vision. "A lot of people give you excuses as to why they can't get shit done, and why they can't complete their projects or do what they need to do," Harvey told Mic. "I didn't want to be one of those people. And I also wanted to show my [artist] friends 'Hey, you don't need a lot.'"

P.H.A.T.A.S.S. themes: These messages of individuality and self-reliance weave throughout the album. "What I talk about on the album is how I was feeling at the time, and how I was dealing with rising rents in New York and the street culture," Harvey said. It comes through on the single "Sometimes," where he raps about struggling to see the positive when everything's trending towards the negative, including his bank statements.

He saw some pretty surreal things while camped out in front of that computer, glimpses at a completely different New York City than the one he was living in. "One time I saw this girl and she just walked in, and she said 'I need a computer.'" An employee pointed out one for $2,000 dollars. "And she was just like 'Okay, I'll take it.' She didn't ask for the specs, she didn't look at the model, she didn't compare prices. She was in and out of the store within 10 minutes. It was mind-blowing." He used it as motivation to keep spitting, dreaming of the day he would be able to walk into an Apple Store and drop two grand like it's pocket change.

A lot of the time, Harvey didn't want to be sneaking around the hectic sales floor. But he kept his head down, drowned it all out and pushed through. "It's like a soldier in battle," as he described it to Mic. "They don't want to be there, but they just know that they have a responsibility to themselves and other people, and just gotta get the job done."

It's this mentality that's gotten his work attention on major network news stations and major publications like the Daily Beast, Billboard and Paper. It's the mentality he feels everyone in his generation should have.

"My generation is really coming into its own. We have so much power. We're living in one of the fastest paced societies ever," Harvey told Mic. "We're creating a whole new world ... If you're not up on it, you're going to be left behind."

Check P.H.A.T.A.S.S. when it drops July 27. Harvey wouldn't confirm yes or no, but perhaps we'll see it on Apple Music, and the circle will be complete.