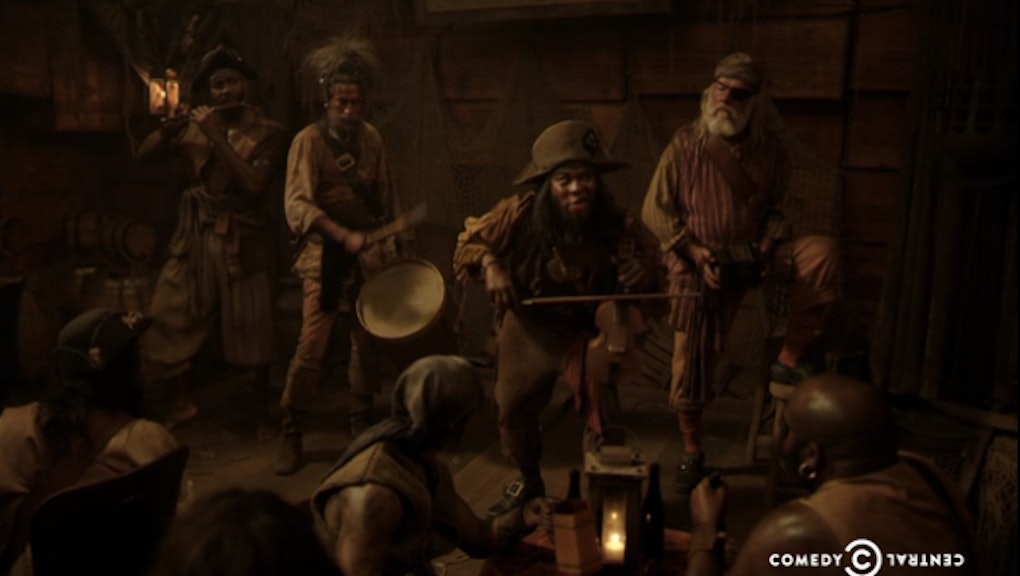 Media discussions surrounding rape culture and consent often happen within the context of tragedy: They're discussed retroactively, in the aftermath of horrible acts, rather than preventatively. But Comedy Central's dynamic duo Keegan Michael Key and Jordan Peele of the sketch show Key & Peele are countering that — in a pirate sketch, no less.

The pair's latest video opens on Key and Peele leading their fellow pirates in a rousing sea shanty.

"I once met a lass so fine," Pirate Peele sings. "She was dunk on barley wine / I'd been at sea for months a-three / I knew I could make her mine / And the lass was past consent! / So it was off with her we went / And we threw her in bed and rested her head / And we left because that's what gentlemen do."

The pirates then break out into the first round of their chorus, one which fraternities across the country would do well to adopt.

"Always take care of your lady fair / Because they deserve as much attention down there," the chorus concurs.

Other pirates around the room pitch in with their own tales of feminist allyship, including one who supported his partner when she decided to have an abortion because "it's her body and therefore her choice" and the dangers of making stereotypical, gendered assumptions about women's professions.

But how did these pirates become so enlightened, one might wonder? Their inspiration is revealed after one pirate infiltrator begins to sing objectifying, sexualized comments about a "slut." He is immediately shot dead by the group's leader, and presumable feminist force behind the group: a badass lady pirate.

This clip not only answers the burning question, What would troops of pirates chant about if they had been led by badass feminist women? but also reminds us that consent need not only be addressed after tragedy, but can — and should — also be a positive, preventative and even humorous topic of cultural discussion.