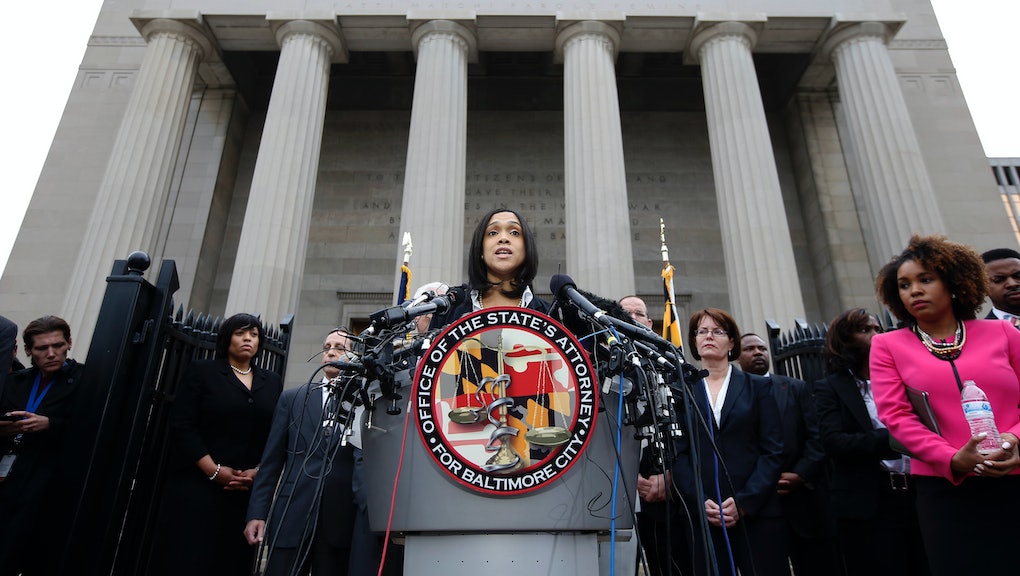 Turning the Corner on Race in America

Far too often, the conservative analysis of race dominates contemporary American public policy and national discourse. This was the unspoken but understood variable when Baltimore State's Attorney Marilyn Mosby approached the podium in the midst of Baltimore's unrest in May. Her willingness to fly in the face of this tradition resulted in one of the most important public statements made by a black elected official in recent memory.

Rather than caving in to the double standard rhetoric for policing, accountability and justice in black, brown and poor neighborhoods normalized over the years by officials and politicians alike, she told the plain, necessary truth. Calling for the need to develop "structural and systemic changes for generations to come," Mosby directly addressed those whose issues are rarely at the heart of America's collective public concern — black American youth:

"You're at the forefront of this cause," Mosby said. "And as young people, our time is now."

Such honesty is sorely missing from the manner in which this nation has historically approached resolving contemporary racial dilemmas.

Too many Americans routinely use stereotypes about people of color rooted in misinformation as a way of justifying institutional and structural racism. Such perspectives have come to hold far too much sway in the court of public opinion and in the arena of public policy in key areas of black life.

Rather than confront the inherent racism in America's criminal justice system and bring an end to the prison industrial complex, for example, these talking points have come to inform the public that the reason blacks are disproportionately incarcerated is because they commit the most crime. Or consider the decades-old jobs crisis facing blacks, who, for the last six decades, have endured unemployment rates of twice their white counterparts: Rather than offer a jobs plan, the conservative race analysis dog whistles that the problem is blacks wanting free stuff and without wanting to work hard.

Too many Americans routinely use stereotypes about people of color rooted in misinformation as a way of justifying institutional and structural racism.

The truth of the matter is that such thinking springs from the same well as the defense for the Confederate flag. The conservative race analysis informed Americans for years that the rebel flag was as mere part of Southern heritage, while feigning ignorance about its roots in black oppression and white supremacy. These perspectives have been normalized in American popular discourse on race to the point of being accepted by many Americas as common sense. This is American "racecraft," and reinforces obstacles to blacks gaining equality.

The civil rights and black power movements radically transformed the nation when it came to human rights. Yet injustices persist in education, employment, housing, income and, of course, criminal justice. All are reminders that the goals of the civil rights movement — often referenced today by those on the right as a bygone era — remain unfulfilled.

In the five decades since major civil rights legislation, the conservative race analysis has not only become increasingly emboldened, but has also become entrenched and reinforced in legislation at local, state and national levels. Rife with excuses for institutional and structural racism, it remains one of the most tenacious obstacles to full citizenship for black Americans.

Thankfully, a bold new generation of young activists, in tandem with the ongoing work of well-established civil rights organizations and public intellectuals, insist the time for change is now. Through protests and community mobilization efforts like #Justice4Trayvon, #Justice4RenishaMcBride and #Justice4FreddieGray, and organizations like Millennial Activists United, Lost Voices, Leaders of a Beautiful Struggle and Bmore United, they have begun to directly confront what President Barack Obama, in response to the Baltimore uprising, called "business as usual."

Their efforts have begun to change the national discourse on race. Count the ground shift in national sentiment about the Confederate flag among their victories. Yes, the tragic mass shooting deaths of nine churchgoers at a South Carolina church connected the dots for many between the flag and the white supremacist rhetoric Dylann Roof spouted. But how often had we previously seen that line drawn with no response? The youth protests from Ferguson to Baltimore and their race analysis via #BlackLivesMatter and beyond helped change the equation.

In this way and more, a new generation's unwillingness to back down on the issue of state-sanctioned executions of unarmed young blacks in America's streets by police may be the catalyst for a giant step in social change not seen the U.S. in the last half-century.

Grassroots organizations with solutions to the problems that plague black communities have for too long been ignored. Until now, they have been casualties of an out-of-date racial politics. But the political winds are blowing. And those concerned about a meaningful future for this nation should join their efforts to turn the corner on race. It is prime time for a new way forward.