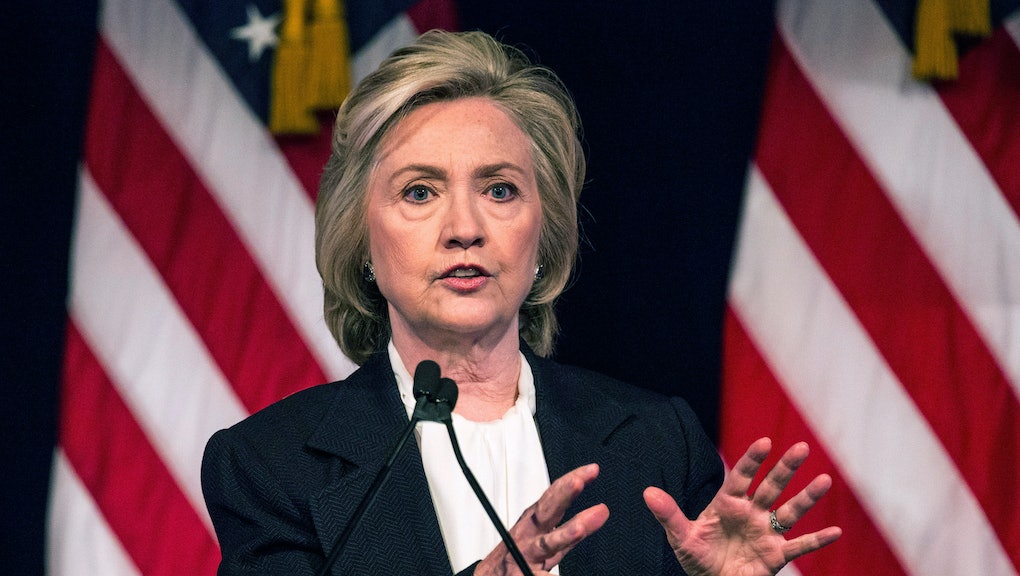 In a major economic policy speech on Monday, Hillary Clinton defined stagnant middle class wages as the foremost problem facing the modern American economy, and laid out a broad plan for achieving inclusive growth to remedy it.

"The defining economic challenge of our time is clear: We must raise incomes for hard-working Americans," she said at a speech at the New School in New York City.

Over the course of the speech, the former secretary of state called out three of the most influential establishment Republican presidential hopefuls by name. She lambasted former Florida Gov. Jeb Bush for his garbled remarks on how American workers "need to work longer hours" last week — a statement he later said was misunderstood, but was widely interpreted as a window into a misguided understanding of trends in worker compensation. She also criticized Sen. Marco Rubio (R-Fl.) for his interest in providing wealthy Americans with tax breaks and Wisconsin Gov. Scott Walker for his long-standing animosity for unions.

Clinton strived to thread the needle in her discussion of "fair growth," attempting to attend to widespread concerns that the economy has been rigged in favor of the wealthy and powerful, while expressing a commitment to a business-friendly climate of growth and "clear-eyed capitalism."

Undoubtedly, Democratic contender Sen. Bernie Sanders (I-Vt.) was on her mind. The democratic socialist has drawn enormous media attention, big crowds and strong polling numbers in early primary states by fervently lobbying for massive wealth redistribution. Former Maryland Gov. Martin O'Malley hasn't gained much traction in the polls, but he's also contributed to the leftward drift of the primary competition through his aggressive rhetoric on regulating and policing Wall Street and debt-free college. Clinton can't afford to ignore their ideas despite her strong lead in the polls — hence her address on Monday laying out her economic vision.

The plan: One of the main themes of Clinton's policy speech centered on spurring economic growth through public and private investment and reshaping the American workforce. She called for increasing investment in infrastructure and clean energy to "make America the world's clean energy superpower."

Clinton assigned a great deal of weight to the idea of a bigger and more diverse workforce. She lamented the United States' decline in global rankings for the percentage of women in its workforce, and discussed how comprehensive immigration reform was crucial for drawing undocumented immigrants into the formal economy and boosting productivity.

Another theme of her speech was elevating the welfare of typical American workers. She discussed a wide range of ideas, including boosting overtime pay, cracking down on wage theft, equal pay for women and controlling health care costs.

One of her focal points was on providing families with sick days, child care and family leave. "It's time to recognize that quality, affordable childcare is not a luxury – it's a growth strategy," she said.

One of the most striking points of the speech was her mention of profit sharing.  "Hard-working Americans deserve to benefit from the record corporate earnings they help produce. So I will propose ways to encourage companies to share profits with their employees," she said. She offered little in the way of details, but promised to explain more in the coming weeks.

Clinton also discussed reforming the tax code, explaining "those at the top have to pay their fair share." She said she supported closing tax loopholes for the wealthy and backed the Buffet rule, a proposal to increase the minimum tax rate on households making over $1 million a year. She also called for reforming capital gains taxes, the profits made while selling capital assets such as shares.

Clinton also made some measured remarks on the need to reform Wall Street, saying that the government needs "to go beyond Dodd-Frank" on financial regulation and that "too-big-to-fail is still too big a problem." The more surprising parts of her thoughts on the matter were her call for moving beyond settlements with big banks when they commit wrongdoing and a pledge to "prosecute individuals as well as firms when they commit fraud or other criminal wrongdoing."

The reaction: Her speech elicited a warmly positive response from some left-leaning advocacy outfits.

"There were notable overtures to the Elizabeth Warren wing of American politics, and nothing major for the dwindling [Democratic Leadership Council] corporate crowd — which shows that Clinton sees a rising economic populist tide in our politics and wants to be part of it," Adam Green of the Progressive Change Campaign Committee, said in a statement emailed to reporters. "Hillary Clinton made news by calling out the criminal behavior of Wall Street banks for the first time and acknowledging that corporate criminals often escape accountability while pocketing ill-gotten gains — all of which hurts everyday families."

Clinton's speech wasn't heavy on the policy details, but she nailed down some major themes for her campaign, and she's expected to roll out specific proposals in the coming weeks.