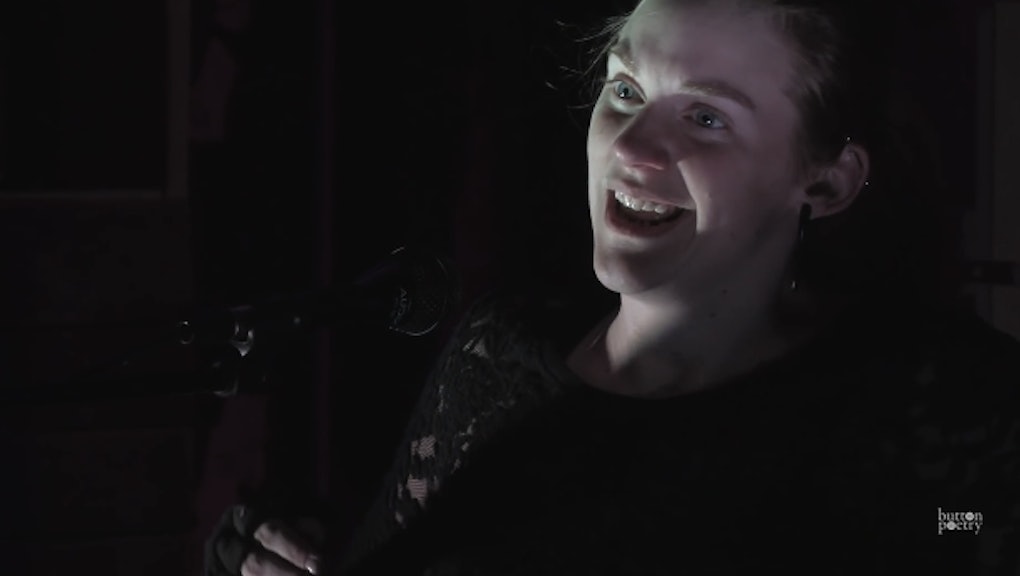 Able-bodied people commonly believe they have the right to question people with disabilities about their experiences — even the most intimate ones. Poet Kelsey Warren is no stranger to this phenomenon, and chose to tackle it head on in a recent performance at Button Poetry's 2015 Women of the World poetry slam.

"I get a lot of questions from strangers who think that because my wheelchair puts me at a lower height, the wall surrounding my personal life must be lower, too," Warren observes during her performance. But while she normally responds to such intrusive questions with the biting sarcasm they deserve, she was once asked a question she just "couldn't shake off and I couldn't exactly laugh at."

"So do you, like, let your partner have a side relationship so they can have normal sex every once in a while?" Warren recalls somebody once asking.

Warren's response is one that surely forced this ignorant individual to rethink their insulting assumption for good.

"Honey, if they're with me, they're not looking for normal — and I don't mean because I'm crippled," Warren recalls retorting. "Because sex with me can mean any fetish, any request you've always been afraid to make, any position you can think of ... Because sex with me can be role-playing that I'm your dollar menu prostitute, or an overly helpful receptionist at the sperm bank, or the woman you came out to who teaches you what sex with another woman can really be like. Because sex with me is never normal."

The question, which insinuates that people with disabilities are conditionally desirable and can only provide an 'abnormal' sexual experience is not not just insulting, Warren notes, but inaccurate.

"Cripple copulation may be slightly more complicated, but it is always climactic," she assures. "Not once has someone I've had sex with said my sex was less than."

This is about self-worth: The question is far more problematic than even this insulting misconception, she adds. It also reveals our society's narrow definition of which bodies are considered worthy or desirable more generally.

"Do I let my partner out of this pair because of my body? This body wasn't made to meet your definition of desirable," she observes. "This body doesn't exist to be taken or left. This body is broken, but it is beautiful. This body knows how to take care of me."

The question further reveals how all individuals' self-worth has destructively become synonymous with this narrow definition of desirability, which is largely based on aesthetics alone — no matter if one's body is differently abled or not.

"This body is a permanent reminder of what happens when your self-worth is based on sex so you sleep with men who don't respect your body, and women who only want you for your body, and depression overwhelms your body," Warren concludes. "My body will not be denied its worth. My body will keep doing the job of being my body. Perfect."

This hits home: Warren's poem doesn't just offer insight into what able-bodied individuals get wrong about the sexuality of those with disabilities, but also offers crucial representation for people with disabilities themselves.

Thanks to Warren's powerful words — and the contributions of other individuals with disabilities speaking about their sexuality — not only will able-bodied individuals hopefully begin to discard such harmful assumptions about others' sexualities, but those with disabilities will further feel generally acknowledged as the sexual, whole human beings they are.