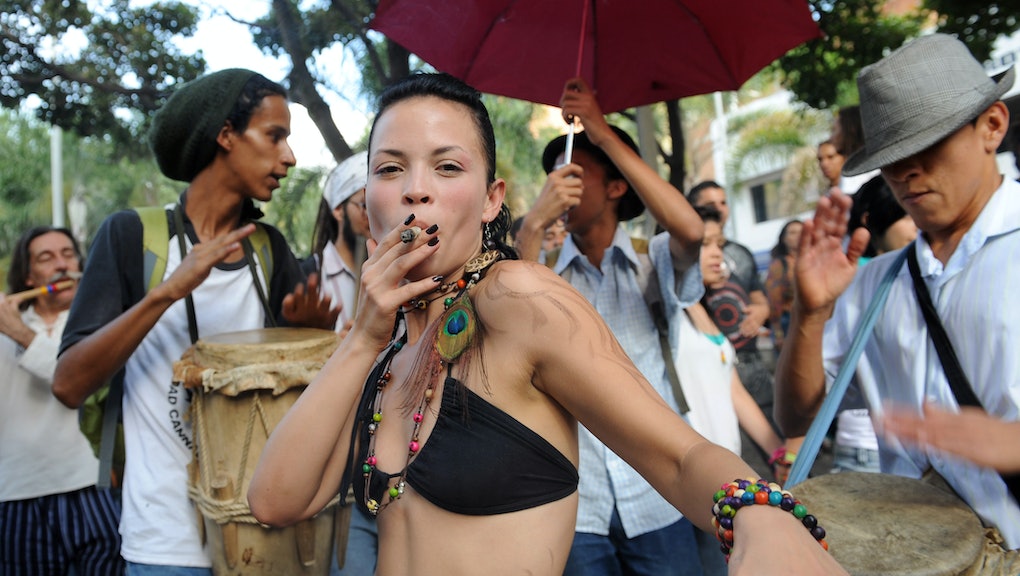 The lady stoner has been enjoying a cultural moment of late.

Rihanna extolled the virtues of ganja on Instagram. Abbi and Ilana devised inventive marijuana storage methods on Broad City. Women are louder and prouder about their weed-smoking habits than ever, even though getting stoned has been dubbed a traditionally male pursuit.

But while popular culture might make you think it's never been cooler to smoke weed while having a vagina, there's still a huge stoner gender gap. According to a 2012 National Survey on Drug Use, almost twice as many men smoke weed than women, even though there are legitimate health benefits for women who partake in the occasional (or more than occasional) toke.

So ladies, crank up the Sublime because here are nine reasons why you should be smoking more weed.

1. Smoking weed can help alleviate the symptoms of PMS.

Having a menstrual cycle is one of the best parts of being a woman, if you enjoy feeling like someone is grabbing your uterus and slowly and methodically wringing it like a wet dish towel. Fortunately, there's a more natural alternative to Midol for alleviating horrific period cramps: Tetrahydrocannibol (THC), the main compound in marijuana, has been found to alleviate nausea, bloating and headaches, all symptoms associated with premenstrual pain.

For the 10% of women who suffer from debilitating dysmenorrhea — cramps so painful that they interfere with daily life functioning — smoking pot can be a natural (and some say more effective) alternative to prescription medication.

"I was prescribed 500 mg of naproxen (basically extra-strength Aleve) for cramps, and found that weed was way more effective," Alexandra*, 25, told Mic. "I definitely smoke when I get my period. It helps a ton with the crazy cramps and headaches I get since I've been off the pill."

According to data from the Anxiety and Depression Association of America, women are twice as likely to suffer from generalized anxiety disorder as men. So it makes sense that women would be self-medicating to treat their anxiety by smoking weed. In fact, a 2013 study in Trends in Pharmalogical Sciences showed that the most common self-reported reason for using cannabis is "rooted in its ability to reduce feelings of stress, tension, and anxiety." A 2014 study from Vanderbilt University confirms that smoking weed can actually alleviate symptoms of anxiety: Researchers identified cannibanoid receptors in the amygdala, the area of the brain that regulates anxiety and the fight-or-flight response.

While there's no hard data as to whether more women than men are smoking weed to manage anxiety, Leah, 29, says she started smoking weed precisely for that reason: "It's the only way I can turn my brain off, stop worrying and just relax for a little while," she told Mic.

3. It can help cure insomnia.

If you've taken a few hits on your bong and woken up hours later having passed out in front of Telemundo, you know that weed has soporific qualities, to say the least. But if you're one of the 63% of women who suffer from insomnia (as opposed to roughly 54% of men), taking a few puffs before bedtime can be nothing short of a godsend.

"I tend to have trouble staying asleep, and I've actually noticed it getting worse with age," Elena*, 26, told Mic, adding that this issue is particularly common with women. "If I don't smoke weed, I wake up regularly throughout the night, and can rarely sleep soundly past 5 a.m."

"[Smoking weed] has helped me with chronic insomnia, anxiety [and] depression. It helped me stop using Ambien," Sarah*, 23, told Mic. And there's one added benefit: "Also, it fucks me up."

4. It can do wonders for your sex life.

Sex therapist Ian Kerner says the reported aphrodisiac effects of smoking pot before sex likely have a lot to do with the fact that marijuana decreases anxiety and lowers inhibitions, causing women to let their guards down during sex. "Studies have shows that during arousal and orgasm, parts of the female brain [associated] with high anxiety and stress deactivate, and many women I know smoke marijuana to help with this process of mental deactivation," he told Mic.

As for marijuana increasing the strength of orgasm, Kerner says there's some scientific basis for this claim. "Sometimes when couples smoke marijuana, they take more time to have a fuller sensual experience and slow down, which would allow more time for vasocongestion (blood flow to genitals) and myotonia (muscular tension)," he told Mic, causing couples to feel "relaxed, comfortable and sexy, [which may] lead to a higher quality of orgasm."

Leah says weed doesn't only improve the quality of her sex life, it increases her libido as well. After she went on hormonal birth control years ago, her sex drive totally disappeared, causing tension between her and her boyfriend. That changed, however, when she started regularly smoking marijuana. "My sex life and possibly my relationship would be in shambles if it weren't for weed," she told Mic.

5. It's easier for women to get stoned than men.

According to a study from Washington State University that examined the effects of marijuana on female versus male rats, women are much more sensitive to the effects of THC than men, particularly while they're ovulating. "What we're finding with THC is that you get a very clear spike in drug sensitivity right when the females are ovulating – right when their estrogen levels have peaked and are coming down," lead researcher Rebecca Craft said in a press release.

This is both a good thing and a bad thing. For instance, the fact that women might be more sensitive to pot doesn't necessarily bode well for those who already prone to developing negative side effects, such as anxiety or paranoia. But if you're a fan of the ganj, there's one obvious plus: If it takes less weed for you to get stoned, then it's probably cheaper as well.

6. The chemical compounds in marijuana can help treat breast cancer.

7. It can help manage weight.

Contrary to our conception of the stoner as a Cheez Doodle-munching, Ben & Jerry's-huffing, snacking machine (see above), one study has shown that people who smoke weed are actually less likely to develop conditions associated with weight gain and obesity, such as diabetes, than people who have never smoked marijuana.

In fact, the rate of obesity among people who smoke pot at least a few times a week is roughly a one-third lower than among those who've never smoked pot at all, suggesting that while it's probably not an awesome idea to swap out your diet plan for Purple Haze, it might not be a bad idea to take a few tokes before bed if you're trying to lose weight.

8. It can (maybe) help alleviate the symptoms of morning sickness.

The jury's still out as to whether or not it's kosher to take a toke while you're preggo. While one study suggests that smoking pot while pregnant increases the risk of the fetus developing cognitive impairment, there's not enough evidence to determine whether or not that's true. "There is insufficient scientific study of these areas to make any helpful commentary [about the effects of marijuana on pregnancy]," Nanette Santoro, a professor of obstetrics and gynecology at the University of Colorado School of Medicine, recently told Fusion.

That said, there's some first-person anecdotal evidence from moms suggesting that smoking weed can help relieve morning sickness. In fact, one study of young mothers in Jamaica reported that while smoking while pregnant is widely discouraged, many mothers do partake in the ganj on occasion, claiming that it helped manage their nausea and stress.

With all the social and cultural pressures women face balancing their "work selves" with their "life mes," it's often difficult for us to take a few minutes out of our busy schedules to just chill the eff out. The rise of the lady stoner probably has a lot to do with a desire to do what dudes in Judd Apatow movies have been doing for years: ignoring our responsibilities and taking a break from the harsh pressures of reality for a few minutes a day.

"A lot of girls or women think they need to be negative ... and obsessed with beauty or self-image," Amanda, 24, told Mic of the rise of the female stoner. "I think weed takes you out of that. [It] keeps you calm and not caring about the frivolous and material items and helps you to focus on the positive."

*Names have been changed to allow individuals to speak freely on private matters.