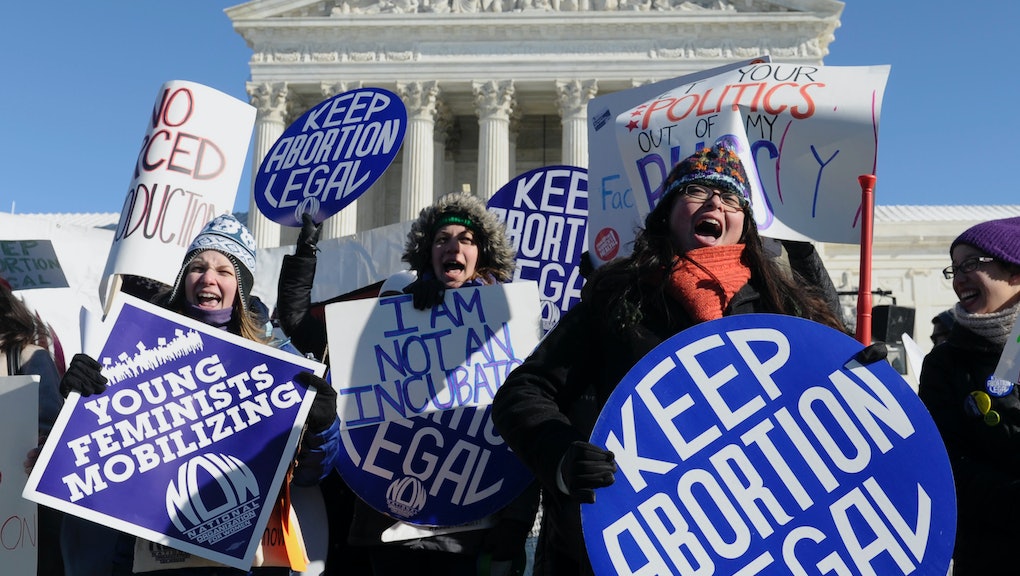 Many anti-abortion advocates argue countless women regret their abortions because of post-abortion syndrome, an alleged form of post-traumatic stress disorder which affects many women after they've terminated a pregnancy. However, according to a new study from researchers at the University of California, San Francisco, as many as 99% of respondents who underwent the procedure reported the abortion "was the right decision."

The study tracked the feelings of 667 women on the matter for three years after terminating a pregnancy. The subjects were split into women who had their abortion within the first trimester and others who did within two weeks of the latest point in the pregnancy the same clinics would allow an abortion.

"The predicted probability of reporting that abortion was the right decision was over 99% at all time points over three years," the researchers write. The point at which the pregnancy was terminated appeared to have little effect on emotional responses, as there were "no differences between women having procedures near gestational age limits versus first-trimester abortions."

Post-abortion stress syndrome. Students for Life of America, whose mission statement is "Abolish Abortion in Our Lifetime," argues that "Planned Parenthood and other abortion providers and advocates do not recognize post-abortion syndrome (PAS) as a valid condition, [but] PAS has been recognized by many psychologists and doctors."

Women who terminated pregnancies "suffered an event so stressful and so traumatic ... [they are] unable to cope with this experience in a normal manner," Students for Life argues, classifying PAS as a form of PTSD.

Hmm... However, the study, shared through the National Center for Biotechnology Information, finds "both negative and positive emotions declined over time." Furthermore, most negative feelings in the nominal number of respondents who experienced them were not, in fact, internal remorse, but the product of unsupportive environments.

"The Emotional Effects of Induced Abortion," a Planned Parenthood paper published in 2013, states that for at least 30 years, "substantive research studies have shown that legally induced abortion does not pose mental health problems for women. This finding has been reiterated in rigorous reviews of the scientific literature during the last five years."

The most recent data are further proof that protecting the right for women to have abortions is the best thing to do for those individuals. Anti-abortion advocates' logic, that they are somehow saving women from emotional distress by denying those who want an abortion, is simply incorrect. Studies such as this one paint anti-abortion advocates more as people forcing their ideology on others rather than altruistic Samaritans saving women from themselves. Ultimately, women know better what they want than anyone else. To suggest otherwise is condescending.