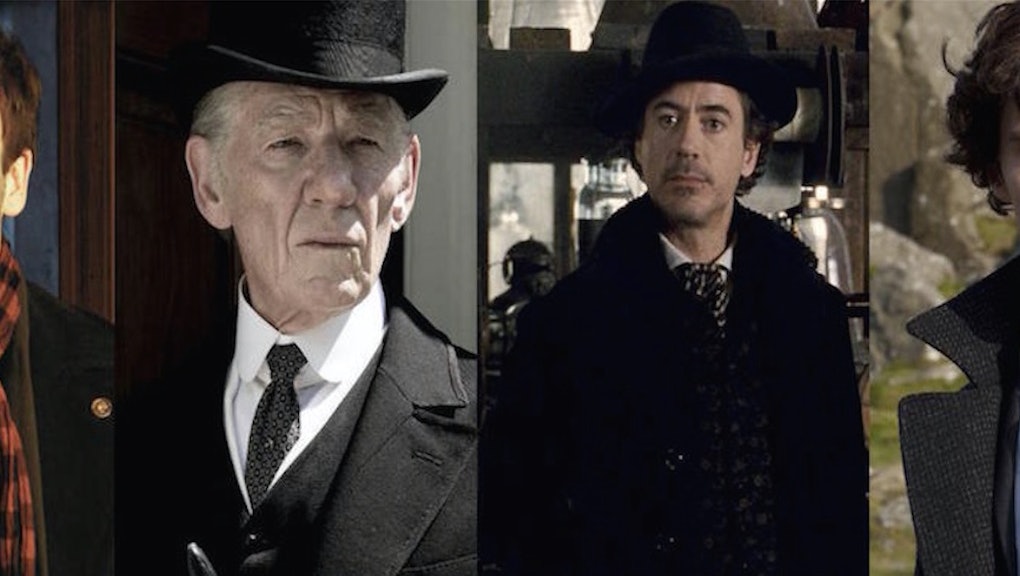 Pop culture is having a Sherlock Holmes moment.

It's been going since just before the dawn of the 2010s, when Robert Downey Jr. and Jude Law brought an action-packed take on the detective and his assistant, John Watson, to the cineplex. Shortly after, Benedict Cumberbatch's BBC and PBS series made the actor a megastar. Two years after that, Jonny Lee Miller took on a modern-day version of the role in CBS' Elementary, alongside a female Watson (Lucy Liu).

Now, Sir Ian McKellen is bringing his own version of the legendary character to the big screen — except he's not quite the legend he used to be. In Mr. Holmes, hitting theaters Friday, McKellen plays the detective well into his advanced age, unsettled in retirement. He can't remember what happened in his final case, thanks to his own creeping senility, and Watson is gone. Holmes struggles to fill in his memory gaps before his own death.

McKellen makes for a spot-on Holmes, but how does he compare to Cumberbatch, Downey and Miller? Here's how the Sherlock smackdown shakes out.

Did we really need Sherlock Holmes, the buff, shirtless action hero? These two movies did decent box office, though the sequel drew fewer moviegoers domestically than the former, never a good sign. Worse even is how ill a fit Downey is for the role. The same charm he brings to being Tony "Iron Man" Stark can't help him here. Holmes' wit is a bit sharper than Downey's snark.

Downey is threatening us with a threequel, but we hope it's just hot air. As the other three men here prove, there are far more appealing takes on Holmes than "shirtless action hero" could ever hope to offer.

Miller's former addict-turned-investigator take places Holmes in modern-day New York City. What could have been a safe, boring character on a CBS crime procedural works largely because of Miller's performance. He's a smart translation of an incredibly talented man haunted by his own demons. The show uses elements from the books in forging its plots, adding to the authenticity.

Bonus points: She may be an alternative take on the character, but Liu's Joan Watson is an incredibly effective foil for Miller's Holmes. Their rapport makes each performer stronger.

Likely to be remembered as the iconic 2010s Sherlock Holmes, Benedict Cumberbatch's performance is full of what makes the character who he is. He's clever, good at what he does and brilliant to the point of abrasiveness. What's perhaps most impressive is how the show feels completely modern and classic at once. It even nails his aversion to celebrity or fame — a note Mr. Holmes touches on as well.

Cumberbatch has become a huge star in no small part thanks to his work on Sherlock. And though he'll have other prominent credits on his career resume, this will likely always be his iconic role.

Despite how iconic Cumberbatch is in the role, there is no one better suited to it than Ian McKellen. Watching Mr. Holmes, it's hard to imagine how he's ever played any other character. He nails every mannerism and affect, from his measured but stern voice to his disdain for his popular image. He never smoked a pipe, or wore a deerstalker hat. Holmes is a very perceptive man, but that's all he is: a man. He's mortal.

McKellen nails that mortality largely because his Sherlock is facing down the end. His confusion over what happened in his last case creates a cool reverse-mystery for him to solve, in which the person lying to him isn't a suspect, but his own memory. In lesser hands, Mr. Holmes' layers of subtlety could have been lost. In McKellen's, it's a performance for the ages.