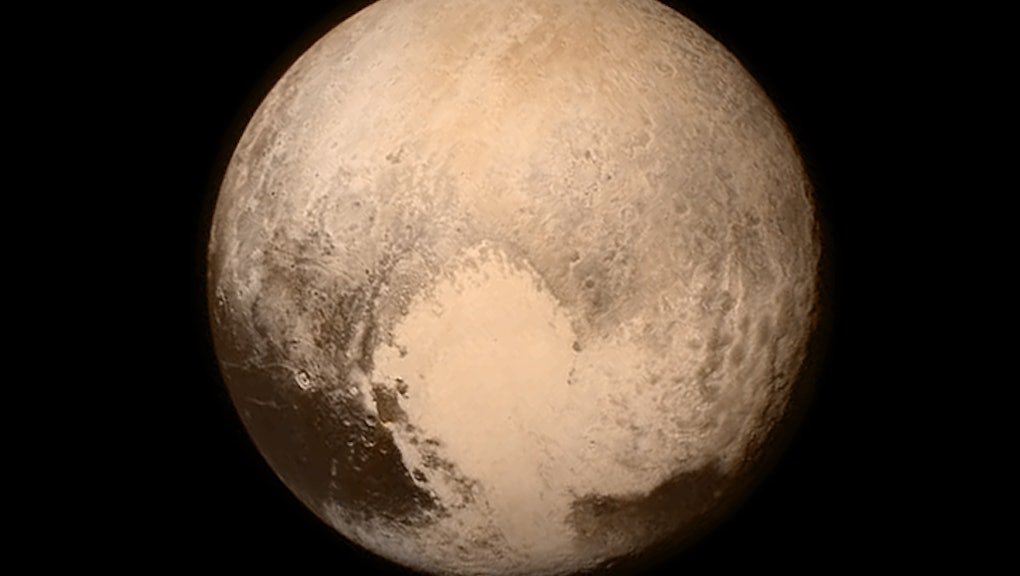 NASA Just Released the Most Detailed Image of Pluto Ever Seen

NASA's New Horizons spacecraft flew by Pluto at 7:49 a.m. Tuesday, but an hour earlier, it released a sneak peek: this gorgeous shot of the dwarf planet's surface, posted exclusively to Instagram, showing Pluto's red color and heart shape in greater detail than ever.

And here is the full-sized image NASA posted shortly thereafter:

NASA's New Horizons spacecraft left Earth in January 2006 on a mission to document and map Pluto and its largest moon, Charon. What's especially cool here is how New Horizons got so deep into the galaxy: They pulled an Armageddon. According to NASA, when New Horizons passed by Jupiter in 2007, it used the gas giant's gravity to "slingshot" itself out into the deep edges of the solar system, flying at over 50,000 mph — a 9,000 mile-per-hour boost from its original speed.

In the course of the nine-year mission, researchers have finally gotten to see real evidence of what they've known for years: Pluto, contrary to its pop-culture implications as a grayish, dark planet, is more of a reddish brown, getting it nicknamed "the other red planet." The color, instead of being caused by iron oxide, or rust, like in the case of Mars, NASA scientists believe the bright hue is from "hydrocarbon molecules that are formed when cosmic rays and solar ultraviolet light interact with methane in Pluto's atmosphere and on its surface."

More recently, NASA discovered what can best be described as celestially adorable: Toward the bottom of the planet, there's a heart-shaped bright zone that measures roughly 1,200 miles across. And as New Horizons gets closer and the images become clearer, we're able to see the shape in all of its stunning, lonely beauty — a mysterious body just waiting to be discovered.

Thanks to instruments aboard New Horizons, NASA was later able to post a compositional image of Pluto and its moon Charon in exaggerated color to show the diversity on the two bodies' surfaces. Keep in mind these aren't the actual colors. According to NASA, it's a way to show the differences in "surface material and features."