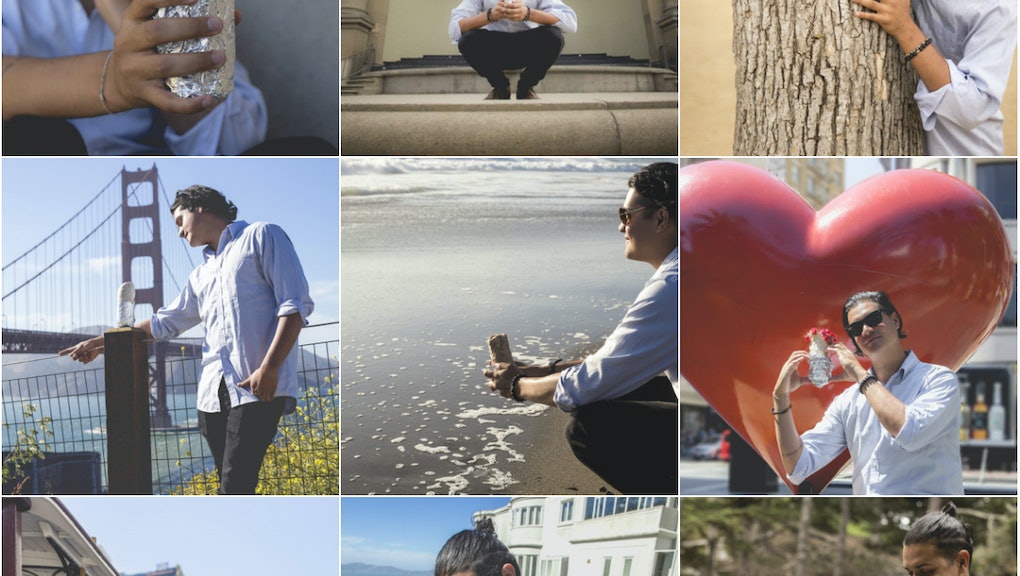 If we're being honest, plenty of us have been in a serious relationship with Chipotle at one time or another. Who doesn't love curling up with a half-steak-half-chicken with pico, cheese and guacamole at the end of a stressful workday? No one, that's who.

But even the most ardent Mexican food lovers have nothing on this dude from San Francisco, who recently took his love of burritos to a whole new level by getting "engaged" to one.

Warning: There are photos involved, and they will make you very hungry.

The flood of happy couples: David Sikorski, a 28-year-old writer living in San Francisco, staged the tongue-in-cheek photo shoot with his photographer friend Kristina Bakrevski as a response to the familiar, ever-so-obnoxious deluge of engagement and wedding pics our happiest couple friends love to post on Instagram and Facebook.

"Before social media, I feel like the only people that would remind you that you eventually need to settle down would be your in-laws or your grandmother during the holidays," he told Mic. "My Facebook has just been riddled with images of engagement, marriage and baby photos every day."

Taking a cue from that one time a single Carrie Bradshaw registered herself for a wedding present at Manolo Blahnik, Sikorski decided to call up Bakrevski to help him proclaim his love (of burritos) to the world.

"Once I explained that I wanted to get those staged engagement photos done, but with my true love, a burrito, she volunteered and came right over," he said.

Thus began Sikorski's heartwarming journey through San Francisco with a carne asada special. (Sikorski told BuzzFeed that during the shoot, he got hungry and a second burrito was brought in as a replacement.)

Food is love:  Sikorski is not the first person to note that during dating droughts, food often serves as a stand-in for the intimacy and support we crave. (He's also not the first person to publicly declare his love for an inanimate object on social media, if this woman's Instagram relationship with her Jansport backpack is any indication.) While emotional dependency on food can be a legitimate issue for some folks, there's a long-standing joke on social media about "dating" your favorite comfort foods, from burritos to ice cream to macaroni and cheese.

And who could forget when Julia Roberts found a meaningful connection with her pizza in Eat, Pray, Love?

That Sikorsky felt compelled to double down on this familiar expression by going straight-up engagement photo deluxe package on it is pretty entertaining — and he's quick to note that he's not taking the whole thing very seriously.

"It's all in good fun, of course, and I adore my friends who have found true love," he told Mic. "The only difference is some people are looking to get married and I'm perfectly okay with just enjoying a good burrito."