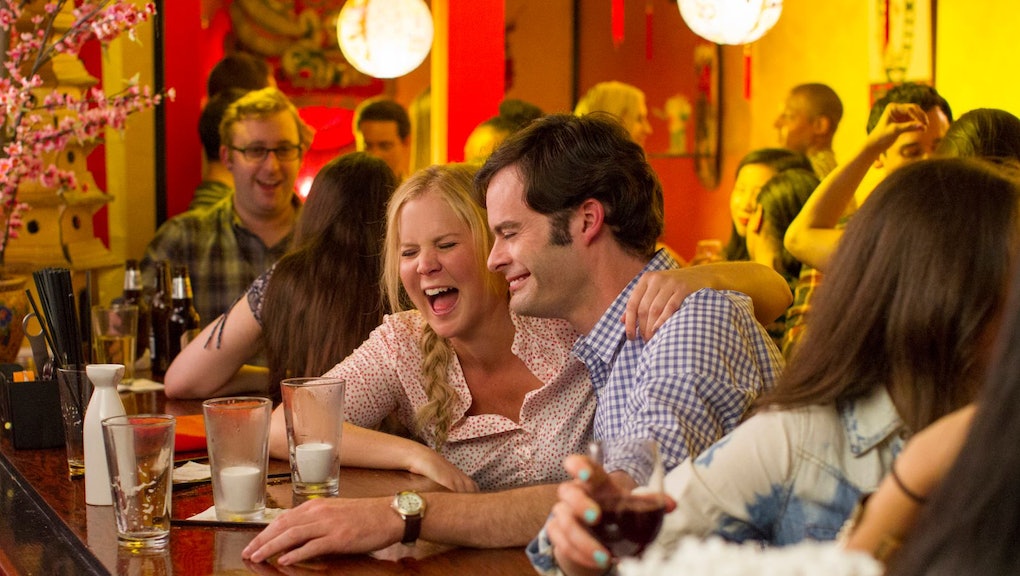 Amy Schumer is everywhere. Clips from her hit Comedy Central show Inside Amy Schumer are almost guaranteed to go viral every week, as Schumer fires shots at the ageism that plagues Hollywood or cleverly detects the subtle misogyny hidden in boyband anthems.

It's no surprise, then, that when she penned the lead character for her upcoming feature film Trainwreck, her own biting wit set the foundation for one of the most dynamic female characters in comedy. Amy — Schumer's character in the film, with whom she shares a name — adds a much-needed voice into the female comedy sphere: that of the modern, sexually aggressive everywoman.

Female-driven comedies and sex go hand in hand. Whether they are writing progressive, intelligent jokes or delivering lines that play into the male fantasy of a quirky girl, women get the biggest laughs when they break the social taboo of talking about sex. Though much of Trainwreck's story revolves around Amy's sex life, it does not demonize her like so many other mainstream comedies do.

Take, for example, 2011's What's Your Number? That film focuses on Anna Faris' Ally Darling, who has recently been made aware that women who've had over 20 partners have a harder time finding husbands. Generally regarded as a disaster, the main character is driven by shame and guilt and the worse fate a woman could behold: being without a man.

Whereas What's Your Number? is steeped in regret for one's choices, Trainwreck validates them. Amy is not looking to change, openly talking about her unpopular philosophy and trysts.

Amy is a writer who adopted the credo "Monogamy isn't realistic" long before she knew what it meant. Despite the judgments of her friends, Amy stands up for the millions of women out there who would rather hit it and quit it after a long day at work than bring in the complicated emotions and compromises of a relationship. Her life is unapologetically messy, and she chooses to keep it that way.

Her mess of a life isn't bad. Every woman should experience that type of freedom for a time — a life dedicated to your own appetites and desires. But Amy's mess isn't good, either. The character uses her free spirit façade as a way to avoid her own shortcomings. She's forced to confront those failings when she becomes romantically interested in nice guy sports physician Aaron, played by Bill Hader.

When looking at male-driven comedies — or, simply, comedies — over the past decade, there are dozens whose primary motivating story is about getting a dude laid. Teenagers can get laid. Forty-year-olds are getting laid. The Casanova trope links male sexuality with pride and prowess.

Schumer offers us the gender-flipped side of this story, which will become more and more common among younger women as they continue to break down the lies society tells them about sex. To see a story like this depicted in a major studio comedy is, quite frankly, incredible.

'Trainwreck' adds a much-needed voice into the female comedy sphere: that of the modern, sexually aggressive everywoman.

Trainwreck gives a voice to young women who choose to wield their sexuality like a weapon and refuse to prescribe to the idea that pleasure belongs to men. Amy is like a missing piece in the world of female comedies come to finally finish the puzzle. In the movie, as with her comedy, Schumer subverts our expectations and opens the door for a powerful new type of raunchy comedy for women.

Whether or not the movie will hit the mark with audiences will be decided after its Friday release. But frankly, that's beside the point. The true triumph of Trainwreck is its daring choice to represent an alternative to the unstable manic pixie dream girl, or the dysfunctional slut. Schumer brings us a woman who lives the life she wants, and lives it well, like so many real women do.

To put it bluntly: Sorry, but she's not sorry. Hopefully, with the dawning of this new type of comedy, there will be a whole generation of women who learn to stop apologizing for the notches in their bedpost and trade in their guilt for an uninhibited good time.