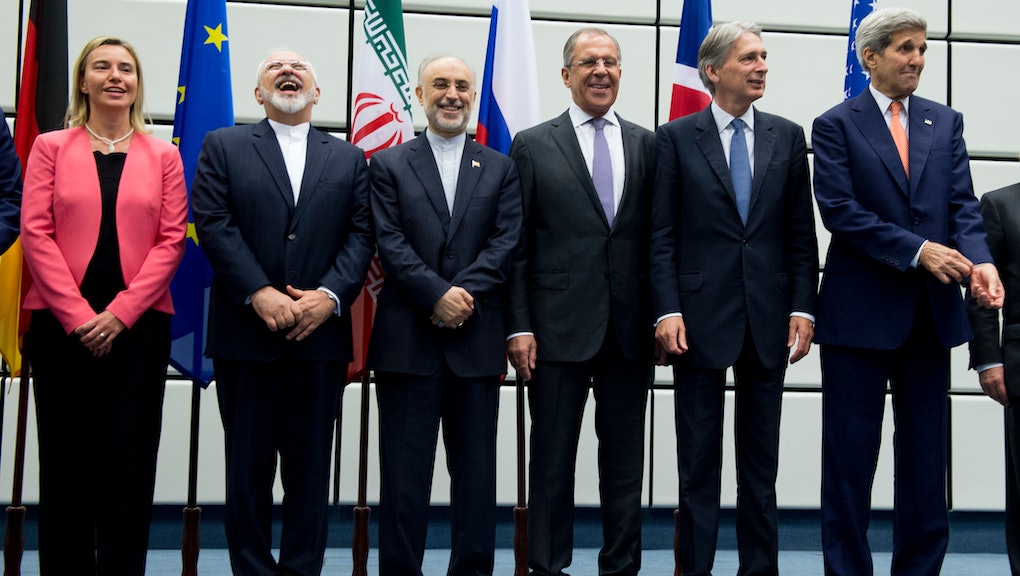 Bright and early Tuesday morning, President Barack Obama announced the United States and world powers had struck a long-awaited deal with Iran that would rein in its capacity to build a nuclear weapon. The landmark agreement doesn't foreclose the opportunity that Iran could ever develop nuclear weapons, but the oversight measures it puts in place make it extremely difficult for the country to do so for the next 15 to 20 years.

The diplomatic breakthrough — the product of 20 months of negotiations — has not been well-received in all quarters. Republicans are convinced that the deal, which institutes rigorous monitoring and centrifuge reduction in exchange for lifting sanctions on the isolated Middle Eastern nation, represents nothing less than total capitulation to an enemy state. GOP party leaders and presidential contenders quickly unleashed a torrent of criticism of the deal:

So what exactly do Republicans want? Much like with their ire against Obamacare, Iran has become an issue that allows conservative politicians to rail against ambitious attempts to solve massive conundrums without providing a viable alternative. More sanctions? So far sanctions have failed to thwart Iran's thirst for nuclear power, and allies of the United States would likely falter in their commitment to them after it walked away from a decent deal. A strike on Iran's nuclear weapons, or a full-fledged war? That would be catastrophic for the region, and would likely backfire.

No, the Republicans aren't raging against the deal as much as they're raging against something far bigger: The fact that the U.S. can't do exactly as it wants in the Middle East.

The Atlantic's Peter Beinart has some sharp observations on this dynamic:

When critics focus incessantly on the gap between the present deal and a perfect one, what they're really doing is blaming Obama for the fact that the United States is not omnipotent. This isn't surprising given that American omnipotence is the guiding assumption behind contemporary Republican foreign policy. Ask any GOP presidential candidate except Rand Paul what they propose doing about any global hotspot and their answer is the same: be tougher.

While Republicans are claiming the deal is weak, the main worry that animates them isn't anxiety about a nuclear Iran, which is a far-fetched possibility for quite some time under the current deal's terms. It's anxiety that the U.S. could be seen as conceding in any manner to a much smaller and weaker country.

On Iran, the Obama administration departed from the Bush administration's pursuit of foreign policy goals through preventive warfare. It determined that the U.S. needed to work with the international community to solve global problems and not rely on brute force.

But Republicans are bent on denying that reality as long as possible. Presidential candidates like Wisconsin Gov. Scott Walker have actively sought to make it a policy battleground for 2016. And their opposition to a deal isn't an empty threat. The next president could torpedo the agreement by re-instituting sanctions.

The GOP is publicly claiming that this deal is dangerous to the U.S. and its allies. But the real danger is to public perception of American power — the possibility that the U.S. negotiates terms rather than dictates them. The problem they'd never admit publicly is that chest-thumping and militarism can't solve every foreign policy challenge. And in recent history it has made most of them far worse.