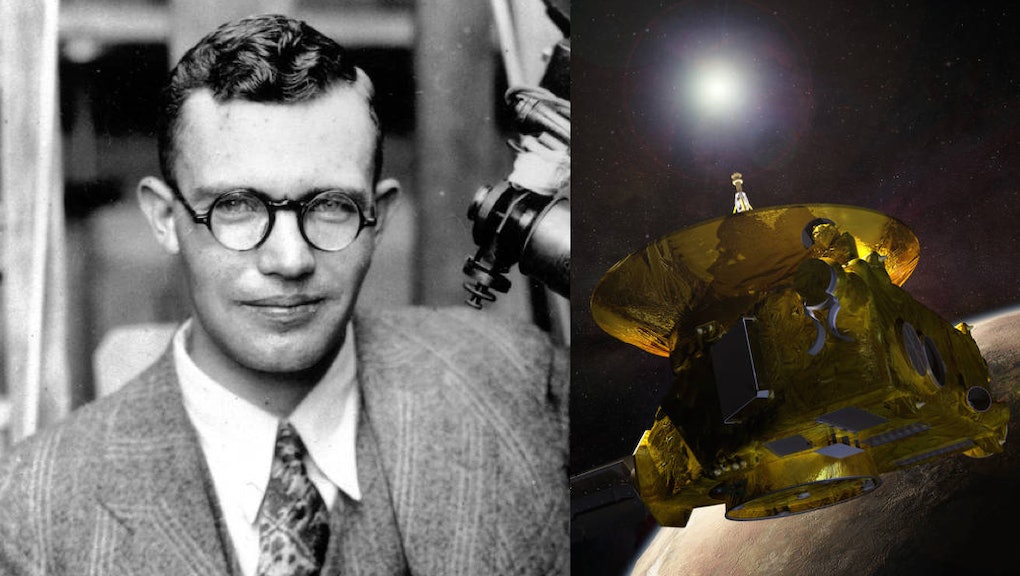 On Tuesday, at approximately 7:50 a.m. Eastern Daylight Time, NASA's New Horizons spacecraft made its closest approach to Pluto. As the first expedition to make it all the way to the dwarf planet — and, eventually, beyond — the mission marks an extraordinary moment in space travel.

Besides an arsenal of scientific equipment used to send information back to Earth, New Horizons also houses an assortment of slightly unusual items, including a compact disc containing the names of over 430,000 Earth dwellers.

That, and an ounce of the ashes of the astronomer who discovered Pluto.

Tombaugh made the incredible sighting on Feb. 18, 1930, when he was just 24 years old. Raised on a farm in Kansas, his plans to go to college were thwarted after a hailstorm wreaked havoc on his family's farm. Instead, he learned the ropes of astronomy by himself, building his first telescope at the age of 20. He perfected the design, even fashioning the lenses and mirrors himself.

After Tombaugh sent his drawings of Mars and Jupiter to the Lowell Observatory in Flagstaff, Arizona, the astronomers there asked him to work with them. Little did they know how important that decision would become.

"When Tombaugh looked at Pluto, it was just a speck of light," said his daughter Annette.

The discovery: Tombaugh was assigned the job of using the observatory's new photographic telescope to look for what Percival Lowell, another American astronomer, called "Planet X." An unknown celestial body was throwing off the movements of both Neptune and Uranus, and researchers were at a loss to explain what was happening. "Planet X," they theorized, was the source.

Tombaugh threw himself into the task. According to the Johns Hopkins University Applied Physics Laboratory, which worked with NASA to make the New Horizons mission happen, Tombaugh "photographed two-thirds of the sky and spent thousands of hours examining millions of star images."

Using a tool called a blink compactor, Tombaugh compared photos of the same sky taken on different days. As Space.com explained of the blink compactor's usefulness, "Stars and galaxies essentially remained unmoving in the images, but anything closer could be visually identified by its motion across the sky."

On Feb. 18, 1930, he identified a discrepancy in two images taken the previous month. It was a tiny orb, and it had moved positions. After studying the object, the staff realized Planet X — Pluto — had been found.

The name: Tombaugh didn't name Pluto, however. That honor went to Venetia Burney, an 11-year-old girl whose grandfather, Falconer Madan, was the "retired head Librarian of the Bodleian Library at the University of Oxford," according to Mental Floss:

"Venetia was well familiar with Greek and Roman mythology, and further had recently been acquainted with the planets and their relative distances from the Sun during a nature-walk lesson at school. As the family discussed what the new planet should be named, she said, 'I think Pluto would be a good name for it.' Pluto is the god of the underworld, who could make himself invisible and dwelt in a place that sunlight didn't reach. It seemed a fitting name for a dark, remote planet.

Burney didn't receive much in the way of special recognition for her contribution at first — save for a £5 note given to her by her grandfather — but now her name belongs in the history books. "I certainly was thrilled," she said in a 2006 interview with NASA. "It was very exciting for a small girl really at the time."

Though she died in 2009, she lived long enough to see Pluto's 2006 demotion from a planet to a dwarf planet. It was another Pluto, however, that bothered her more.

"People were repeatedly saying: 'Ah, she named it after Pluto the dog,'" she told the BBC in 2006. "It has now been satisfactorily proven that the dog was named after the planet, rather than the other way round. So, one is vindicated."

On Tuesday, on the backs of Tombaugh, Burney and everyone else who helped identify the odd, icy object in the outer reaches of our solar system, New Horizons — and Tombaugh's ashes — finally got a closer look.

"When he looked at Pluto, it was just a speck of light," Tombaugh's daughter Annette recently told NASA. "To actually see the planet that he had discovered and find out more about its atmosphere, find out more of what it is and actually get to see the moons of Pluto, he would have been astounded."