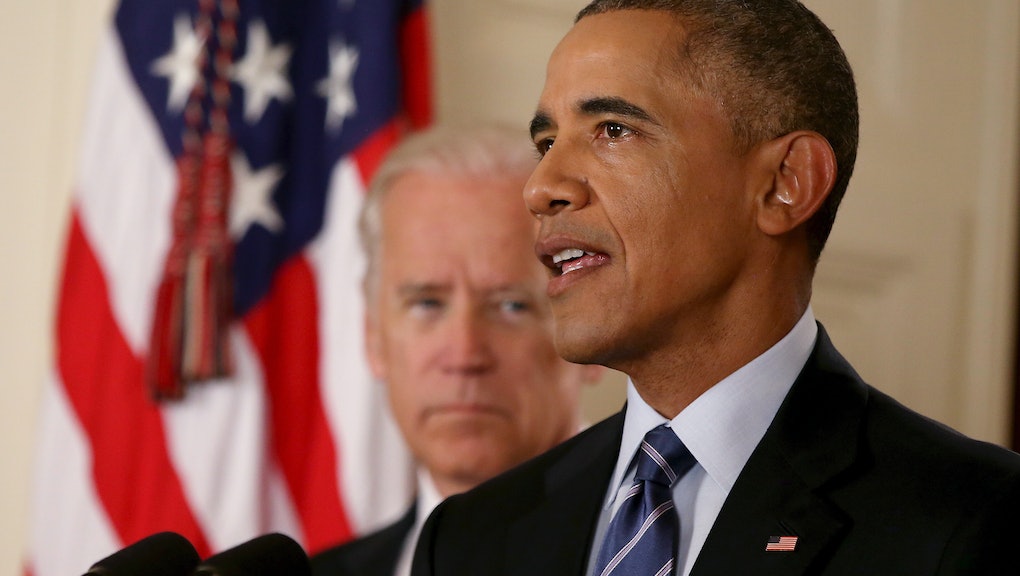 Early Tuesday morning, the United States and five world powers reached a sweeping accord with Iran to impose heavy restrictions on Tehran's nuclear program in exchange for the lifting of hundreds of million dollars in international sanctions.

Republicans and a number of Democrats with deep ties to Israel have expressed skepticism, if not outright opprobrium for a pact that, if successful, would effectively draft Iran back into the international community after more than three decades of overt and ongoing hostility.

The deal goes from Vienna to Capitol Hill now. Following a 60-day review period, the GOP-controlled Congress is expected to vote to reject it, prompting a presidential veto. Speaking from the East Room of the White House at a little after 7 a.m. Tuesday, President Barack Obama promised to strike down "any legislation that prevents the full implementation of this deal," meaning both chambers would need two-thirds majorities to kill the compromise.

Making the case: However unlikely that outcome, the White House is poised to launch a wide-ranging public relations blitz aimed at shoring up support among potential allies while beating back heavy criticism from opponents, both at home and abroad, in Congress and on Main Street.

"If I were in their shoes and I was responsible for this, I would want to win over a majority of the American people and convince them the deal is in their interest," Sen. Chris Coons (D-Del.) told the New York Times. "Who wants their legacy to be a deal that is barely approved by the narrowest of margins and is opposed by the majority of Congress?"

The White House has already begun to turn the screws. Just hours after the president's speech Tuesday, a senior administration official, seeking to adjust the terms of the debate on a background call with reporters, argued that "a vote to kill this deal would be a vote to kill the sanctions regime." With the arrangement now in place after 20 months of nearly ceaseless haggling, officials say they can no longer count on foreign allies, many of them eagerly anticipating the return of Iranian oil, to accept a return to the more expensive status quo.

For Obama, the Iran pact represents an opportunity to reverse a foreign policy legacy that had been colored by violent discord in the aftermath of the Arab Spring in the Middle East and repeated Russian aggression in Ukraine and other former Soviet states. Halting or significantly slowing Iran's march to the bomb would be an achievement in its own right, but the administration's ambitions stretch well beyond that — perhaps even into Iraq and Syria, where the U.S. is in desperate need of a powerful ally in the fight against Islamic State militants.

"It's my name on this": Despite protests from his critics, who argue that Obama's negotiating team led by Secretary of State John Kerry gave away too much in order to strike an agreement, the president seems keenly aware of who will shoulder the blame if the protocols fail.

In an interview with the Atlantic's Jeffrey Goldberg soon after the original framework deal was settled in May, Obama spelled out the stakes: "Look, 20 years from now, I'm still going to be around, God willing. If Iran has a nuclear weapon, it's my name on this," he said. "I think it's fair to say that in addition to our profound national security interests, I have a personal interest in locking this down."

Whatever Obama stands to lose personally, there is a whole lot more riding on the outcome of this deal, most of which will expire in 10 to 15 years. Failure in the form of an emboldened Iranian regime, with more money and new freedom to squeeze American interests in the region, would be a blow to the very idea of diplomacy and peaceful conflict resolution as a tool of the U.S. state.

If Iran defies or exploits the agreement and races successfully to a nuclear weapon, the deal will haunt a generation, tying the hands of any political leader who advocates for negotiation over the use of blunt force. Republican critics of the president are already calling the deal a 21st century version of "appeasement." Fairly or not, that precedent continues to cast shadows on policies, like Obama's, that count on open engagement with rational enemies.

The final chapter: The twice-elected president now begins what could be the defining campaign of his remarkable political career. He enters it with clarity. This is, after all, almost precisely what candidate Obama promised to do in 2008, when he accepted the Democratic nomination and committed to "renew the tough, direct diplomacy that can prevent Iran from obtaining nuclear weapons."

Nearly seven years later, Obama and his top aides have looked into the abyss, returning with a cautious smile and the deal they wanted.

"Negotiating with Iran is tough — very tough," a senior White House official said on Tuesday's call. "There are decades and decades and decades of mistrust. But through a very, very difficult process, we have come to know each other a little bit better."

Whether this new whisper of understanding can grow over time and deliver on its initial promise will determine more than the legacy of a single president. If these Vienna accords fail, Obama's fate will take a backseat to much more dire concerns.