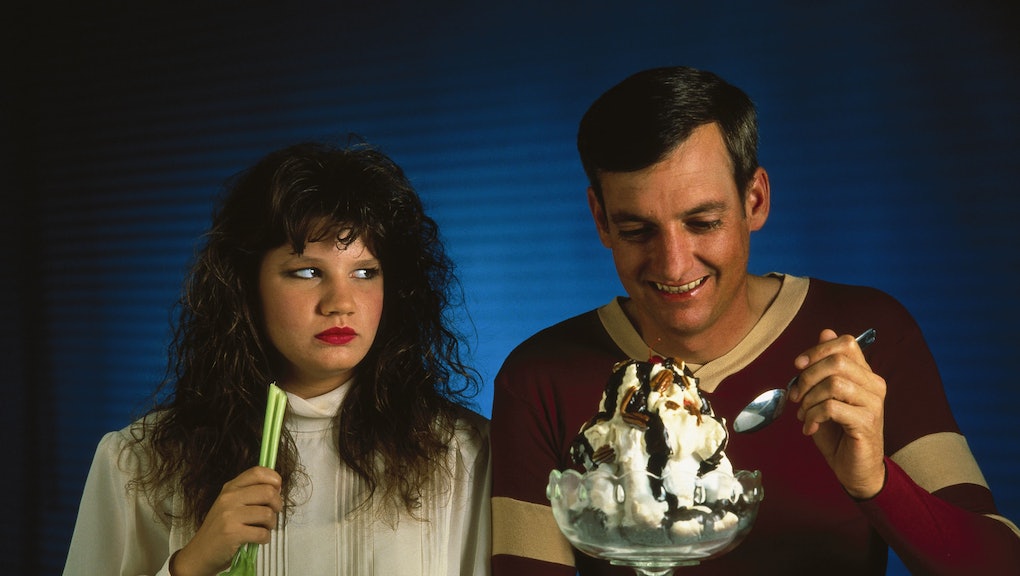 From the number of love stories on The Biggest Loser to the rise of the inspirational Instagram hashtag #CouplesTransformation, it's clear that many couples are embarking on fitness and weight loss journeys together. Some, it seems, are achieving great success, if the numerous viral stories about couples losing weight before their wedding are any indication.

But while the benefits of losing weight together have been extolled time and time again, there's one unpleasant truth about couples' weight loss that many of the success stories fail to mention:

Losing weight as a unit is not always a walk (or jog, as it were) in the park.

Mismatched metabolisms: Science has shown us that not all human beings lose weight at the same pace. Various factors contribute to how effective a diet and exercise regimen will be for any given person, including age, genetics and even gender.

"Men tend to lose weight much quicker, which is just the way it is," Gabi Rose, a weight loss and nutrition coach, told Mic. "They have more muscle mass, and muscle is what burns the calories."

Rose mentioned that she's seen these differences cause real problems for some of her clients, creating resentment or frustration between couples that lose weight at the same slow pace, despite the fact that one is downing beers and watching football while the other munches on celery sticks from the treadmill.

Beyond a mismatched metabolism, a mismatched level of enthusiasm can also be cause for strife in a relationship. If one partner is gung-ho about going on early morning workout sessions, while the other is more concerned about getting a full night's sleep and eating a full pancake breakfast, that's bound to cause some tension.

Alicia*, 26, says that when she and her boyfriend tried to get in shape by foraying into the high-intensity world of DVD workouts, that's exactly what happened. "I just got really annoyed because we did P90X and he wanted to do it every day (which is not how you're supposed to do it, especially as a beginner)," she told Mic. "And I hate exercising. So I understood why he lost weight faster, but I was resentful nonetheless."

And who could forget the episode of Friends in which Chandler and Monica tried getting fit together, only for them to realize that their energy levels were completely out of sync?

Are you cheating on me? While many a relationship has been destroyed by one partner's literal cheating, one wonders how many others have been tested by a form of cheating that has less to do with condoms and more to do with calories. After all, in a couple's weight loss journey, there's not one but two appetites to worry about — and they may not always meet in the middle.

"Sometimes if my craving is strong, I'll have a milkshake and just not tell him," one 28-year-old dieter told Mic of his tendency to hide private moments of indulgence from his boyfriend, so as not to destroy morale in their shared fitness plan. "Because I know that if he told me he had a milkshake, I'd yell at him."

Body image is already fragile. Perhaps the most challenging thing about embarking on a weight loss journey together is that, for some couples, it can bring up existing body image issues and can potentially make them worse.

"Couldn't he just be more disciplined, like me, the woman who had starved and sweated her body into compliance?" asked Chloe Angyal in a recent essay for BuzzFeed, where she wrote about the experience of projecting her own body image issues onto her boyfriend as they tried to lose weight together. She later asked, "[He] loved me, wanted me, at this weight. I would have been devastated if he didn't. Why couldn't I do the same for him?"

Rose also confirmed that she's seen similar issues creep up for some couples after a failed weight loss journey. "One partner can start to feel insecure," she said. "Almost as if the other's newfound confidence is threatening to the relationship."

While not all couples' attempts to lose weight wade into such treacherous waters, such stories are a reminder that embarking on a fitness journey with a partner should be done with care and compassion. Above all else, losing weight together is definitely not a competition. "Not everybody has the same goal," said Rose.

Keeping it positive: Potential risks aside, however, for many couples, weight loss and fitness can be just the shared interests they need to strengthen their relationship — particularly when both partners are on the same page about their goals.

Avoiding unhealthy competition and acknowledging and accepting each other's genetic differences are probably good places to start in making sure things stay harmonious. If all those happy Biggest Loser couples can teach us anything, it's that the focus should always be on supporting one another.

"It brought us much closer," Amy*, 27, told Mic of her and her husband's decision to hit the gym together. "We were encouraging each other when the other was ready to give up."