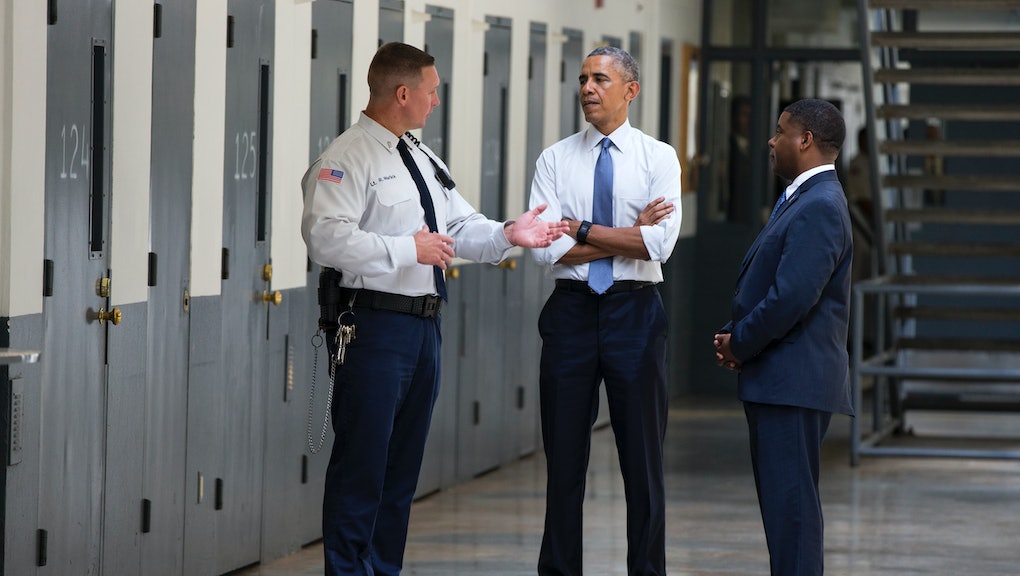 Over the last year, as the media and a national protest movement have darted from one city to another documenting the deaths unarmed black people at the hands of the police, President Barack Obama has usually remained reserved in his rhetoric. He responded to the chaos in Ferguson after the death of Michael Brown in a restrained, professorial style. He chose not to go to Ferguson, Baltimore, Staten Island or Cleveland after uproars over killings in those communities. In this year's State of the Union, he carefully avoided taking sides between the police and black communities.

Obama's reluctance to be forceful when publicly addressing police violence and the related system of mass incarceration was real, but lately there have been signs that he's interested in addressing structural issues in the United States' criminal justice system. Just this week, Obama has given a powerful, policy-laden speech to the NAACP and commuted the sentences of 46 drug offenders. On Thursday, he became the first sitting president to visit a federal prison when he toured a complex in Oklahoma.

The shift, while largely symbolic, carries the weight of the presidency and could translate into real, actionable policy solutions, many of which Obama has been discussing this week. The president has not just abstractly committed to condemning racism and a broken criminal justice system — he has laid out concrete ideas that would address some of the core issues advocates and activists have long identified. For all his apparent reluctance to jump into the fray when tempers have been at their highest, it seems that Obama may been playing the long game all along.

The NAACP speech: Obama's commitment to criminal justice reform was especially apparent during a speech he gave at a NAACP convention in Philadelphia on Tuesday. The most important aspect of the address was his insistence on connecting the problems of discrimination in the criminal justice system to systemic racism in housing, employment, education and the like. Black and Latino youth are being funneled into prisons at extraordinary rates because a host of societal disadvantages conspire against them at every turn, Obama argued. "Justice is not only the absence of oppression," he said. "It is the presence of opportunity."

He focused on explaining how communities of color are suffering from issues that start well before their young men and women end up in a courtroom or a prison cell. "Obama importantly recognized that the health and safety of communities is influenced by a host of factors, not just the presence of police," DeRay McKesson, one of the most influential activists in the Black Lives Matter movement, told Mic. He explained how overzealous policing exacerbates these problems, rather than mitigates them.

Obama's policy prescriptions were as wide-ranging as his diagnosis. He called for shorter prison sentences: "If you're a low-level drug dealer ... you owe some debt to society. ... But you don't owe 20 years.  You don't owe a life sentence." He called for more effective police training and better strategies for holding officers accountable. He announced that he's asked the Department of Justice to review the use of solitary confinement. He said that prisoners should be rehabilitated in prison, with job training programs while in prison and after they leave by connecting former prisoners with jobs.

Obama also backed the "ban the box" campaign, which aims to prevent employers from requiring applicants to check a box if they have a criminal record. Critically, he drove home the point that reform would be meaningless without more investment in communities where economic hardship leads to entry into the criminal justice system in the first place. He highlighted affordable housing, employment opportunities and education funding as preventive solutions.

Obama's speech suffered from two major weaknesses, however. One was his diagnosis of the root cause of mass incarceration, which he attributed to the incarceration of nonviolent drug offenders. That's a myth: John Pfaff, a professor at Fordham Law School who specializes in sentencing law and statistical analysis, has written persuasively that even a complete reversal of the war on drugs would still leave the U.S. with more prisoners than any other country in the world. The other major issue was the president's insistence on "community policing," an amorphous buzzphrase that can easily be used to justify the kind of invasive police presence in poor neighborhoods, known as broken windows policing, that helped kill Eric Garner. Without clarity about what it means, the term is not particularly enlightening.

More than just a speech: Nonetheless, the speech was an important step forward for the president — and just one of the notable developments that have happened this week. His clearly enumerated stance should also add extra energy to the emerging bipartisan push in Congress to pass sentencing reform.

As he closed his speech, the president remarked on the power of incrementalism that serves as a useful summary of his theory of social change. "I know how hard things are for a lot of folks — but I also know that it takes steps," he said. "And if we have the courage to take that first step, then we take a second step. And if we have the courage to take the second step then suddenly we've taken 10 steps. The next thing you know, you've taken 100 steps."

Slow is indeed better than still. But for those who have suffered the brunt of a deeply discriminatory criminal justice system, change can't come soon enough.