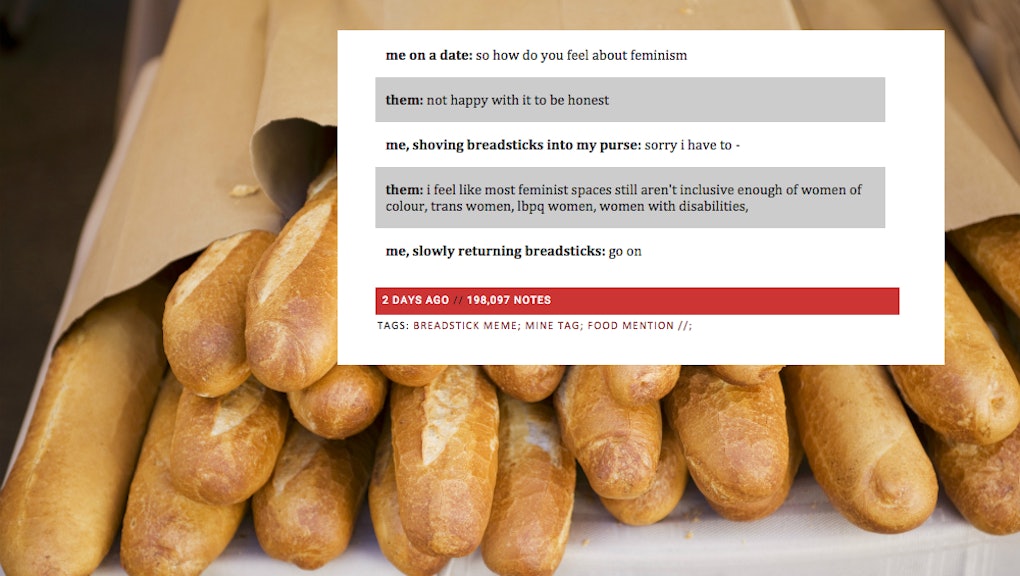 This Viral Tumblr Meme Is Here to Assure You: Your Dating Deal Breakers Are Totally Valid

Scenario: You're on a date and the person sitting across from you disagrees with you in some kind of fundamental way. For example, you make a Doctor Who reference, and your date is like, "I don't know what you're talking about and I hate you."

What's a Whovian to do?

According to the latest Tumblr meme, take the breadsticks and run.

All our deal breakers, in breadstick form: Welcome to the breadsticks meme on Tumblr, where apparently every date takes place at an Olive Garden.

Tumblr users are cleverly using the "shoving breadsticks into my purse" setup to shed light on a wide range of dating deal breakers. The vast majority of them are weirdly specific to users' personal interests, with people dining and ditching on account of their One Direction fandom status, their Fleetwood Mac preferences and plenty more niche topics we've never actually heard of.

How it started: According to KnowYourMeme, the origins of the carb-heavy meme phenomenon began last November, when Tumblr user chrisprattsgf posted about ditching a date who outed himself as a "cat person" during dinner. The post went on to gather more than 67,000 notes, although the current resurgence seems to be based on a May 2015 post from Tumblr user akeelahandthebinapartment23, who declared mismatched astrological signs as the deal breaker du jour.

But perhaps the best example comes with a spicy feminist twist courtesy of gayheda, in which (gasp!) the breadsticks are returned to the table after the date is given a chance to explain themselves.

So many deal breakers... only some of them valid: It may be silly, but the meme is based in truth: We're looking for partners with whom to share our passions. Research has also come to the (frankly, obvious) conclusion that common interests are beneficial to relationships. We want someone who looks at the world in similar ways, and enjoying similar activities leads to a general sense of harmony. In an era of vast dating possibilities, our extensive lists of deal breakers helps weed out the mismatches as efficiently as possible.

That said, when you're looking for someone to spend the rest of your life with, it's just as important to avoid the trap of being overly picky. Case in point: A disregard for the validity of feminism may be a fundamental enough difference to justify grabbing the breadsticks, but a disagreement about the best Fleetwood Mac song can probably be overcome.

Moreover, there's always the concept popularized by Paula Abdul (and, um, magnets) that when it comes to choosing a life partner, opposites attract. After all, who really wants to date their clone?

So consider which deal breakers really are worth it...and how many confused waitresses you want to leave in your wake.